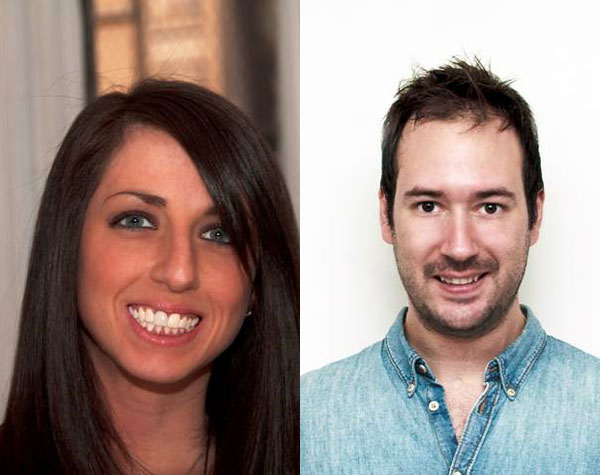 , seem to be popping up all over the industry. After graduating from

in 2010, they quickly launched their own New York-based studio, eventually hiring a couple interns and the occasional consultant. Just two years later, whether it’s at

, you’ve probably seen them around. Here, we delve deeper into their predilection for pop-up stores and their unusual creative process.

: When did you each first realize that you wanted to be designers?

Brooke Lichtenstein: I guess it was something that ran in my family. My grandfather was a furniture maker and my grandmother worked for

. Since I was surrounded by these people, I always knew that I wanted to go into a creative field. And New York was the perfect place to do it too. It’s the heart of design culture.

Yiannos Vrousgos: When I was young, I was always doodling and drawing. My family was in the fashion industry, and I grew up experiencing many facets of design. But I became jaded with fashion, and I didn’t want to go into that world. I was interested in how to implement design. For a while, I moved into marketing, merging both creativity and business. My professors told me that I was wasting my time focusing on one thing. I ended up moving here [from Greece] because I wanted a diverse education.

ID: You were two of the creators of Picnic by Design. Since that event have you been working on any new projects with

BL: We’re actually working with them on Dining by Design, introducing the event to a new generation, bringing in new faces to DIFFA. We want to bring the spirit and energy of Picnic by Design to Dining by Design through creative branding and a more lighthearted cocktail party.

YV: What DIFFA needs is a uniform visual language. We’re going to have consistency in the entrance and throughout the space. We’re also introducing a newspaper for Dining by Design, in hopes of differentiating the event from the Architectural Digest Show. It will be in full color with strong graphics. We’re hoping to distribute it to 35,000 people. 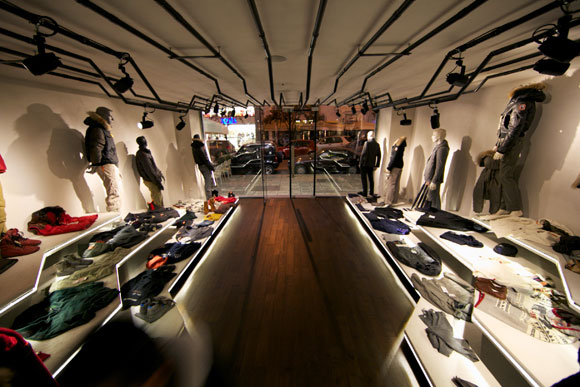 The entrance to the ES clothing boutique in Thessaloniki, Greece, by Input Creative Studio. Photo by Efi Panagoula.

ID: What are some of the other big projects on your plates?

BL: We’ve also been working on a couple of pop-up stores. Our most recent one is a series of SWIMS stores [in Greece].

YV: Our question was: How do we design a whole retail space that is modular?

BL: We’ve been working on designing a “cookbook,” a visual guide with ingredients on how to put together a space, implementing a sort of formula. We would hope to move from completing redesigning a space to acting as consultants on a space.

ID: With all these different types of projects, what inspires you?

BL: We’re inspired by the city, the hustle and bustle, and busy movement. It’s very two-faced in a way. There are spaces above ground and spaces down below in the basements. You have the old intersecting with the new. The wear of the city comes up against the pristine new places. We also look to other creative fields for inspiration. An art exhibit and the emotions it draws out can be just as inspiring as architectural work. These sorts of things inspire us to be at the same level [of excellence] but in our own field.

ID: So how do you take this inspiration and generate creative ideas?

YV: And we try to explore all the different directions we can take [a basic idea]. We start sketching, drawing out plans, making models and simulations. In the beginning, it’s all about exploration.

BL: And we finally arrive at a design concept, but this is where it gets a little weird. When we have our first design concept, we delete it and start over. If it was the ideal idea, we should be able to recreate it, but oftentimes, we find things that are better in the recreation process. We try not to get married to an idea.

YV: There’s a willingness to let go in order to find something new and better. We’re constantly questioning our ideas. 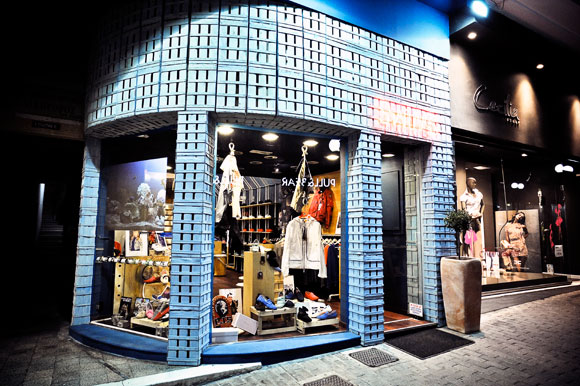 ID: How do you keep your ideas current in today’s changing design world?

YV: I don’t believe in trends. Everything is cyclical, just like fashion. We look for timelessness, hoping that something we create will be current for many years. In order to stay informed, we are constantly traveling, experiencing architecture. We start out every morning with online research.

BL: Not to mention, we are so centrally located in New York. Being in the city helps us stay informed about what is changing in the industry.

ID: What do you think are the advantages and disadvantages of being a young designer in this city?

BL: We don’t have anyone putting limits on us. We can do things how we want. We also appeal to a different crowd. Also, as young designers, we are driven by passion and a strong sense of risk. We don’t have anyone to fall back on. The major disadvantage would be people’s perception of how we should act, how our firm should look. They come in with preconceived notions about who we are.

YV: The disadvantages are fading day by day though. We bring a fresh approach to what’s out there.

ID: Does your new approach translate to your client relations?

YV: In school, we were told that we were here to serve the client. We don’t like the idea of serving; we prefer consulting. Consulting allows for a conversation between the client and the designer.

BL: And ultimately, we want to find the concept that best suits them. We don’t want them to just like it—we want to blow their minds. After we present our concept, they should be asking, “How’d they come up with that?” They should be absolutely enamored with the idea. When we present an idea to a client, we always show the final product and then we follow with the process behind it. It makes the client feel like they’re in on the process.

ID: Would you say your average client is becoming more design savvy?

BL: I think people think they are more design-conscious, but it takes a designer to be design-sensitive.

YL: The internet makes people feel like they have all the solutions at their fingertips, some steps to get toward a final solution. But they often need a designer to help realize an idea.

ID: Finally, do you have any design go-to’s, any signature design features you use?

BL: Strong angles too, and I love to incorporate flea market finds. It adds a bit of quirk and the unexpected.