From its humble beginnings in a converted loft, Alex Michaelis and Tim Boyd’s London-based architecture firm Michaelis Boyd is now firmly established on the global stage. The duo formally founded Michaelis Boyd in 1995 and quickly became known for their simple and elegant designs for hotels, restaurants and residential projects. Michaelis Boyd now has a staff of 65 and works across locations as widespread as Shanghai, Botswana and Dubai. Each space is tailored to the individual needs of the client and its context, which has resulted in a diverse output ranging from chic interiors for The Groucho Club in London and the Soho House Group to more down-to-earth restaurants for chains including Byron and Cabana.

Here, Michaelis talks about the duo’s shared inspirations, blowing the cobwebs away from outdated hotel interiors, and the importance of creating contextually relevant designs for chain restaurants. 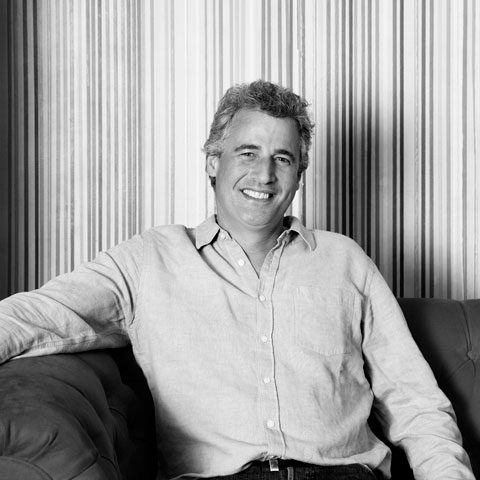 Interior Design: Can you tell us about how you met and what encouraged you to set up practice together?

Alex Michaelis: We first met in about 1985 when we were both working at John Miller and Partners. Later, I had a roof space that I’d converted and Tim came to work there. We did a couple of projects separately but then thought it would be quite fun to set up together. We had some nice jobs like the Moro restaurant in Farringdon, which was our first restaurant project, as well as a few houses. That’s how it started and it went from two people for the first three or four years to where we are now.

ID: What would you say are the key ideas you and Tim share that help to guide the work you do? Where do you find inspiration?

AM: I think the common ethos that Tim and I have always shared is a focus on simplicity and really listening to what people want so we can respond in the simplest way possible. When we started out there was a lot of over-detailing in interiors. In many of the early houses we worked on we tried to clear spaces out and hide anything we could to create very smooth wall planes and avoid having shadows everywhere. This approach was influenced by common heroes including John Pawson and Le Corbusier.

ID: You’ve worked on such a wide range of projects, from London restaurants to resorts in Africa. Is there a unifying approach that you apply across all your projects or are they all completely different?

AM: I certainly don’t think there is such a thing as a typical project for our studio. We tend to follow lots of leads for each individual project, which means they’re always going to be different. They’re led by the site, the client, the building and the brief. I quite like that when people see the projects we’ve done they often don’t realise they’re by the same firm.

ID: Which are the projects that really helped establish the studio’s reputation and are there particular projects that played a significant role in defining the direction your practice has taken?

AM: We’re probably best-known known for the Soho House projects, our work at Babington House and the Moro restaurant. My own house, the underground house in Oxford Gardens, was quite a breakthrough in underground design and got a lot of attention back in 2004. I was able to do exactly what I wanted because I didn’t have any clients to stop me. I got rid of so much clutter and kept it simple. Everyone who came loved the light, the simplicity and the flow, and a lot of people asked if I could do the same to their homes, even if they were a new build or not underground.

The work we’ve done with Soho House is interesting because I think we learned as much from the company’s founder Nick Jones as he did from us. He wanted to blow away the cobwebs from the English hotel scene and create a home-from-home where you could do anything you wanted. Our designs enabled that. Babington House, which is another hotel we did for him, is still cited by hoteliers now, 25 years later. It’s crazy that no one has done another cobweb-blowing hotel design since then.

ID: You regularly work in the hospitality industry for restaurant chains such as Byron and Cabana, as well as Michelin-star chef Tom Aikens. What are the challenges involved in designing for a brand across multiple locations?

AM: When we do chains we don’t want them to look like chains. Byron is a good example; I think we’ve done 70 and they’re all different. People love that there is consistency but they are different for each location. We’ve been saying that the day of the chain interior being rolled out and repeated is gone – people want to feel that you’ve tapped into their area and the ethos of what it is as well as giving them the same product in design terms. It’s about working with the city fabric you’ve got even though the product is the same.

ID: Projects such as those for Soho House and The Groucho Club represent the more exclusive end of your output. How has the idea of luxury changed since you set up your practice?

AM: Soho House has led a lot of the trends in luxury interior design. It influenced a shift towards a much more comfortable, home-from-home ethos that mixes old and new furniture. I actually think that concept might have run its course now, though. I think we’ve reached a tipping point and there’s going to be a return to something a little more edgy and contemporary; still comfortable but something a bit more interesting design-wise, combining products by some of the better designers around at the moment with wall finishes that are more exciting and daring. I think we can still get that feeling of warmth but with something that’s more modern.

ID: You’ve also worked internationally on projects including restaurants in Asia and the Middle East, resorts in Africa, hotels in American and housing for the Ghurka Welfare Trust charity in Nepal. When did the studio start expanding globally and what do you enjoy about these projects?

AM: About a decade ago we started working in Europe and Nepal. The work in Nepal was a charity project which came about after a client of ours asked us to go and look at care homes for the old Ghurkas. We’ve done two and are looking at a third now. It’s a great counterpoint to all the work we do in London. If all you do is work in very wealthy environments, a project like that is very grounding. It brings your focus back to what’s important, which I think is then infused into some of our designs and particularly the importance of simplicity.

ID: The studio is engaged in architecture, interiors and has also launched its first furniture collection a couple of years ago. Why do you feel it is useful to work in such a multidisciplinary way?

AM: It’s a great time to be an architect—you can do anything you want. I think the days of describing ourselves simply as architects are numbered. It’s going to be fascinating over the next 20 years to see how people define themselves because simplified definitions like architect, interior designer or graphic designer are going to become blurred very quickly. Our clients still come to us predominantly for architecture and interior design but it’s only because they don’t realise that everything can be done in the same design studio. It’s about developing an ethos that can be applied to anything creative and I think that will start happening soon.

ID: You’ve designed interiors for the 255 apartments being built as part of the redevelopment of Battersea Power Station in London. What can you tell me about progress on that project?

AM: It’s a slow process but it will be amazing when it starts coming together. Everyone who’s bought will start getting very excited when they can see the spaces that are available. The design has stayed very true to what the building was and the existing building will be visible wherever it can be. Our approach has been led by the two phases of the construction and trying to nod to what the building is about; fine detailing and brass like you used to get in all the control rooms, timber floors, brickwork, black steel. There’s quite an industrial feel to the interior design which everyone seems to have loved and bought into.

ID: What are your hopes for the future of the studio?

AM: I’m really happy with where we are at the moment. I don’t want to grow much bigger because then we’ll stop detailing things. The market we want to be in is smaller buildings, hotels and new builds of a certain size, because when you get past a certain size the detailing can be lost. I don’t want to get into that situation so the hope is to keep working on fascinating buildings where we can have a strong relationship with the client. The detail is essential so we’ll be very careful not to accept anything we could lose control of.