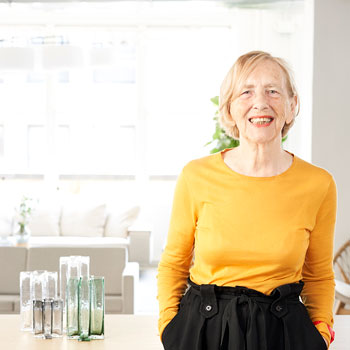 It’s taken almost 60 years, but the world seems to be finally catching up to the pioneering designs of Bodil Kjær. Born in the Danish countryside in 1932, on land owned by her family since at least 1400, Kjær trained as an interior architect at Copenhagen’s State School of Interior Architecture. A sojourn in Boston in 1958 sparked inspiration for her epochal collection Elements of Architecture, including The Desk, immortalized in several James Bond films. Kjær later joined the engineering firm Arup and helped pioneer flexible work environments that went on to fundamentally shape the way we work today, before joining the faculty of the University of Maryland.

Kjær recently retired and returned to Denmark, but her prominence is only increasing. This spring, Suite NY has released 10 key Elements of Architecture pieces, reproduced by major manufacturers including Carl Hansen & Søn, Illums Bolighus, Karakter, and Holmegaard. We sat with Kjær on The Couch to talk about seeing her work on the silver screen, in modernist buildings, and once again on showroom floors.

Interior Design: What was the original inspiration for Elements of Architecture?

Bodil Kjær: In 1959, when I was 27, I was an interior designer doing commercial jobs in public buildings. And I often found there were problems I could not solve by specifying something from a catalog. So I sat down and solved the problems—functional and aesthetic problems—by designing new objects that had the same sort of visual language as the buildings. I was looking for a connectivity, with the same sort of feel as the new architecture.

ID: How did the architects respond?

BK: First was Paul Rudolph. I’d visited him and Yale and I knew he wanted my furniture, but he didn’t like my legs! (Laughs.) So I made new bases for him in the same materials as he used in his buildings, though they weren’t nearly as nice. The bases also needed to be flexible, to give. So I chose steel and bent it. And then I saw that it bent too much, so I gave it a counter-curve. In order to test these things [in our Boston office], we invited the whole group of football players from MIT and gave them Budweisers and let them bump around for a bit—and we could certainly see the bases flex! And then a few years later Marcel Breuer specified 27 of the sofas for a building in New York City.

ID: And around this time, you returned to Denmark. Why?

BK: I was kicked out of America. I was sponsored by the American-Scandinavian Foundation, which was only for two years. I cried into my pink champagne at the going-away party. But that was life. I opened an office in Copenhagen and told my boss back in Boston that the designs were mine. So I got the rights to them, not only in America, but for the rest of the world!

ID: Just in time for your first major success, which was the Desk. What inspired it?

BK: I 1959 I found that managers were thinking in a totally different way. They were team members, instead of bosses. And so you still need a desk as a manager, but one your team can sit around. Get rid of those ugly pedestals, get rid of that high-back chair that looks like a throne! And for the drawers you have to have a key, and you have to have a handle, so why not use the key as the handle? The base consists of three pieces you can undo and lay flat very easily—that wasn’t invented by IKEA, but by my generation. The first one was made in 1959, in ashwood with brushed steel for MIT. The second was for Polaroid, and I decided we ought to give them orange legs. And then of course it was soon discovered by politicians in London, and ended up in the James Bond films.

ID: What was it like seeing your work on the big screen?

BK: The first one was From Russia With Love, and I went to see it alone. I was so shocked to see this nasty man sitting in it with a cat. I had to go have a drink. Then, by 1965, I’d moved to London and realized the movies were satire. I liked them then! I went to see You Only Live Twice with two guys. We sat down, the titles come on: there’s the Buckminster Fuller dome. Inside sat the Russian, the Englishman, and the American, and each is behind my desk. And I was so shocked that I stood up in the middle of the theater and said, “Look at that, me and Bucky!” I was as much impressed being inside a Buckminster Fuller as anything else, because he’s one of the few people I really admire.

ID: Another big hit was the Cross vase—what was your thinking behind it?

BK: It was the same philosophy: why, in beautiful modern buildings, must we have fancy, sweet little vases? Why not have something that speaks the same language? Also, do you really need a whole bunch of flowers? Why not just take a branch from your garden? So it became the kind of vase that you can plonk anything into and it will stand the way it stands in nature.

ID: How do you think efforts to end sexism and promote diversity in the design world are going?

BK: Several centuries ago, my forefather married a lady called Anna Kjær. She insisted that he change his name to hers, because she was richer than him. So I come from a long line of people who have been their own bosses. Women in the countryside were just as important as men—it was during the industrial revolution that women became things you kept at home.

ID: Is that something you’ve experienced in your career?

BK: I was very lucky, because in my family women were used to doing what they want to do, so I got the education I wanted. And in England and Italy, which are the two countries I really have experience working in, I do think a well-educated woman is respected. In America, it’s a different story. And in Denmark… this whole idea that we in Scandinavia have solved all the problems is for the birds.

ID: Has revisiting your early work made you think about things differently?

BK: I spent many nights awake, thinking about it, and it was very painful to dip into the past. It took me three months to sign the contract. Now that the things are reproduced, it’s really nice. They are good ideas! I remember sitting in a loft on top of one of the brownstones on Newbury Street, designing these chairs and thinking, “That’s going to be nice!” You know very well when what you are doing is good, or when it’s bad. You know when you’ve made a goof.

ID: Your 1959 Indoor-Outdoor furniture series certainly was no goof. What does it mean to you to have a company like Carl Hansen bring it back to life?

BK: I designed it because I wondered, why have two sets of furniture? Why not make it in a quality you can use indoors and out. Carl Hansen bought a new factory just to build these. That’s something I like!