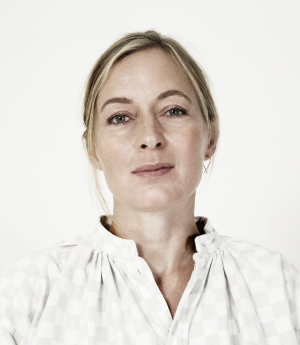 Cecilie Manz has created everything from ladders that double as chairs to speakers you can tuck into a tote bag. No matter the client—and she’s worked with the best, including Fritz Hansen, Muuto, and Duravit—Manz’s work is unmistakable. Her preferred palette is neutral but surprisingly warm, her lines efficient yet witty, all with the same relaxed sense of confidence Manz exudes in person.

After training at the Royal Danish Academy of Fine Arts and the University of Art and Design in Helsinki, Manz established her own Copenhagen-based studio in 1998. As commissions arrived, so did awards: in 2014, she won the prestigious Crown Prince Couples Cultural Award, and this January, Maison et Objet crowned her its Designer of the Year. Manz gave us a tour of her exhibition at the fair, which gathered tableaux of her work and inspirations in a sort of mid-career retrospective, then spoke to us again from her base in Copenhagen about materiality, social change, and the usefulness of stupid questions.

Cecilie Manz: Definitely something with clay. I more or less grew up in my parents’ ceramic workshop. I saw it all, from soft material to hardened porcelain you could drink from.

ID: One of your first designs to attract attention was the Caravaggio pendant for Lightyears. What inspired it?

CM: I had the lamp design before its name, but when I was looking at the lamp’s high-gloss surface and red detail, I thought it had characteristics of a Michelangelo Merisi da Caravaggio painting: the dramatic light and shadow, his use of a sudden red in all the darkness.

ID: And your work for Bang & Olufsen, how did that come about? Are you an audiophile?

CM: I listen to music, but not in an obsessive way. I just did a lot research, and then I paid attention to what the engineers told me. I think that’s quite important: if you listen, you will learn. And that can be the adventure—not knowing—because then you can pose a lot of stupid questions and really get knowledge!

ID: How did you approach this retrospective for Maison & Objet?

CM: The honor was really nice, but the treat of being able to do an exhibition was the best part for me. It offered the chance to do actual creative work, with a deadline. I’m not afraid of the blank white paper—you can always toss it out and take a new one.

ID: During your acceptance speech for the Designer of the Year award, you talked about how the design world focuses on the legacy of Danish design, but often ignores people working today.

CM: I wanted to emphasize that there’s so much focus on old masters, and that’s really well-deserved. But there are also designers working now, being present, and leaving room for the future.

ID: Were you also alluding to the way women have been denied opportunities in the design world, like everywhere else?

CM: In Danish history I think women had a tough time. They were left alone with the kids at home, so they really had to fight for something. We have much better conditions now, though we do have the normal struggles that come with being self-employed, and so on.

ID: Does design have a role in changing culture?

CM: It’s really about society. It’s about basic things like day care—if there is no day care, what is there to do? If women receive 10 years of university education and then have a child, they often can’t return to work. So there’s a need for a change in structure, and that doesn’t happen overnight.

ID: To your mind, is there even such as thing as “Danish design” now?

CM: If I must characterize it, Danish design is about the sensibility toward materiality. Which material goes where, and why? It’s not so much just to say, “Let’s use brass now because it’s trendy,” but to use the right material in the right place. And also to see pieces as whole, so that for example you can turn a chair upside down and it will look nice from below.

ID: If you could change one thing in the design industry, what would it be?

CM: Perhaps quality. If we do high-quality products from the start, we do not need to manufacture so much new stuff, and of course the whole pollution aspect would be nice to solve once and for all. There is so much to do.

ID: Is there anything you’ve seen and thought, “I’d like to redesign that?”

CM: I often see designs where I wish I could correct it a bit. I think it’s a work habit. We see things differently, with professional eyes. This is also motivation to do better whenever I design something new: to do my best so no one wishes to correct it!