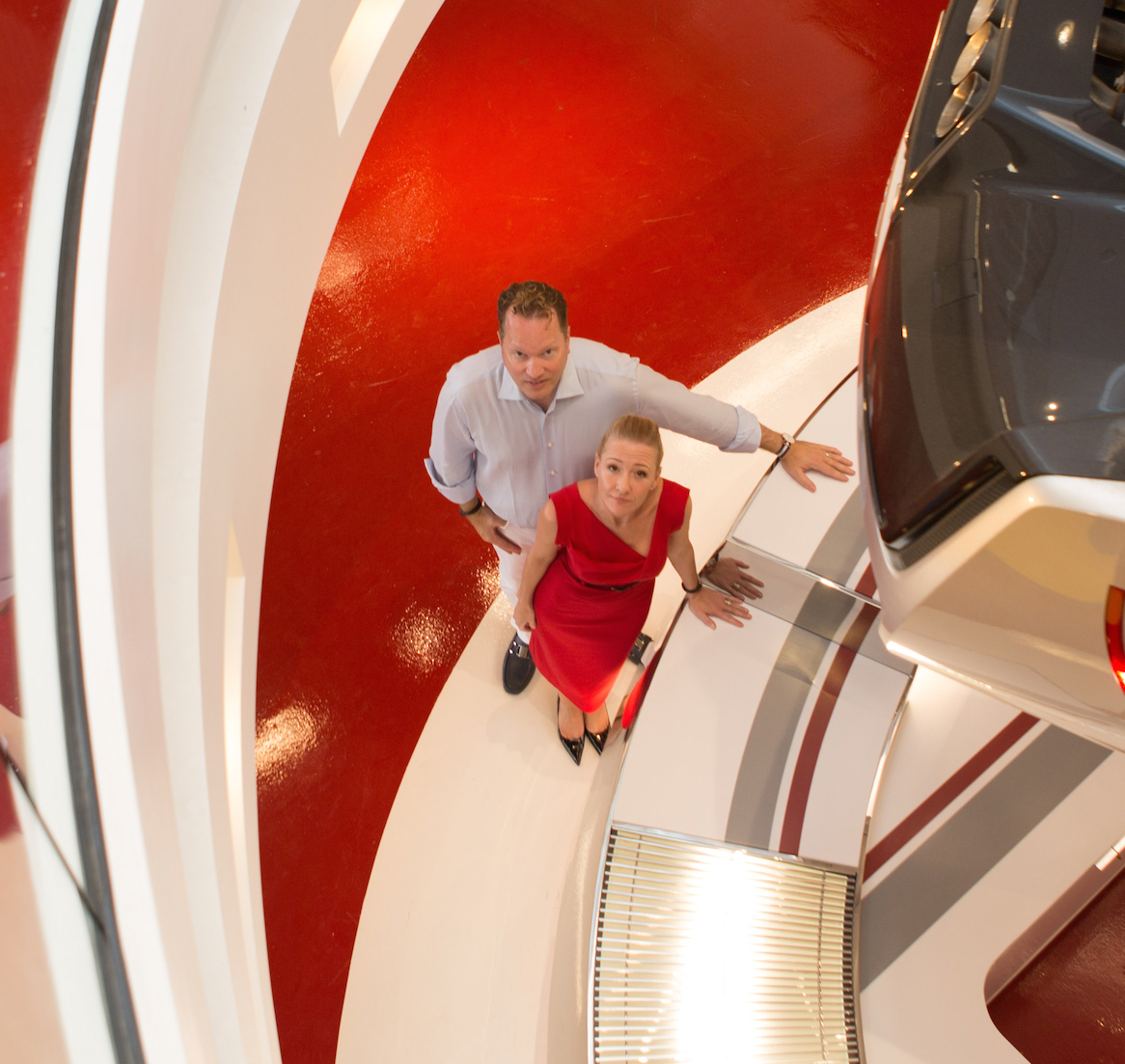 Chris and Sandra Mitchell lived on the same street in Philadelphia and took classes in the same building at the University of Pennsylvania. They never knew each other. They met at SOM in New York, where their first date was chronicled by none other than Bill Cunningham on Fifth Avenue. We met them in Los Angeles, first with Studios. When they formed M+M Creative Studio in 2010, they were basically commuting back and forth to China. That was partly for the reason for their move to Las Vegas. Chinese clients were frequenting Sin City for dinners. With the Edmunds.com headquarters, featured on the cover of our October issue, the Mitchells have circled back to LA and may continue to do so. Keep your eyes on the road for the company’s third installment.

Chris: Southern California mainly, with additional pit stops in Colorado, Michigan, and finally, Connecticut. I went to the beach and Disneyland all the time during the summers as a child and teenager. I learned about people, wayfinding, and branding, without even knowing it.

Sandra: Philadelphia and Cape May. Similar to Chris, my summers also included beaches, but the East Coast version, with linear boardwalks and sculpted sand dunes. I studied drawing and painting from an early age; color, light, and shadow have always been an integral part of my design palette.

Chris + Sandra: Recent projects for M+M include Edmunds.com’s downtown Detroit office (an Interior Design Best of Year Honoree), as well as several in China, which include the International Transit + Logistics HQ in Yiwu, for a Chinese developer/Dutch consortium, the ‘Ribbon Residence,’ a planned carbon-neutral, mixed-use development in Hangzhou, and the masterplan for the Qiandao Lake Resort Hotel Spa and Villas.

Chris: Searching out rare and hard to find Matchbox cars—talk about unearthing a whole new sub-culture.

Sandra: Collecting art by Nevada-based artists that inspire me. There is something wonderful about the essence of light and the colors that comes out distinctly in their work.

Chris: Pen (Pilot Fineliner, black ink). A teacher once told me that I draw “too well.” I have to say that I haven’t found that to be a problem—when I meet international clients where I don’t speak the language well enough, it’s amazing how we can all gather around and find common language in a sketch.

Chris: My music collection (and headphones) for long-haul flights to Asia.

Sandra: Coco Chanel suite at the Hotel Ritz in Paris.

Chris: I have this obsession for things and places that move through space, so designing the interiors of a jet plane, a motor yacht, and a bullet train would check a few boxes off on my list.

ID: Best thing about your job?

Chris + Sandra: We have a unique partnership where we truly complement each other’s talents and strengths without pretense or competition. As we’ve been married for 19-plus years and have worked together, side-by-side, every day for 15 of those years—clients receive the inherent value of that focus and resolve.

Chris: Miss most: Open-air newsstands with every magazine imaginable; I could browse there for hours. Miss least: The freeways, they’ve changed only marginally since I was a child.

Sandra: Miss most: Walking my cocker spaniel, Bailey, in the lush park across the street from the Beverly Hills Hotel on early misty mornings. Miss least: It always surprised me how close everything seemed in LA, but in reality took forever to get to and from.