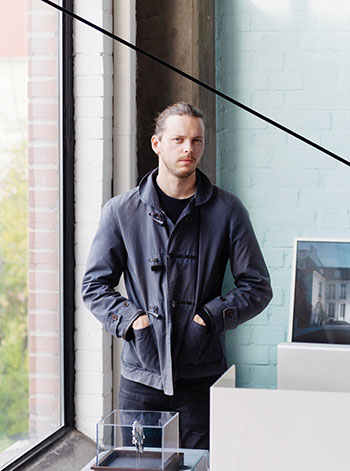 When asked about the progression of his work, Norwegian designer Daniel Rybakken says you can see a red thread winding through it—one that taps a childhood seeped in fashion and graphic design and transitions into art, lighting, furniture, and soon electronics, yet remains true to one vision. Coincidentally, his namesake design studio also inhabits an early-19th-century thread factory. The first Scandinavian designer to receive a Compasso d’Oro, Italy’s oldest design prize, Rybakken has worked with manufacturers including Luceplan, Artek, and Wästberg, among others. He sat down with Interior Design to share what he considers his final result (hint: it’s not the product), why he lives in Gothenburg, Sweden, and what artist he admires for his “stylized strangeness.”

Interior Design: How do you think your upbringing influenced your design sensibility?

Daniel Rybakken: Other than being from Norway, both my parents were designers—my mother in fashion and my father in graphic design. My work is quite graphical. As a child, I always wanted to be an inventor, but I had all these things from my parents: interest in the aesthetic, composition, and what design communicates, what with my father working with identities for big companies. If you combine that with inventing new products, you get what I do right now.

ID: So you’re driven more as an inventor.

DR: Creating something new is what pushes me. You have to survive… but it’s not the money that drives me. In Scandinavia, you are privileged. We have a very strong social safety net here. It’s easier to work as a designer. Otherwise, I think I would be a plumber… you can make a lot of money in Sweden as a plumber!

ID: Could you name a few products that have been particularly significant to your career?

DR: The Compendium for Luceplan sells the most, but I think I will be remembered for the Counterbalance light, my first industrial piece, which Luceplan launched in 2012. Before that, I created more conceptual pieces, bordering art and design. Now there are many graphical, slender, black, and geometrical silhouette lamps on the market, but not back then. It has this mechanical element that you move up and down—the idea of a counterweight—and it won several awards.

ID: Can you describe a few recent products?

DR: I recently designed my first furnishings, the 124° wall-mounted mirrors and the Kiila collection of small furniture objects for hallways and entrances, both for Finnish manufacturer Artek—these were challenging projects. For Luceplan, I followed my own design language. But for Artek, you need to think about the company’s heritage with Alvar Aalto and Finnish design history. The goal is to figure out what a contemporary Artek product should look like, and how many Aalto elements should be moved forward.

I’ve been playing with mirrors for a long time and 124° is about reflection of light, so it has a strong connection to my previous work. But the Kiila collection, which consists of “domestic helpers” with its bench and coat tree, was completely new—my first project with wood. I didn’t want this kind of Danish meeting with wood—soft joints or parts that had to be worked on with sandpaper. It needed to be much more logical and sober. That’s also what Artek and Modernism stand for: putting decorative elements aside and rebuilding Europe after World War II with a logical, reasonable approach.

Another recent product is the W172 Bokeh floor and pendant light, available this spring from Wästberg. I worked with the transparency and the ‘not transparency’ of frosted glass… something that is close to a piece of frosted piece of glass, but the further away from the glass, the more blurred it becomes. It’s rendered in quite high detail. “Bokeh” is used within photography and it comes from the Japanese word bokashi which means blur or haze.

ID: What are you currently working on?

DR: I just returned from a six-month parental leave and am working on everything from lighting to furniture to consumer electronics. I am collaborating with multiple furniture companies and a Japanese technology company, but I really can’t say more.

ID: So you are a Norwegian based in Sweden. What made you move to Sweden?

DR: I’ve lived in Sweden for roughly 10 years and have seen a big shift. When I started out, it was important to leave Norway as a designer. Not many Norwegian companies wanted to work with designers. I interned at a studio called Norway Says and back then it was me, that studio, and a couple others in industrial design. So I started my career with more conceptual pieces because that was the way to go in Norway. In Sweden, you have so many companies that you can work with.

ID: How do you get your inspiration?

DR: I am very specific about my influences. Since university, I’ve seen that there are products that are always the same. It’s always the same design language and expression. That’s because if you all read the same design blogs, the output will be the same. I live in Gothenburg, not Stockholm, and that for me is a retreat. I sit in my studio and think. Designers in Stockholm all have studios in the same area, shops with windows on the ground floor, and all their awards in those windows. It becomes competitive. In Gothenburg there’s nom need to compete. I travel frequently, so I also get input from places—Japan, for example.

ID: Is there someone in the industry that you particularly admire?

DR: My father was interested in the German consumer products company Braun and Dieter Rams, who designed many Braun products. Donald Judd was very much in the same category within art. The simplicity of Rams and Judd rests well with me and many other Scandinavian or Nordic designers. Judd’s wall-mounted galvanized iron boxes entrance me the most. Not necessarily the repetition of the boxes, but the layers. Also his furniture.

DR: I’m quite interested in photography. I just ordered “The Construction of an Image” by Bas Princen. I take many of my own photographs because I consider the image—not necessarily the object itself—my result. Design is about communication and the object is communicated through images. Buildings, installations, or objects can be temporary things. What lives on and has the story behind it is the image.

ID: Do you have a photographer that you really admire?

DR: Thomas Demand. He’s more an artist, so it’s more about the very stylized strangeness. His work is always made of cardboard and he has these everyday scenes photographed so they look real—the water, the wallpaper, all cardboard. They are incredible images.