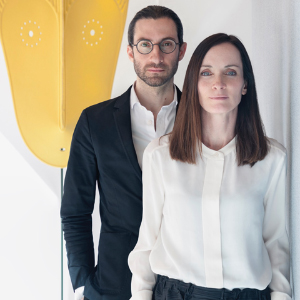 Both living and working with your partner can be challenging, but the minds behind GamFratesi say this dynamic gives them only advantages. “There’s immense tolerance and patience… maybe we wouldn’t have that with just a colleague,” says Danish architect Stine Gam. Adds Italian architect Enrico Fratesi, “We have the liberty to come with new ideas that are quite unexpected.”

The husband-and-wife duo, who met studying architecture in Italy, now have two sons and live in Copenhagen. Since founding their firm in 2006, they’ve gone on to design products for the likes of Cappellini, Gubi, Louis Poulsen, Porro, and Lightyears. More recently, GamFratesi has garnered praise for its restaurant interior design projects.

For the 2018 edition of IMM Cologne, the couple reimagined Kvadrat’s stand at Design Post with a system of upholstered wood panels that, like blinds, offer a peek inside when tilted. Interior Design sat down with both GamFratesi principals at the show to hear about recent projects and more.

Interior Design: Maybe you could tell us about the showroom you’ve just unveiled for Kvadrat.

Enrico Fratesi: The space will be Kvadrat’s showroom for the next two years. It was very important to think about the location, surrounded by other showrooms in Design Post’s open format. The idea was to make it both an open and private space. Since it had to be very clear that it is Kvadrat’s space, textile is the main element. We created a wing system that you can open and close, if you pull the wire down. Inside we created almost a cafe or a home  environment where you can sit, think, and work.

Stine Gam: We chose the color blue, and then went through the collection and tried to find as many blues as we could. It is also made to be easily changed. Next year, it could be a different color.

ID: How did you land the project?

ID: Can you describe a few recent projects?

EF: One project that has been very important to us and has won important prizes is Maison du Danemark, which we did last year. The house is in Paris, but we had to create an environment that is connected to Denmark. On the upper floors, there’s the cultural center, and downstairs we did two restaurants, Flora Danica and Copenhague.

Then there’s the new products we did for Milan last year, the Yuh light for Louis Poulsen has been very successful. We also added new bases and frames for the Beetle and Masculo chairs for Gubi. We have a new chair as well for Gubi which we will launch in Milan this spring.

SG: We have been doing window displays for Hermès in Japan for a couple of years now. It started out with a few and now it is basically all Hermès windows in Japan. This past season we did 105!

ID: How do you feel your Italian and Danish combination influences your design sensibility?

EF: We are very lucky that we’re both coming from two strong design traditions. Both Italy and Denmark have a very big history when it comes to design. We try to combine these influences, but it is always in a spontaneous way. Aesthetically, our work aims to be honest, humble, and natural.

ID: You only recently started doing interior design. What made you go down that path?

SG: It was only in the last year that we specialized in interior design. In the first years of our profession, we worked a lot with our hands, we were often training with manufacturers or workshops to get the detail completely right. We were invited to do our first interior because the client started with our products, then said why don’t you try and create your own ambiance, instead of someone else doing it? And then we did, and it was very personal and interesting to us.

ID: How do you start your design process?

EF: In the beginning, we’re trying to express what we want to achieve, what the vision is behind the project. We start with hand drawing, then we go to computer drawing… then back to sketching. It’s a back-and-forth. But usually everything starts with talking.

ID: Is there a person place or thing inside or out of the industry that inspires you?

EF: We try to find inspiration from different industries. For example, the display for Kvadrat resembles wings from early aircrafts, so it can be connected to the mechanic world, but not directly the design world.

ID: So for example, for the Beetle chair for Gubi, were you inspired by beetles?

EF: The idea was to create a chair with flexibility, and then for the shape we wanted something quite gentle. The beetle has this configuration. So we didn’t start specifically looking at the insect, but when we were looking for references, we turned to it.

ID: What is it like working as a couple?

EF: The creative part is not something that you can only do during office time. Of course, we are together most of the time when we are not at work. So this lack of limitation on time—I think that is kind of the secret to unexpected solutions.

SG: As a couple, everything is quite intimate. We can be more open to discussing and talking. It is kind of going on all the time. But sometimes my ideas come at a bad time.

SG: I am a shy person. Maybe that is also why it’s good that he is my partner, because if it was anyone else I would be too embarrassed to say, when everything is finished and ready to send, ‘Oh, can we change this?’

EF: If I do not agree, then we can keep it the way that it is. But often when she points it out, I see it. So we change it. But it is a bit late sometimes.

ID: What of your products do you have in your own home?

SG: Traveller, the daybed we did for Porro. Unlike a sofa, it has two ends and no back. Generally now everybody looks at the TV, but with this small gesture, suddenly you look at each other—it invites dialogue. You can’t help it—if you look at each other, you start to talk. It’s often all four of us a sitting there, talking, playing a game, or reading stories.