aesthetic—eclectic though its manifestations may be—has a few distinct threads running through it: clean lines, conceptual openness, a willingness to dare. Allen, principal and pioneer of his eponymous firm (which he established upon received his graduate degree from

in 1993), has made a name for himself on numerous fronts. As a furniture designer, he has created work for

; and as a lighting innovator he’s worked with

. He’s contributed product design to clients such as

, and his packaging concepts have earned him numerous awards. (

are a handful of brand that have commissioned his perspective.) An accomplished residential and commercial interior designer, he has created noteworthy store concepts for

, as well as studio spaces for the likes of

Here, he talks about his most recent recent collaboration with graphic designer

to create the exhibit “Life On a String: 35 Centuries of the Glass Bead,” on view at the 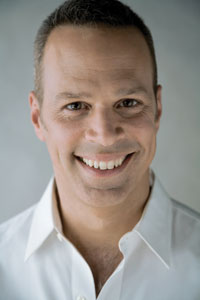 Interior Design: Harry, your current exhibit with Corning Museum of Glass covers a vast history, and has proven to be very stimulating and engaging. What’s it like to collaborate with CMoG?


Harry Allen: There’s a very technical side to glass; as a designer, it’s an interesting challenge to work with just this one material. I’ve worked with CMoG on a variety of projects over the years, including the GlassLab—a mobile glass-blowing facility on a flat bed truck, where they invite designers to work with them. For this show, “Life On a String,” I worked with my friend and colleague, the graphic designer Stefan Hengst. The cultural significance of beads hadn’t yet dawned on me when we started, and what I came to learn was so interesting. While the focus was narrow, in that we were focusing on the bead, the content was really broad. When one designs an interior one always takes into consideration how people will move through the space, but designing a museum exhibition is more like writing, or storytelling. The show has a beginning, a middle, an end, and it even has chapters. Its got a thread that the curators have worked out and it must be clearly presented to the viewer. It’s a very complex formula.


ID: What did you take away from this experience?


HA: The material was all so new to me. I knew nothing about museums, or beads for that matter. It was honestly a huge learning curve, on all levels. It did allow one fantasy to come true: I’ve had this idea for a couple of years of doing a really colorful interior—something I thought would probably end up in a store, or in one of my more substantial interiors. However, very strong color is hard to get a client to agree to. A temporary exhibition is a great forum to use saturated color, rather than convincing someone to live everyday with fiery orange walls.


ID: How did you enjoy working with Stefan Hengst?


I don’t collaborate a lot, but this show with Stefan—the whole graphic exploration of it—was really fun. He makes wallpaper and is a great graphic designer. He brought incredible talent to the table. Graphics were so crucial to the success of the exhibit, and I think we really pulled it off.


ID: You mentioned that you knew very little about how it would come together at the outset. Is that intimidating for you, or a fun challenge?


HA: I love that—walking into the room and being really stupid and having clients with all the knowledge, yet you have a fresh perspective. In this case, the curators put together this show that they know everything about, and I walked in and I knew nothing. I asked a bunch of idiotic questions that made them think about what they were doing. Mind you, I have been to a lot of great museum shows, but it was a new joy to create one. The people at Corning are so passionate about what they’re doing. It’s done for love, not money.


ID: Why was this exhibit important for you as a designer?


HA: As with anything, I try to learn from one project and take it to the next. The sad thing about exhibitions is that they come down—they’re temporary. But now I would love to do something along these lines in a more permanent way.


ID: You’re nothing if not prolific, with projects across a lot of disciplines. Do you ever scratch your head and wonder what to do next, or is it the opposite?


HA: I’d love to have enough time to explore every interest I have. I can remember when I first went to design school, and wondered if I could still come up with ideas a decade or two down the line. Now I lament that there are only so many hours in the day. It’s funny, though, how things you’ve been dying to do. . .eventually make their way around.


ID: Your product, packaging, and brand identity work is a big component of your career. What kind of dynamic do you like to strike with your clients in that arena?


HA: Perhaps it’s my training, but I’ve never been the designer who wears the cape and says, “It’s my way or the highway.” I’m a worker. I have two sides to my work—on one hand it’s about making things in the studio upon which no one has input. On the other hand, there’s sitting around the table with many creative people, all of whom have input. I like both ways. Sometimes you’re working with someone who wants you to play the magician and other times you’re with someone who wants to put in lots of effort. I just go with it.


ID: Is there a point at which you wish a client would defer to your decision making?


HA: That depends on the client. Most of my corporate clients have a real knowledge about what they make and I benefit from that knowledge. But the general public should trust a little more. There is so much fear of change. I think it’s a good thing that people have more access to information about design, and know what’s available out there. However, I also think it’s confusing, because the world at large is not designed with a critical eye. A professional has developed a critical eye. In order to decide you want this as opposed to that, you need to have a wide perspective. Think about it: You would never collect art without educating yourself, and yet because a person has InDesign they think they’re a designer.


ID: Was there any moment in time when this perspective became clear for you?


HA: On occasion I design residential interiors, but the process can be a little frustrating. You make a selection of furnishings, the client gets overwhelmed, and their friends go, “I don’t like that,” and they listen to their friends rather than me. Even my mother is guilty; I’m helping her put her house together right now after Sandy and she will ask the contractor, or the shopkeeper, what they think about the design. I guess its human nature, fear of the unknown. I have a hard time waving my magic wand and saying, “Buy all these things,” because I like people to be invested. I always thought I would be the smartest person in the room and clients would say, “Oh wow.” But what their friends think is more important. This actually informed my product design. Now I imagine these clients shopping and looking at my designs.


ID: How do you get inspired today, and how has that changed since you were young?


HA: Inspiration constantly changes if you’re a designer or interested in culture. I’m constantly looking around for inspiration in all the arts. When I was young I was really inspired by artists like Donald Judd and Sol LeWitt. Now I’m more inspired by other art forms, things that are going on around me. I remember how Philippe Starck was king when I was in grad school. He was burning up with the diversity and widespread presence of his work, and everyone aspired to that. My career has been different, of course, but it has all turned out great, as far as I’m concerned. It’s always a surprise where life takes you, isn’t it?