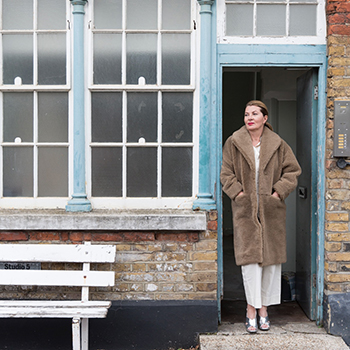 “The line between my work and life is thin to nonexistent,” says British designer Ilse Crawford, who lives above her studio with her husband in a converted tannery warehouse in Bermondsey, London. Before founding design studio Studioilse in 2001, Crawford studied history and worked as a design journalist, launching Elle Decoration UK in the process. Today, with high-profile interior projects including Soho House New York and the Ett Hem hotel in Stockholm under her belt, Crawford incorporates a love of history and editing skills on a steady influx of commercial and residential projects, as well as collaborations with manufacturers Georg Jensen, Engblad & Co, and Zanat, among others. Recently, Crawford launched a rug collection for Swedish manufacturer Kasthall, which was previewed during Stockholm Design Week in February and officially unveiled at Salone del Mobile in Milan. She sat down with Interior Design to share how she made the move from editor to designer, what drives her interiors, and what item in her home everyone immediately jumps into.

Interior Design: What distinguishes your Kasthall collection from other contemporary rug collections?

Ilse Crawford: Its starting point was the green around the factory, or the Swedish green, which has especially strong meaning for a country that isn’t green that much a year. I started thinking about how we are using so many more plants for both private and contract projects. Carpets that would work in those environments were missing. Today, green is a neutral. We essentially took one color idea and explored it with Kasthall through all their different manufacturing techniques. There are six rugs, but they’re not similar in the slightest. Kasthall was prepared to research and develop with us in colors, materials, weaves, and sampling.

The idea is one thing, but it’s nine-tenths execution, so we really rolled up our sleeves. Often, designers throw their work over the wall and don’t get the chance to do as much research and development as we did. Good textiles are as technically challenging as any piece of furniture to make, if not more.

IC: Quite a range. We are working on residences in Canada, Sweden, and Russia. In Rotterdam, we’re renovating a 1950s residential building by adding a clubhouse that includes a work space, cafe, shared kitchen, roof garden, and all sorts of added value. In London, we’re working on a family mental health center. We researched and asked ourselves if it should be brightly colored, upbeat, and optimistic. We talked to families who want something solid, familiar, and lasting. We’re making this project very warm, reassuring, safe, and welcoming.

Our recent products include the Atmospheres wallpaper collection for Engblad & Co and a new range for Georg Jensen. We’ve also been working with Bosnian company Zanat to create products that would find a new market and preserve the brand’s wood carving skills, which recently received a UNESCO Intangible Cultural Heritage listing. With Zanat, we introduced the Touch collection, which has a cabinet, console, table, and series of stools.

ID: How do you believe your childhood in the U.K. influenced your design thinking?

IC: My dad, an economist and economic journalist, raised me to question, analyze, and observe. Creativity came from my mother’s side—she was very free thinking but also let us make things. That combination was very influential. I was always interested in how interiors influenced the way people behave, and I noticed how people acted in our house versus others.

ID: What catalyzed your transition from journalist to designer?

IC: Journalism made me see what was missing, which really fascinated me—how one could design interiors with warmth and humanity—qualities missing from many. I was also drawn to making things that lasted and really impacted people. I saw that good design followed through on all decisions and touch points that spoke to the whole system. Good design is not just a look or an idea, but an integration of all those things, the whole system, the whole journey.

ID: How did you make that crossover?

IC: I was lucky to encounter several brave people. Donna Karan asked me to run her lifestyle division because she read my book The Sensual Home. She trusted my vision and wanted me to translate hers. Then, Nick Jones from Soho House trusted me to work on Babington House in Somerset, England, in 1998, and asked me to do Soho House New York, which opened in 2003.

The skills you have as a journalist—sifting through an incredible amount of information to make good decisions, good analysis, being able to visualize and communicate those narratives—are necessary as a designer to win trust and carry clients on a journey which may take years.

ID: Do you have an interiors pet peeve… something that really makes you cringe?

IC: Copy/paste. Ultimately, good design comes by following the journey. It’s a process, not a look. When copy/paste happens, the project burns itself out really quickly. On projects based on specifics you embark on that journey.

ID: Do you have a book you recommend?

IC: “A Pattern Language: Towns, Buildings, Construction” by Christopher Alexander. He’s a contemporary of Michael Pollan, who I admire enormously. “A Pattern Language” is basically the universal truth of people and buildings, revealing the spaces that both comfort and discomfort us.

ID: Is there a contemporary interior you admire?

IC: Kettle’s Yard in Cambridge, England. It just reopened with an extension by Jamie Fobert. It’s a gallery designed like a home but given a new lease on life with this addition. It was originally done by curator Jim Ede, then had an extension done by Leslie Martin and David Owers. I love how it evolved over time yet still kept its character. While it shows objects and paintings in a very domestic way, it feels modern at every point. Everything is somehow in the right place, and that makes you look at art or ancient objects without even realizing it in a way that helps you appreciate them.

IC: The graduation show at the Design Academy Eindhoven, where I teach. It’s a place to discover the next generation of designers, and I attend every year.

ID: A product in your home that you really love?

IC: Our chinchorro, which is a looser knit version of the hammock, in the living area The design is thousands of years old, but it’s hard to design a better one. When kids come, they jump in. When fancy clients come, they jump in… Everybody wants to be in that hammock.