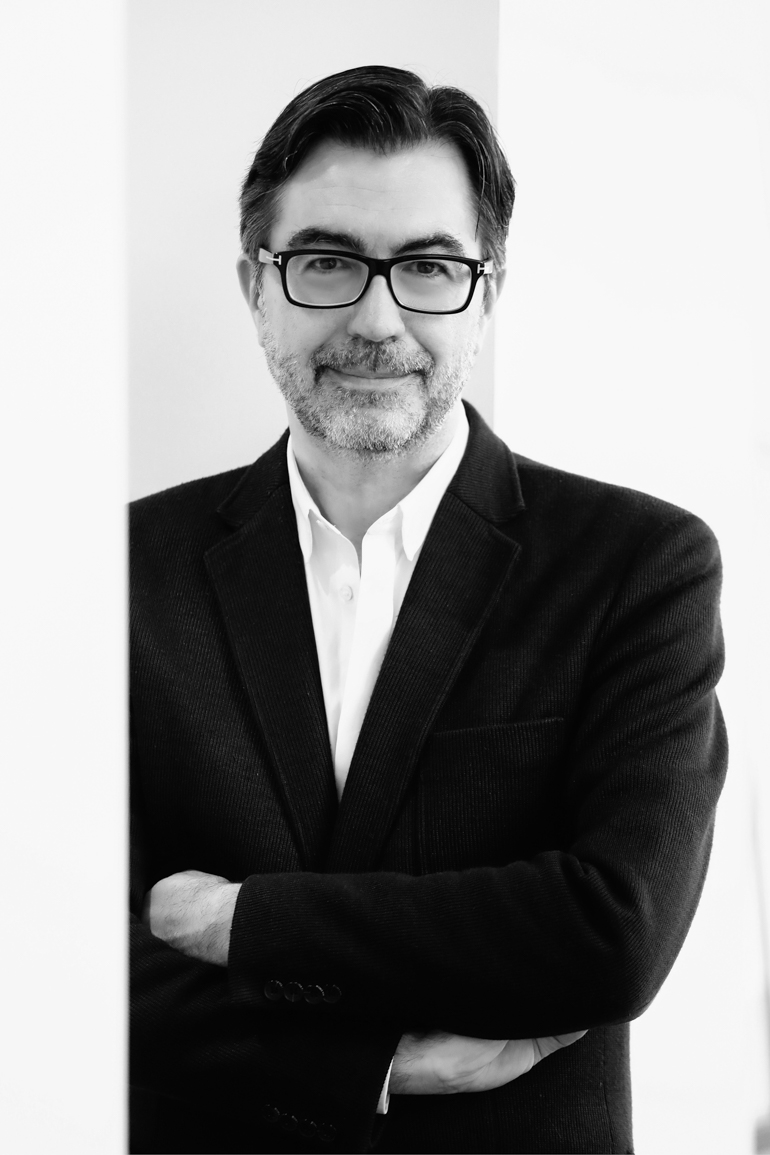 Jean-Gabriel Neukomm, AIA, and founder of New York-based studio JG Neukomm Architecture, is engaged in some mighty large real-estate projects on both coasts. The work is impressive. Equally so is his curriculum vitae. Neukomm is an alumnus of Haverford College (BA in philosophy, magna cum laude, and Phi Beta Kappa) and Princeton University (architecture degree and Master of Architecture program). Early on, he worked for Eisenman Architects and then collaborated with John Pawson, where high-profile clients were Calvin Klein and Ian Shrager. He was an independent practitioner from 1998 to 2003 when he co-founded SPAN Architecture and led projects for such blue-chip names as Tiffany, Pringle of Scotland, The Calvin Klein Collection, Marian Goodman Gallery, and the uber-cool denim line Frame, as well as Fabien Baron for whom he designed a 12,000-square-foot office and West Village townhouse. In 2017, he established JGNA, now with a staff of 20. London born, Neukomm moved to New York at age two, making him a quasi-native. Interior Design sat down with him to talk about placemaking as part of design, the differences beween working in New York and Los Angeles, and what he does during downtime.

Interior Design: Let’s focus first on the residential complexes with developer clients in New York and, for the first time, L.A. How did these contacts come about?

Jean-Gabriel Neukomm: Through long relationships, really. Most of our work is for repeat clients, which reflects well on the studio. We’re good at creating a compelling vision, collaborating, and executing work on time and within budget so we get called back all the time. New projects are similarly the result of word-of-mouth through long-standing clients. For instance, Metropolis came about through a relationship with a friend in the real estate world involved in the initial planning.

ID: Metropolis, in DTLA, is surely one of the city’s largest mixed-use projects. You initiated the $1.5 billion endeavor as principal-in-charge at SPAN and it followed you to JGNA. You are doing the interiors for the three condominium towers, including rooms and public spaces. Briefly, what are the constants among them and what are the differences imparting individuality?

JGN: I was deeply inspired by the Art Deco history of downtown L.A. and used my own photography to create a distinct iconography for each building. The core concept was to develop a relationship to the neighborhood and to root the designs in the area’s architectural DNA, whether signature buildings like the Bradbury or local vernacular like the old cinemas.

ID: Is there an envisioned clientele for all these residential units?

JGN: Downtown L.A. has not been perceived as a residential neighborhood, yet today it has global draw with people relocating from Asia, New York, or the tech companies from the north. The appeal is a dense and walkable city with commutes being addressed by developing transportation systems in advance of the 2028 Olympics. There’s a vibrancy in the local food and art scene hard to find elsewhere in the city. In the long term, Metropolis will certainly be the beneficiary.

ID: While Metropolis is new construction, you’re doing some renovation work in New York, like at The Landon on West 43rd Street. What is the scope of the project, and what is special about it?

JGN: We are the architect for the building’s renovation as well as the interior designer. We saw the evolution of the neighborhood and knew the building needed a personality. A lot of these older buildings were built before the amenity craze and reinforced a feeling of anonymity and isolation in the big city. Our design ties the building together and gives it live and a soul. People want to interact. That’s why design is important as placemaking, appealing to a community, and encouraging connection.

ID: Tell us about some of the differences between working in New York and L.A.

JGN: In terms of overall design culture, it’s easier to tap into New York than in L.A. New York has been very conscious and successful at promoting design as a major export. New Yorkers see design as essential to the urban fabric and a boon to tourism and other industries. And, New York is still seen as a home for makers and manufacturers turning neighborhoods like the Navy Yards and Industry City into successful incubators. In L.A., the parallels are the Arts District, Frogtown, and Koreatown, where creative businesses are growing and are definitely places to watch. On a technical level, the main differences are that building codes and adaptability standards in Los Angeles (and California as a whole) are more strenuous and require more skill and urban care than what we are used to here. It’s not an easy place to build.

ID: Everyone wants to do hospitality. You’ve entered the arena with the Dominick Hotel.  Why should we check in there?

JGN: The 405-key hotel, with a full complement of amenities, will be a premier destination on the western edge of SoHo. Our vision is to make the bar, restaurant, and club attractive as hang-outs to the many creative firms in the area. We will want to connect visitors to the world beyond the hotel’s walls, and will reinforce connection to the art, fashion, and design worlds. As someone who knows and has collaborated with many amazing people from that area, I think it will be an extremely engaging process.

ID: You’ve certainly worked with some movers and shakers, both architects and clients. What were your takeaways from John Pawson, Ian Schrager, Calvin Klein, and Fabien Baron?

JGN: I’d say each is unrelenting in their drive for extraordinary design. You don’t get up from the table until you know you have something great. Each was a significant mentor in his own way. John for his ethos and rigor (and fantastic sense of dry humor), Calvin for his design acumen and perfect taste, and Fabien Baron for his ability to move fluidly from the design of the printed page to objects to the built environment. All are exemplary for their boldness, which also shines through in Shrager’s far-sighted vision for the hospitality field.

ID: What influences you? Where do you get your information?

JGN: Design is everywhere. Since our projects have a strong narrative and cultural basis, the range of influences is wide, encompassing urban histories, literature, and obviously art and photography. For a current project on the Lower East Side, we think that the area’s incredible but over-referenced 19th-century heritage can be enhanced by late-20th-century art movements. The resulting source of inspiration is the area’s mosaic of influences, not one specific element.

JGN: Outside the office, I have to keep up with my two sons, 10 and 12, and my wife who heads Humanities New York. I recently joined the board of the Design Trust for Public Space. I read voraciously, am an avid photographer, and cook. Our family does a lot together, whether it’s travel, museum visits, music. That’s gratifying to me.

ID: What can we look forward to seeing?

JGN: We have more than a dozen large projects on the boards. I want to mention three that speak to the variety of our work. One is renovation of an Upper East Side townhouse, named a landmark. We are replacing the entire internal structure, restoring its historic shell, and working with artists and custom fabricators for the interiors. Another is renovating the 21 buildings at Peter Cooper Village’s 30-acre site. The third is a concept store for Panera Bread outside of Chicago—and adding to our coasts.