The design community mourns the loss of Jim Walrod, who passed away on September 26, 2017. To honor him, here’s an interview we did with him in 2015.

It’s no exaggeration to say Jim Walrod was among the most influential designers of his generation. As co-owner in the 1990’s of vintage furniture nirvana Form and Function in SoHo, he brought mid-century Modernism out of the thrift stores and into the homes of the New York City cognoscenti. As a longtime collaborator with hotelier André Balazs, he had a hand in L.A.’s Standard Downtown hotel as well as Gild Hall and the Sixty LES in Manhattan. He delved into some of the most controversial design pieces of the 20th century in his 2015 show, “Difficult,” at R & Company in New York. Here, he talked with us about what critics get wrong, the state of contemporary architecture, and his own design history. 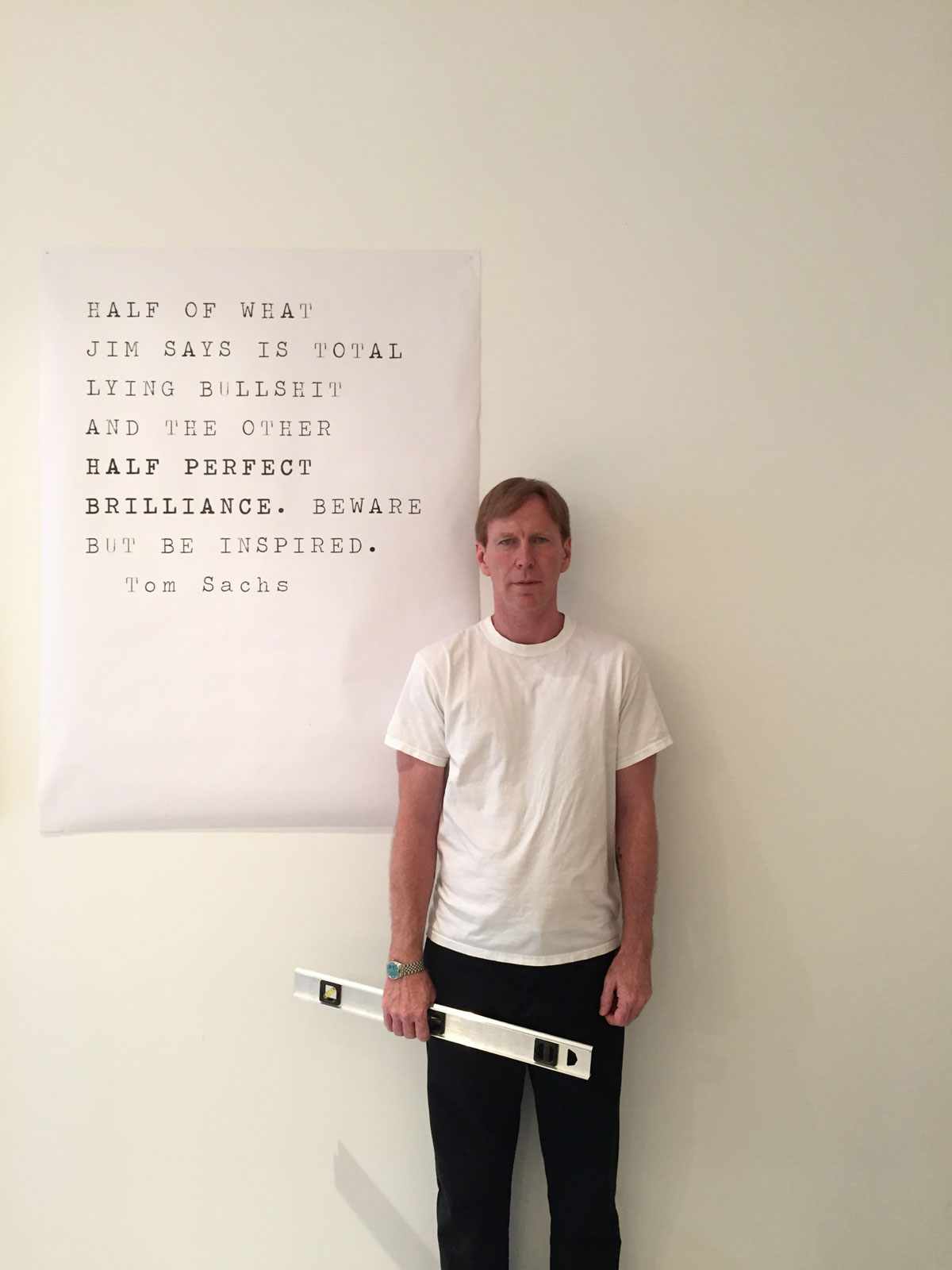 Interior Design: What inspired you to curate Difficult?

Jim Walrod: A few years ago, when I started buying Memphis pieces from people whom I really respected, they kept saying, “What are you doing with this? Just take it, get it out of here!” I couldn’t really understand why someone would have a reaction strong enough to not just say I don’t like it, but to say get rid of it. It made me think something Iggy Pop once said. A writer asked him how it felt to have a hit 20 years after it was it was written. He said, “How do you think it feels to have fucking written it and no one liked it all these years!” So I wanted to show pieces like Memphis style work that’s always mocked. The New York Times damned Memphis, it said, “thank god it’s over! ”

ID: Do you think the dismissal is just about the shock of the new?

JW: Really, it’s funny how generationally these things happen. People reject what’s new. Like, if you’re a 28-year-old woman you might hate what someone like Petra Collins is doing. If you’re younger, you may well really love what she’s doing. And she doesn’t care! It’s incredible when designers and artists work that way. It’s the only way stuff is pushed to the forefront.

ID: Is there a piece from the show you think is particularly ripe for reconsideration?

JW: The Venturi chairs… you know, I still have a problem with them. They’re kind of ugly. Except I found myself at auctions buying them! So I pulled them out and put them in the show. They were among the first things out of the truck and onto the platforms, and one of the interns at the gallery who’s like 27 said, “Those are the most beautiful things I’ve ever seen in my life.” That’s when I knew the show would be successful.

ID: Who do you think is the most misunderstood designer right now?

JW: Gaetano Pesce. When I bring his stuff in, people always say, “What the fuck is that? ” And yet it’s in the collection of every major artist and curator. Jeffrey Deitch’s house is covered in it. Brice Marden collects it. Peter Halley sees the artistic merit. The public doesn’t get it. Same with Patricia Urquiola’s stuff for Moroso —some might consider it ugly, but Moroso is the most adventurous company in the world.

ID: What do you do as an interior designer if a client doesn’t like, or even understand, pieces you choose for them?

JW: One of my most audacious clients is Hester Diamond, Mike D from the Beastie Boys’ mom. When I first met her she had the greatest modern art collection: Mondrian, Brancusi. So I brought two Marcel Wanders for Moroso sofas with these blown-out patterns, deconstructed in every way. I didn’t even know whether I liked them! But she rejected them immediately. The job went on for seven months, and as more avant-garde pieces came into the house, the sofas became more interesting. Education comes as you’re working. I don’t want to inflict my taste on a client; the best thing is when a client says, “Why did we even hire him, it all looks just like us!” They should make the educated choice by the end because you’ve just put choices in front of them. If I choose a Venturi Chippendale chair for them, I owe them an intelligent explanation for why this should go into their house. Clients know they’re going to get that if they hire me.

ID: You’ve said “Time is the only real critic that matters.” As creative director for big-budget hospitality projects, how do you ensure that your work will stand the test of time?

JW: You have to get involved with people who are really educated and responsible. Early on, I began working with Andre Balazs and we’d walk around thrift stores and find things like Vladimir Kagan pieces that at the time might have been seen as kitsch, but read as interior design. That’s why he’s successful—he’s educated and knows what things are, and can introduce them in a certain blue chip way. But a lot of stuff I’ve done, I hope it will become outdated! We first introduced nightlife elements into hospitality, and look what happened when people replicated it without the architectural sensitivity: it became watered down and passé. When the word “boutique” came around, we just laughed. I mean, no one’s ever called The Carlyle a boutique hotel, and there’s just the one!

ID: What is the role of critics, then?

JW: There will always be great critics: people educated toward design and architecture, and people with great voices. Bad critics, too, whom I went after with this show. Most of the people in who wrote damning reviews aren’t the great voices of their generation, but they were heard. And there are a lot more voices to be heard now. Everybody’s a critic, and I don’t necessarily think that’s a good thing sometimes. But with the oversaturation of the internet and mass media, there is the still the possibility to hold onto something other people think is ugly or don’t understand, to pass it around and germinate ideas and become special. You can still have it for awhile before mass culture picks it up and disposes of it again. That’s why I handed the show over to my friends for their comments. I already know why I think things work or don’t. I wanted to activate the design community, to find out why people like stuff.

ID: As someone who’s been so crucial to shaping the style of New York, what do you think is particularly underrated right now?


JW: I don’t think people get the Herzog building [at 40 Bond Street]. Every time I turn that corner, I think, Wow . People hate it, but I love it. Just wait on that gate—you’ll like it more in a couple years. It’s magnificent, and I love the strong reaction. And just down the block [Annabelle] Selldorf is building the same thing in brown! Time will be very good to that building, as it will to the Jean Nouvel on the West Side highway. I was in Jersey City near where I grew up, and one day I turned around and that thing was just glistening in the sun. If I were growing up there now, that’s where I would want to be. Holy shit, how much more successful could you be?

ID: We’ve talked about what’s underrated right now. What do you think is too highly praised right now?

JW: The return of the decorator as personality makes me embarrassed. Who wants somebody’s name stamped on their house? Hiring somebody out of insecurity is totally wrong: we are tools to help a person get to their own point of view. This is a service industry.

ID: As a self-trained designer, how did you establish your own taste and build the confidence to share it?

JW: It came through dealing with clients. My first jobs were in vintage stores, and it was really easy to live in a bubble that way. I mean, the first store I owned, a guy from C+C Music Factory walked in and asked if my stuff was kids furniture, or office furniture? And it was the best experimental 1970s furniture you could imagine. I thought I’d never make a dollar. But I was lucky enough to be in a place and time where I got encouragement by people who became tastemakers. I didn’t know how to read a floor plan, but I got invited to the game. I got my education through them. When I was a kid, my mom suggested I become a hair cutter because you can take it anywhere and apply it. Design is kind of like that. In high school I was told you can’t make a living that way, but I thought well, someone designed this desk and got paid for it. Someone designed this glass and got paid for it. I’m not employable any other way.