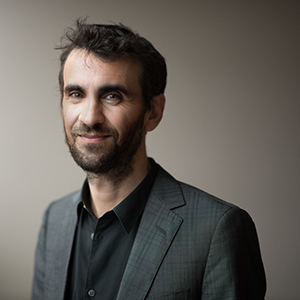 Italy’s first design museum just made its debut—and it’s about time. Launched during Salone del Mobile last month and located on the ground floor of the La Triennale di Milano, the Triennale Museo del Design Italiano has a permanent collection of 1,600 pieces. To mark the opening, architect Joseph Grima, the director of the new museum, curated its first permanent exhibition, “Museo del Design Italiano—Part I: 1946-1981.”

Before he took on this new role, Grima served as editor-in-chief of Domus magazine and director of New York-based art and architecture organization Storefront for Art and Architecture. Currently, he is also creative director at the Design Academy Eindhoven, an illustrious position that has him jetting off to the Netherlands one week each month. While born in the United Kingdom, Grima has lived most of his life in Italy, where he moved with his family at the age of 10. He now resides in Milan in an apartment carved out of a former factory workshop—a historic building he renovated, which also houses the design research studio he co-founded, Space Caviar.

Interior Design sat down with Grima to learn more about the new museum and the exhibition, what makes one of the oldest pieces selected stand out, and the ideal late-night hangout during Salone del Mobile.

Interior Design: Why do you think it took so long for Italy to get a design museum?

Joseph Grima: The process was likely more difficult and daunting precisely because Italy is so central to the history of design. In telling one’s own story—something I was keen to do in as simple a form as possible—it can be difficult to achieve a critical distance. Many of the exhibitions organized on a temporary basis in previous alterations of the Triennale Museo del Design Italiano ended up investigating quite specific angles and aspects of the history of Italian design, which may or may not have resonated with a broad audience. In Italy, the general culture of design is so extensive and so detailed that the idea of simply exhibiting the classics is almost controversial. As if, we know this already—we want to see something new. However, focusing on the new is what the rest of the Triennale does.

ID: How did you select the products in the permanent exhibition?

JG: The permanent exhibition is based on the Triennale’s permanent collection, which has about 1,600 pieces in it. The idea was to translate a selection of objects from the permanent collection into a timeline that tells the story of Italy. The objects in the exhibition are produced from the late 1940s onwards, so the post-war era. The exhibition ends with the emergence of post-modernism and the Memphis Group—the design and architecture group founded by Ettore Sottsass in 1980—as a new phenomenon. Walking through time, you can see how the idea of furniture itself evolved and how different materials and concepts emerged. That’s all in a very long linear space—one of the most beautiful spaces in the Triennale.

Our hope is that we are able to both expand the square footage dedicated to displaying the permanent collection and the collection itself—continuing with acquisitions that fill in any gaps.

ID: Could you name a notable item among the oldest pieces in the permanent exhibition?

JG: The Visetta sewing machine (1949) by Giò Ponti for Visa is to me emblematic of Italian design in general. What made historic Italian design great is that it’s a form of design that really touched people’s lives. It wasn’t applied simply to luxury objects, it was a form of democratization of access to beauty. The fact that Ponti was designing very utilitarian objects is a great example of what makes Italian design unique.

ID: What about one of the newer pieces?

JG: The exhibition ends with the Casablanca cabinet (1981) by Ettore Sottsass for the Memphis Group, which may be the most iconic piece of the Memphis collection. Ending with Ettore Sottsas, one of the great figures, was an intentional, highly symbolic choice. In 1982—the year that Memphis really took off—begins a chapter of Italian design now getting a lot of visibility. At this turning point, Italian design became much more internationalized.

JG: Also at Salone del Mobile this past April, Space Caviar participated “Far,” an installation at Nilufar Depot, one of the most interesting design galleries in Milan. With bubbles attached to the structure of the gallery itself, we created a setting to display work from a group exhibition consisting of 10 young designers. The surprising sonography—people could enter and pressurize the bubbles—was a tribute to the radical architecture of the 1960s and 1970s, a genre I am very interested in.

JG: I’m working on a project in Portugal that’s still a little bit in stealth mode. It’s a kind of research center in a very remote part of Portugal—the Azores islands, in the middle of the ocean between the U.S. and Europe. I am looking at producing one’s own materials and then building with those materials. The idea is that this will become an annual event—something between a residency and workshop—where we can really examine the possibilities of returning to the most primitive form of architecture possible. I hope to launch it in 2020.

ID: Could you name a piece of furniture in your home that has particular value to you?

JG: I recently got a Margherita chair by Franco Albini, one of his real masterpieces, and actually also in the Triennale’s collection. It is one of those wicker chairs that was produced by Vittorio Bonacina, the manufacturer now called Bonacina 1889 that Giò Ponti and a lot of other great designers worked for. This chair is incredibly difficult to find at a reasonable price, but I was very lucky…late night trolling on eBay. Like Ponti‘s sewing machine, it is something really made for daily use, not made to be collected. That’s so different from the collectible design scene nowadays.

ID: How do you think your childhood influences your design thinking?

JG: From the age of 10, I lived in a very remote part of Italy, on a farm which at various points didn’t have electricity. My parents were very interested in the idea of going back to the most radical form of self-sufficiency. On the one hand, that gave me additional appreciation for beautiful things because you can’t take anything for granted. On the other hand, I came to admire design that isn’t just based on complexity but also simplicity. I gained a lasting interest in being off-grid, and my project in Portugal is about investigating the new attraction to off-grid living.

JG: One hero is definitely David Byrne. Like him, I am really interested in crossing disciplines and working in different fields that feed off each other. Beyond his music, and his role as founding member of the Talking Heads, which is what he’s most known for, Byrne’s film “True Stories” (1986) is interesting for its urban analysis of 20th-century sprawl. I also admire his work as a theorist—focusing on loosening copyright issues.

ID: Since you are a Milan insider, where should we go next Salone del Mobile?

JG: There’s a place called Johann Sebastian Bar in semi-suburban Milan, and it’s the coolest bar in town. It’s run by this elderly couple, in their late 70s or early 80s, who party on at the karaoke machine until two, three, four o’clock in the morning on a regular basis. Not to mention, the bar has the best name ever.