has made an art of bringing new ideas and innovation to the widest-possible audience. A recipient of hundreds of international awards and creator of thousands of paradigm-shifting designs, Rashid lectures extensively, creates interiors for a wide range of hospitality venues and residences, and designs for a host of furniture brands and product lines (

being just a handful). Thoughtful and whip-smart, Rashid offers a personal glimpse into his career and muses about our collective direction. 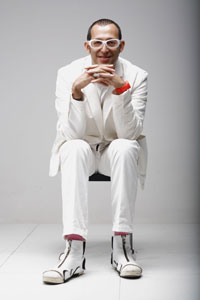 Karim Rashid: At the beginning of my career, I thought the greatest accolade was to be in a permanent collection at a museum. I’ve come to understand that much bigger than that is to walk into someone’s home and see products that I’ve designed. Everyone, collectively, wants good design.

The notion of design being a “high art” has always felt ridiculous to me. I’ve spent my career trying not to fall into that trap. Early on, companies interested in me were small. They charged more so that they could afford the tooling and the crafting by hand. That’s just what it took to make it. I started to think,

The designer humanizes our physical and virtual world. Fortunately, things have changed a lot since then. Companies now recognize that design is what differentiates. It’s critical, and demanded.


ID: Your product collaborations have really made an impression on consumer culture. “Siliconezone by Karim” has won the 2012 Good Design Award USA and 2012 Reddot Design Award Germany. Why do you think they’re so well received?

KR: Siliconezone has been a satisfying collaboration because I am able to think about using silicone—which is heat-resistant and hygienic—in a functional way. As a polymer, silicone is expensive. My question was, “How can silicone play a role in your kitchen?” The industry has spent so much energy making kitchens more reductive and minimal, and we tend to want to hide our kitchen products. I thought a little bit about their context. When a product is not being used, it has to have some contemporary beauty and presence. Yet, when things are beautiful, consumers become skeptical. It’s the same with people. When a woman is beautiful, the cliché is that she’s not smart. That’s ridiculous.

Design really shot itself in the foot in the late 70’s and 80’s. Design was beautiful and idiosyncratic, but it didn’t work. We lost a huge market of people who got cynical. I define beauty as something for which the inner and outer are in sync. The impetus with Siliconezone, as it is with all the democratic things I design, is: Make sure they work.


ID: In addition to Siliconezone, you’ve designed iconic goods, lighting, furniture, and packaging for companies such as Alessi, Method, Umbra, Artemide, Samsung, Bonaldo, and Christofle. What is the discourse like when trying to do something interesting on a bigger, more approachable scale?

KR: It can be among the hardest things to do in this field, working with a large company that can really make affordable goods. It’s hard to push through a really interesting and great product. When I see a great product from a big company I think,

I did a cone-shaped vacuum for Dirt Devil—an enormous company with factories all over China. Frankly I was really impressed with myself that I managed to get that cone into people’s homes. It would just sit out on people’s coffee tables. People loved that thing. Doing something that changes the archetype is really quite a challenge, and doesn’t happen often. I would love to see it happen more often.

ID: You’ve managed to make your presence known throughout all these various mediums. Is it a natural extension of your personality?

KR: Oh yes. I’ve always had a perpetual desire to work. When going to university, I was torn. I thought,

Do I do fashion design, fine art, or architecture?

I’ve always loved pluralists like Le Corbusier and Shevchenko. They just went for it. I know many designers who are known for one thing, but will say to me, “I’d love to do a chair.” I say, “Do a chair!” You don’t need a client… Just do the chair. It’s the difference being driven as an artist and being driven as a designer.


ID: You’re always very busy, but what would you say are some of the most engaging projects on your plate from the interiors side of things?

KR: I’m working on a lot of condominiums in the world—in Russia, Latvia, Miami, Toronto, and New York. Some of them are really democratic and inexpensive. I’m trying to do accessible things that will bring great experiences to an average income. The work in Latvia is for lower income, which I love doing. I’m also doing a hotel in Tel Aviv and one in Hamburg. There’s a dentist office in Canada, a plastic surgery clinic in Korea… And, oh yes, also a 600-room hotel in Bangkok.


ID: And how about on the industrial side of things?

KR: I’m involved with a lot of packaging, which I love doing. Then there’s branding, which involves a lot of graphic work. I’m working on a new wallpaper line and a new line of carpets. I’m really enjoy working on surface materials because even though there are all of these amazing materials, there’s still a tendency for banal things to be used. A wood floor is not really a great floor.

I come from industrial design, but when I got into interiors I tried to take the same approach. In one of my condominiums, all the floors are rubber in the bathroom. Think about it: You’re naked in the bathroom, and it’s in the hardest part of the house. For many years I’ve tried to make a rubber bathtub and sink, but so much is based on archetype.

KR: I’m pretty busy but I know how to take it easy. I’m very relaxed, because I’m confident about what I do. I’ve learned a lot of lessons through the years, and only work with people who really want to work with me. Designers tend to be suckers, in that we see potential in everything. Now, I keep my ears open beyond the design work and understand the culture of a company.


ID: There are obviously philosophical correlations between object design and architecture and interiors, yet the day-to-day is so different. How do you switch gears?

KR: Some people like routine, and it’s a natural part of human nature. But I love thinking, Maybe today I can work on an art show, a hotel, or music. It’s all part of our ongoing, seamless, continual world. It would be great to take fifty-percent of the stuff out of the world. The pen is an extension of the hand, of the pocket.

I was giving a lecture in Korea, and on stage it occurred to me: What I don’t like about the past and what I love about the present is that one-hundred-thousand years of human existence were analog. Thirty years have been digital. We are pioneers. We think we’ve done everything already—but it’s just the beginning. The analog world was static, and all about permanency. Architects thought about building monuments. Digital is ethereal, light, and disposable. It’s antithetical to that and I see that as a means of empowering the individual. The past was about the collective. Now we’re all being individuals.


ID: Exciting as that is to some, there are many who find the new tech world off-putting. What would you say to them?

KR: It’s overwhelming, but fascinating! Whether you consider it good or bad, it’s completely different. I’m an idealist. It’s part of how we’re evolving. You and I are so much more knowledgeable. How naïve and myopic we were as humans at one time. I remember Marshall McLuhan and socialogists talking about the computer dehumanizing us. It’s actually done the opposite. We’re more human than ever. We’ve never been so aware of other human beings.


ID: As a designer of things and meditator on physical surroundings, how does this affect your work?

KR: It’s part of my job to recognize that notions of luxury, which used to be about marble and diamonds, have changed. Luxury is now about free time and having less. It’s about traveling with no luggage and having the most comfortable seat. I think the master plan—why we are moving to the ethereal and why we’re so connected—is in order for the world to survive. The more immaterial we are, the more the earth can exist. The analog gave us too much stuff. With all these technologies, we’re finding a way for the world to evolve and progress and continue to exist.

It’s a good way to think about what your contribution is. I speak at a lot of symposiums, and I’m shocked by the agenda and pedagogy being taught in schools. What are you really trying to do—make a really beautiful space or just using material for the sake of material? Is the revivalist baroque trend of the past fifty years relevant to the time in which I live? We can light space with no fixtures now. Why a chandelier? We’re moving in new directions, and it’s not about “stuff.”