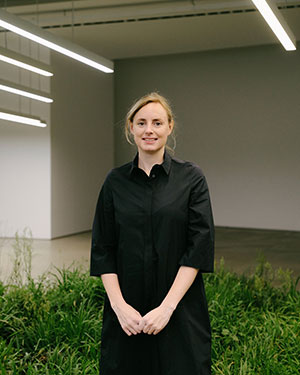 Whether it’s sprouting everything she can from Whole Foods Market’s bulk foods section or setting trained sheep free in a gallery, Linda Tegg is known for her surprises. The Australian artist, who lives in a Victorian worker’s cottage in Melbourne with her husband, designer David Fox, is infinitely curious about the way humans interact with nature and the world—something she continuously explores through installations, performances, photographs, and video.

Most recently, in time for Salone del Mobile in Milan this past April, Tegg collaborated with Jil Sander creative directors Lucie and Luke Meier for “Adjacent Field,” filling a room at the Jil Sander headquarters with “spontaneous plants”—or what most people would consider weeds. Five large-scale photographs of the plants, taken by Fox who is also her collaborator, were then displayed on the windows of the Jil Sander flagship store.

Interior Design sat down with Tegg to learn more about the installation, how a curious involvement in search and rescue in the Australian bush influenced her outlook on the world, and what 500-year-old watercolor painting comes to mind when ever she sees a sublimely rich section of earth.

Interior Design: Could you tells us a bit about “Adjacent Field?”

Linda Tegg: I took initial inspiration from former industrial sites, places plants had started to reclaim. All the plants in the installation were sourced from abandoned fields on the outskirts of Milan. So it’s quite diverse, a fern here, an edible plant there. There’s clover, thistle, stinging nettle, very common grasses, dandelion, and maybe even wild strawberries.

ID: How did you keep the plants so lush and green?

LT: Nicholas Burnham, a lighting designer I work with in Melbourne, did the lighting. He’s done quite a bit of research into what the plants need in terms of spectrums—which you can sort of see, alternating from warm to cool light. The idea was to lean into the parts of the spectrum that plants need for their photosynthesis.

ID: What gave you the idea for this project?

LT: I often dive deep into things that I don’t know very much about. For “Adjacent Field,” I was really interested in thinking about plants that are very common in and around Milan—the sort of plants you become quite blind to—and placing them in the spotlight. These are the plants we overlook, the plants that are quite autonomous. They kind of pop up despite all the surfaces we put down in the city to suppress their life. They are there anyway, living amongst us.

LT: At the architecture edition of the La Biennale di Venezia last year I presented “Repair,” an installation with Mauro Baracco and Louise Wright of Baracco+Wright Architects. We took native Victorian grassland from Australia’s western planes that could grow in Sanremo, Italy and installed them in the Australian pavilion. I also did an extension of that project this year, at La Triennale di Milan.

LT: Actually, I’m currently trying to repatriate the seeds from “Repair” from Italy to Australia. It’s an ironic position—I’m trying to earn import and sow permission for officially listed Australian indigenous grasses! A lot of them haven’t been imported to Australia before because they are from there. The whole process is taking ages. Another exciting aspect of “Adjacent Field” is that Jil Sander will keep most of the plants here in an ongoing installation that will coexist alongside all operations and creativity—that’s going to prompt a lot of considerations about coexistence. The installation is portable to some degree, so it can be reconfigured in numerable ways and moved from one room to another. So we will have all this movement that we don’t normally associate with plants. Therefore, I’m going to develop a performance score or a set of constraints that the installation has to operate within in order to maintain. It will be always shifting, always changing.

ID: How did your childhood influence how you think as an artist?

LT: My father was involved with search and rescue in Australia, rescuing people who had been lost in the Australian bush and also training people to do this. Some of this training was in and around creating scenarios where everyone deferred reality. Since I was a child, I would be cast as an unconscious person— perhaps reclined in a tree stump, feigning unconsciousness. In these enactments, there was a reality and another agreed-upon reality underneath. Today, a lot of my work explores the processes of conditioning, whether it’s human behavior or how we condition the world around us to concur with what we think is natural. I’m really interested in troubling, or interrogating how we come to our ideas about what is ‘natural.’

ID: You’ve been known to bring live animals into galleries and museums.

LT: When I first started working with animals, I was focused on those that had been trained for the film and television industry. I was fascinated about the fact that they had been highly conditioned to enact our idea of their natural behavior for the camera. To me that embodies a lot of these ideas about reality as a kind of performance. I brought a horse, an Andalusian mare, into the Alliance Française Melbourne, a herd of goats into the Centre d’art, Neuchâtel in Switzerland, a petting zoo into Sullivan Galleries in Chicago, and a couple of gorgeous sheep that had been cast in ‘Charlotte’s Web’ into the Victorian College of the Arts in Melbourne. I have one image of the Andalusian mare in my home, a photograph of her when she’s in her paddock. It’s a quite traditional equestrian portrait, but she’s looking away as if she denies our gaze. I like living with that.

ID: Can you name someone who inspires you?

LT: Actually, I have a work in particular I’ve always loved, a watercolor painting by German artist Albrecht Dürer called “The Great Piece of Turf.” It is an interesting way to look at an overlooked piece of ground, and comes constantly to mind when I come across a section of field and think, ‘Oh, this is so rich and complex.’

LT: I’m reading ‘Robert Smithson: Time Crystals’ an exhibition catalog presented by the Monash University Museum of Modern Art. It’s from an exhibition dedicated to the work of American artist Robert Smithson, who is known for his land art. I’m interested in his ideas of time as he has a different conception of it and uses geology.

LT: The wonderful thing about plant inspiration is that it comes back and surprises you. Just walking through, I think, I didn’t even see that yesterday, it’s just changed!