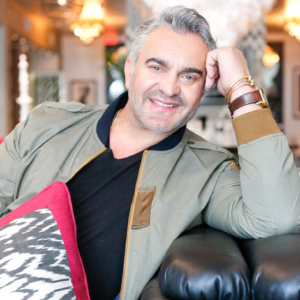 Bullard began his career early. At 12, he started buying decorative objects, “oddments” he called them, and sold them in a stall rented by his father at the Greenwich Antiques Market, London. He developed a coterie of collectors including a Ralph Lauren buyer. By 17, the acting bug bit. Enter studies at the Lee Strasberg Actors Studio in Covent Garden leading to a predictable arc: the move to Los Angeles.  He snagged a role in the film I Woke Up Early The Day I Died. On-set connections led to design commissions. He’s always worked independently. Currently, he maintains a 4,000-square-foot West Hollywood studio for 24 architects and designers above the shop, i.e. a street-front boutique showcasing his eponymous collection. Homes are in the Hollywood Hills and Palm Springs.

Interior Design: What is the most valuable lesson you’ve learned in your multi-faceted career?

Martyn Lawrence Bullard: Get a good accountant to deal with the business side and allow you to concentrate on the creative. Check the books once a week to understand your finances, overheads, and goals.

ID: How did your acting experience influence your design career?

MLB: My theatrical side has helped in presenting projects and expressing passion for a design or scheme. I have learned to express the drama and explain the glamour of a room whilst maintaining the client’s vision and personal needs.

ID: Speaking of glamour, your style is described as Hollywood glamour. What’s that about?

MLB: It means we have captured the essence of fantasies and created personal sanctuaries that blend luxury and comfort in the most visible and modern way.

ID: How did growing up in London influence your work?

MLB: As capital of a once-great empire, London has abundant decorative influences. They’ve taught me it’s all in the mix, blending periods, culture, and scale.

ID: What are a few recent projects/products?

ID: Tell us about another recent project, the Hotel Californian in Santa Barbara.

MLB: It is a blend of old-school Santa Barbara with its classical Spanish colonial architecture and a burst of modern energy that has swept the city. Fresh and bold colors punctuate the monochromatic background of the Alhambra-esque palace, which is made exciting with custom artworks, mid-century furniture, exceptional lighting, and exotic accessories. Layers, textures, and tactile finishes make the hotel a breath of fresh air.

MLB: Wallpaper, especially when applied to the ceiling.

MLB: Diana Ross’s beach house, which I hope to get once she finds her dream one. Then she could sing at my house.