When most people see an abandoned building or a piece of timeworn furniture, they keep on walking. But architect

finds inspiration anywhere with an intriguing past. Even his apartment, which is housed inside the historic Brooklyn Eagle Warehouse & Storage Company in Brooklyn, New York, was once a derelict structure that sat vacant for years. Yet he saw beyond the peeling walls and the developer’s sheetrock and purchased the former warehouse’s penthouse, a loft-like space with a giant clock face that is also a window. Now, the clock is the focal point of his living room, furnished with antiques and salvaged goods he’s sourced from around the world.


Here, Davis discusses architectural history, how literature influences his work, and tips on where to buy the best salvage decor.

Interior Design: Using salvaged materials and reimagining architectural details have become your trademark. What is it about historic buildings and objects that intrigues you?


Michael Davis: Every generation, every age, and every culture believes that it can distinguish itself from the past by creating a new vocabulary. In the ancient world this was very often done with bits and pieces of old buildings that were called “spolia.” When a conquering power took over a neighbor, it would take pieces away and use them in new buildings. This history interests me and in my own life it’s a way to stay connected to my own personal and architectural history.

ID: Do you have any favorite places to find salvaged goods that you can share?


MD: I have many. I have an antique and architectural salvage shop of my own [called

] in Hudson, New York, and we source things from all over the world. Here in the U.S. I have many sources, a couple of the local ones I like are

in New York and Connecticut, and 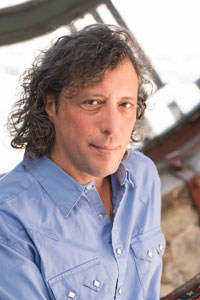 ID: Do you have advice for anyone who wants to emulate your design aesthetic in their own work?


MD: I think my aesthetic is about unselfconscious design. I like to bring things together that I love regardless of whether they harmonize in a classical or design way. I don’t think things should be too closely matched or too carefully curated. If something is meaningful to you because it represents a wonderful experience you had when you found it, then it will be beautiful in your home and it won’t matter if it doesn’t fit perfectly in just the right way. Do what you love and bring what you love together. Don’t be shy about color and look below the surface of things, look to the present in objects and you’ll find yourself.

ID: You were born and raised in New York, how does the city inspire your work?


MD: The truth is that I was raised in three cities that were all very different: New York, Los Angeles, and London. All of them tend to influence my work, but New York specifically is interesting to me because I’ve seen it change so dramatically from when I was a child. I find that my nostalgia for the New York that I grew up in informs the work that I do now. New York was once a very warm residential place, which is less the case now and is why I gravitate to Brooklyn. [When I bought my apartment in Brooklyn 25 years ago], it felt much more like the Manhattan I grew up in because it was unpopular and unchic, so it wasn’t subjected to the same forces of development and transformation that Manhattan went through. It’s going through it now, it’s suddenly very chic and where everyone wants to be, but I like the fact that it’s sort of been left alone a little bit.

ID: What gave you the idea to open 3FortySeven, your gallery in Hudson, New York?


MD: Like so many other things in my life, it was kind of a happy accident. I began to live in Hudson long before it was chic and popular and I would wander around and think,

Where is everybody? This place is so great and it’s close to New York City, sooner or later it has to become a destination.

So [about 10 years ago] I bought the worst looking property with the best location on Warren Street, an art-deco gas station on a big lot set back from the sidewalk. At the time I didn’t think that the economy and real-estate market were booming and then the recession hit, I had tenants but eventually I was tired of being a landlord. So I decided since I have this building, I should fix it up and do something more personal and creative with it.

ID: In the past you’ve said that physical structures can influence a person’s life. Can you explain this idea further?


MD: We spend an overwhelming amount of our time inside buildings and how warm and inviting they are can influence one’s mood. Small children and infants are affected by color and pattern and shape, that’s why we hang mobiles above cribs and paint their rooms blue and pink, to stimulate their minds. If we were sitting in a cold, white box with a bare cement floor, we’d probably be having a completely different conversation right now.

ID: How do you approach collaborations with clients that are household names like actor Zach Braff and chef Zak Pelaccio?


MD: Every client is completely unique. The most important part of the process early on is getting to know them, what their life is like and what their visions are. What was wonderful about both of them, like many of my clients, is that they were very involved and very collaborative and gave all the time and energy into their projects.

ID: What is the typical creative process like for you when you’ve first seen a space?


MD: I try to focus on what I feel rather than what I see. In other words, I find that my eyes play tricks on me, so I often will close my eyes in a space. I want to hear what it sounds like and feel the space around me.

ID: Do you recall some of your earliest design memories growing up?


MD: I was an avid reader and film watcher as a small child and it was through literature and secondarily through film and theater that I first became interested in architecture. I found that any book I was reading, if there was a particularly vivid description of a place or a space, that I was drawn to it and that was how I first began to understand architecture. [Alfred Hitchcock’s film]

Remembrance of Things Past

ID: What are some of the most exciting projects on the horizon for you?


MD: Right now we have the usual mix of houses and lofts. We started working on a project several years ago that’s on hiatus while funds are being raised. We’re designing a town square in a small town in Norway called Vanse. It has a very close relationship to Brooklyn because it provided an enormous amount of carpenters who came to America and New York City to do construction during the turn of the 20th century and they all lived in Brooklyn. When they returned to Norway, they brought with them pieces of American tradition like cars, music, and architecture. And so it’s a very curious little town. The town square is called “Brooklyn Square” and they’ve asked me to redesign it in a way that would be redolent of Brooklyn.