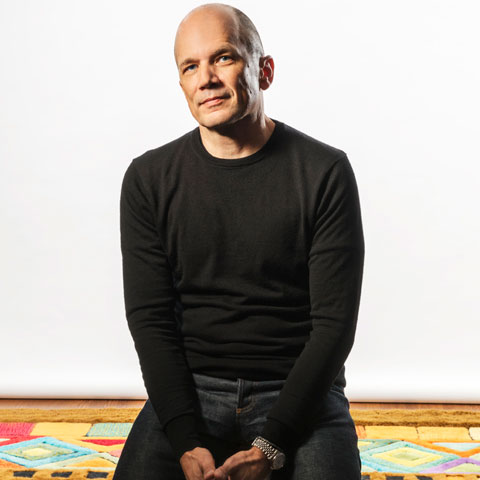 He grew up on Long Island, but Michael Maltzan has made his mark in Los Angeles. After attaining undergraduate and graduate architecture degrees at RISD and Harvard, respectively, he headed cross-country to the city of angels, eventually founding his namesake firm there in 1995. He soon built up a portfolio spanning projects in the residential, commercial, cultural, and urban-planning sectors, for the well-heeled and those in need, from the Billy Wilder Theater to the Star Apartments for the long-term homeless. New Yorkers will know Maltzan for MoMA QNS, which served as the museum’s home in Long Island City during construction of the Manhattan site. He’s just completed the Moody Center for the Arts in Houston and, back in his adopted hometown, the city eagerly awaits his Sixth Street Viaduct. He tells us more.

Michael Maltzan: I grew up in Levittown, a typical post-war New York suburb on Long Island. Many people see great monotony there, but for me, especially as a child, there were nuanced and profound differences, simply between street and backyard or how landscape defined both the consistency and diversity of neighborhoods. In this way, it developed my understanding of context and the importance of a place’s characteristics, even if they’re more ephemeral or subtle.

MM: My wife, Amy, and I came to L.A. in the late ’80’s, after I finished graduate school, because it seemed to us that it was at an exciting moment as a city and as a creative culture. It had a sense of openness and possibility and was an extraordinarily supportive place to try to make things. That is still true even as the city and state continue to change, develop, and inevitably get more complex.

ID: Congratulations on the Moody Center! Tell us about the project.

MM: There’s a similar sense of openness about architecture in Texas and an extremely diverse and inquisitive arts culture in Houston. The Moody Center is one of the first buildings we’ve made in brick—we were looking to use a material that referenced and related to Rice University’s campus, which is made up almost entirely of traditional brick buildings. But we were also looking to express a strong sense of the contemporary, since it’s meant to be a new kind of center, one that is interdisciplinary and expands the culture of arts and ideas at the school. The brick we used, a dark-gray magnesium-oxide brick, seems to shift color over the course of the day depending on the time, light, and reflections from the surrounding context. So the building is, at once, solid as well as dynamic and changing.

MM: For each project, it begins by developing site models and taking a deep dive into the quantitative program. We spend real time with the client or the community developing the project, trying to draw out as much qualitative information as we can. But while that’s the way we begin developing information and tools for the project, its actual spark or initial inspiration often comes from an unexpected place. Sometimes it’s a clue from the site or something someone said. I’m always looking for the thing that captures the spirit of the project. When it appears, and it always does, that’s when the project truly gains its momentum.

ID: The Sixth Street Viaduct is an exciting project. What aspects are you particularly jazzed about?

MM: In terms of scale, it’s certainly one of the largest projects we’ve worked on, and a type of project that architects don’t often get to do. It’s an infrastructural and engineering project first and foremost, replacing the previous viaduct that gets cars from one side of the city to the other. But the really exciting thing is that it has the possibility to demonstrate that infrastructure can and should have a greater role in our cities. It will have bicycle and pedestrian connections, parks, Los Angeles River development as well as access to the river itself, and a range of community programs connected to and intertwined with the bridge. It has the potential to weave into the life of the city and its communities in a deeper way.

MM: Knowing what I do, most people think I live in a spaceship. But we actually live in a very traditional house built in 1924. It sits on the edge of the Arroyo Seco, an extraordinary piece of the larger L.A. landscape and history. That connection to a semi-wild landscape is what drew us to it.

ID: What is a favorite item in it?

MM: Probably the two carpets our friend Petra Blaisse designed, which were prototypes for the Seattle Public Library. They’re like large photos of landscape, of garden, so they constantly remind us of the connection between inside and out.

ID: What app do you first check in the morning?

MM: I’m a cyclist, so I’m semi-addicted to Strava. I can see what my cyclist friends have done over the last day or two. I guess that’s part of my competitive side, but it’s a persistent motivation to get out there.

MM: I do everything I can, whenever I can, to be in Rome to see Francesco Borromini’s San Carlo alle Quattro Fontane. That building, and especially that interior—and not just the chapel itself, but the adjacent courtyard as well—are two spaces that are extremely meaningful to me.

MM: An airport. Probably because I spend so much time in them. But I can’t help but dream about what one could do to make that experience better, more inspiring, something you look forward to.