Before becoming an architect, Mexico City-native Michel Rojkind toured the world as the drummer in a rock band called Aleks Syntek y La Gente Normal. After a decade on the road, he began studying architecture and urban planning at the Universidad Iberoamericana, and eventually traded in his drumsticks for a drafting table and an architect’s triangle. In 2002, he founded


and in the years since he’s been a leader in changing the landscape of the oldest capital city in the Americas. In 2010, the Mexican Civil Registry named him one of the “Country’s Treasured Architects.” He’s received numerous awards, including the International Architecture Award (2008) for designing the


in Toluca, Mexico, which resembles an opened chocolate bar wrapper. His most recent project, revamping


, a movie theater complex and home of the country’s national archives, has received numerous praise from media outlets, critics, and fellow architects alike.


Here, Rojkind discusses Mexico City architecture and design, the economics of sustainability, and how his time as a rockstar prepared him for a career in architecture. 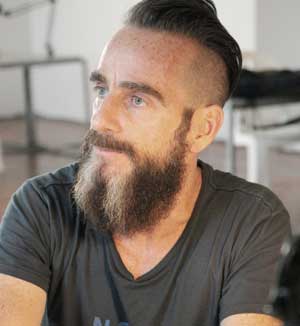 Interior Design: Your firm Rojkind Arquitectos has been one of the leaders in transforming Mexico City’s architectural landscape. In your mind, how has the city changed since you founded your firm 13 years ago?


Michel Rojkind: We’ve picked up where government and city planning has failed. Even though Mexico City keeps sprawling, there is a return to densifying the city center and other areas. What used to provide change with big ideas is now seeing more tactical acupunctural solutions to public transportation, city bikes, social outdoor life, etc. Pushed by private investors and local initiatives, the city has grown and adapted, and we’re seeing a vibrant creative community of young, contemporary architects.

ID: What’s one thing about Mexico City architecture and design that people may not realize?


MR: Mexico City is defined by an extraordinary condition in which the rules of behavior are not set nor do they have a strong agenda made clear through a formal communication strategy. The way things happen is always unexpected and one has to be willing to respond every day to any number of surprising inquiries. Mexico is very chaotic and we see chaos as opportunities. Here we are ingenious by necessity because of a lack of system.

ID: Can you touch on what it was like renovating Cineteca Nacional, home of Mexico’s national film archives?


MR: We started by adding four new theaters and building more film archive vaults, but as with most of our projects, [we wanted to] add value and give back to the community. The first thing was reclaiming the complete site and making people aware of an existing space that could be occupied by people instead of cars. We replaced the [parking lot] with a parking structure and [transformed the lot into] a public green space with an outdoor cinema. We also connected the two main accesses with a covered rooftop that provides areas for concerts and performances. People are occupying the space in ways that are great to experience, such as concerts, readings, peaceful protests, gatherings, etc. The project is alive and full of life.

ID: What were some of the challenges you faced when it came to ensuring that the building’s original structure worked with the update?


MR: Understanding the importance of the original Cineteca Nacional designed by Manuel Rocha [in 1984], it was very important to extend its social gathering areas and maximize that experience. We had a great opportunity to access a place like this and move around through an exterior garden and covered spaces. The new theaters are built in a prefabricated concrete exterior finish that relates to the harder texture of the original [buildings]. The white perforated roof connects both the original and new buildings and provides shade.

ID: What are some design trends that you’re seeing in Mexico City right now?


MR: There are many conversations of how technology can inform traditional crafts, and how digital design and local fabrication can [work together] and learn from each other.

ID: What’s the first thing you do when you begin a new project?


MR: I create a design strategy to reprogram the [existing] program and see how we can enhance the results. Even though one client is paying for a project, [the final result] serves many more. We try to expand the social outcome and reconnect to the city as much as possible.

ID: Where do you go to seek inspiration?


MR: [I seek inspiration] from everyday life. By observing social patterns and behaviors of the quotidian, it gives me a glimpse of how a building will be occupied. I try to have conversations with many sociologists, economists, entrepreneurs, etc. to understand a broader spectrum of the outcome in design.

ID: I understand that you used to be a drummer in a band. What are some of the skills you used as a musician that translate into your work as an architect?


MR: Music has a large influence on my entire life, but shifting my brain from music to architecture was always very nourishing, since I could see problems through a different perspective. But the best influence on architecture was while touring with my band through Central and South America, the United States, and Europe, where I could compare cities, policies, infrastructures, public space, and architecture, but most importantly how people behaved around them. Being able to witness social changes when returning to a city was always something that drove me to think, What could architecture do besides solving a client’s [problem]?


Another great influence from music was the will to collaborate with talented people and understand that by bringing together beautiful minds, the results could only get better.


Musicians tend to jam with other musicians just because they want to play. We have always pushed for this approach in design as well.

ID: Sustainability has become a popular topic in Mexico City and worldwide. What are some ways that you’ve ensured that your buildings are eco-friendly?


MR: Sustainability has to be regulated; it should be a code, and not a trend for awards. It’s our responsibility to do it in the best way possible. We like to expand the notion of sustainability to one about social sustainability that’s economical, and not just focus on environmental.

ID: Mexico City is one of the most populated cities in the world. How should our industry approach the challenges of a world that is on track to become significantly more populated?


MR: By having more resilient solutions, we have to learn to be more organic and understand the growing possibilities.