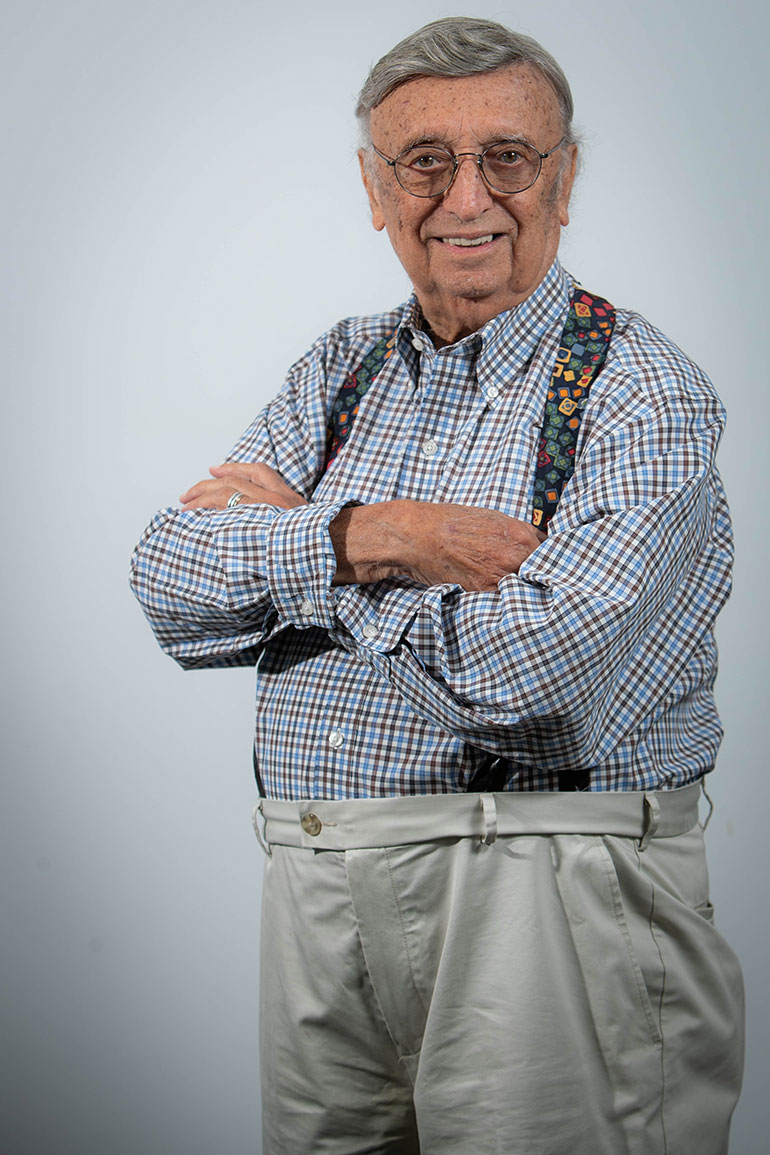 For six decades, MKDA’s Milo Kleinberg has been changing the way we work. As the King of the Garment District in New York, Kleinberg revolutionized the apparel industry in the 1960s by designing innovative showrooms for the city’s biggest brands. In addition, his namesake firm’s more recent corporate interiors for Cambridge University Press, Guggenheim Partners, Design Within Reach, Fab.com, Black Diamond Management, Bank of Ireland, CAA, and countless others remain textbook examples of flexible restraint under the guidance of his son Michael, president of MKDA. Michael’s brother Jeffrey is also actively involved in the firm’s Miami office, which does work across South Florida and recently completed the new S Hotel Jamaica in Montego Bay. And offices in Stamford, Connecticut, along with a just-opened studio in Washington, D.C. under the leadership of Kristín Aldan Guðmundsdóttir, prove MKDA is keeping its eye on the future while celebrating its 60th anniversary. Here, in a conversation that has been edited and condensed for clarity, Milo sits down with Interior Design to discuss how he got into showroom design, his knack for innovation, and his idea of retirement.

Milo Kleinberg: I grew up in Vienna in the 1930s. My father was a fur salesman. My uncle Willy was a window dresser at Schiffman, the biggest department store in Vienna. I got this talent through him.

ID: And you fled Vienna when the Nazis annexed Austria?

ID: Like so many people fleeing political danger and violence, you came to the United States and moved to Brooklyn. Did you go to school there?

MK: I got into the School of Industrial Art, that was there I learned to do things. And then I saw an ad in the newspaper and then applied for a job with the Czech architect Max Gerstl. I went to see him and he spoke German and I could, too, so he said, Come on in!

MK: Max was the head of the Garment Center. He did all the showrooms on the west side of Manhattan and I learned all that, until he let me do them myself.

ID: How long did you work with him?

MK: Well, for more than ten years, and then I wanted to have a partnership. He said, ‘I’ll give you a raise, but I don’t want a partner.’ It didn’t take me more than five or ten minutes to say, ‘Well I’ll give you notice of two weeks,’ and I left.

ID: And you started your own firm?

ID: What was the key, do you think, to your remarkable success? What was your innovation?

MK: Well, for clients like Gloria Vanderbilt and Bobbie Brooks, we divided the showroom. People hadn’t done that. We designed a divider that kept the space open but divided, sometimes in glass. When buyers came in, they didn’t want solid walls. They also weren’t that concerned about sound, because the main thing was showing the garment, not listening to what other people are saying. Each project had a different design, a different look, but the divider was more or less there.

ID: How did you begin working with Larry Silverstein?

MK: Well, with 14ll Broadway, he came to me and said, ‘the building is empty. What do you think could be done?’ I said, ‘I’ll take care of it for you.’ I measured the entire building and made a plan for a floor with a subdivided space. All of a sudden, small units—750 square feet, 1,000 square feet—started to rent. Little by little, within a year or so, the entire building was rented for the first time. And that’s how I got friendly with Larry Silverstein.

ID: As your business grew, your sons joined in. What does it mean to you to have started such a successful family business?

MK: What it means to me is that I’m proud. Simple as anything. I’m proud we don’t fight with each other. My sons come to me for advice and I’m there for them.

ID: Have you thought of retiring?

MK: I hate to use that word. I’m in Monday through Thursday. Friday, I’m not in. That’s my way of retiring!