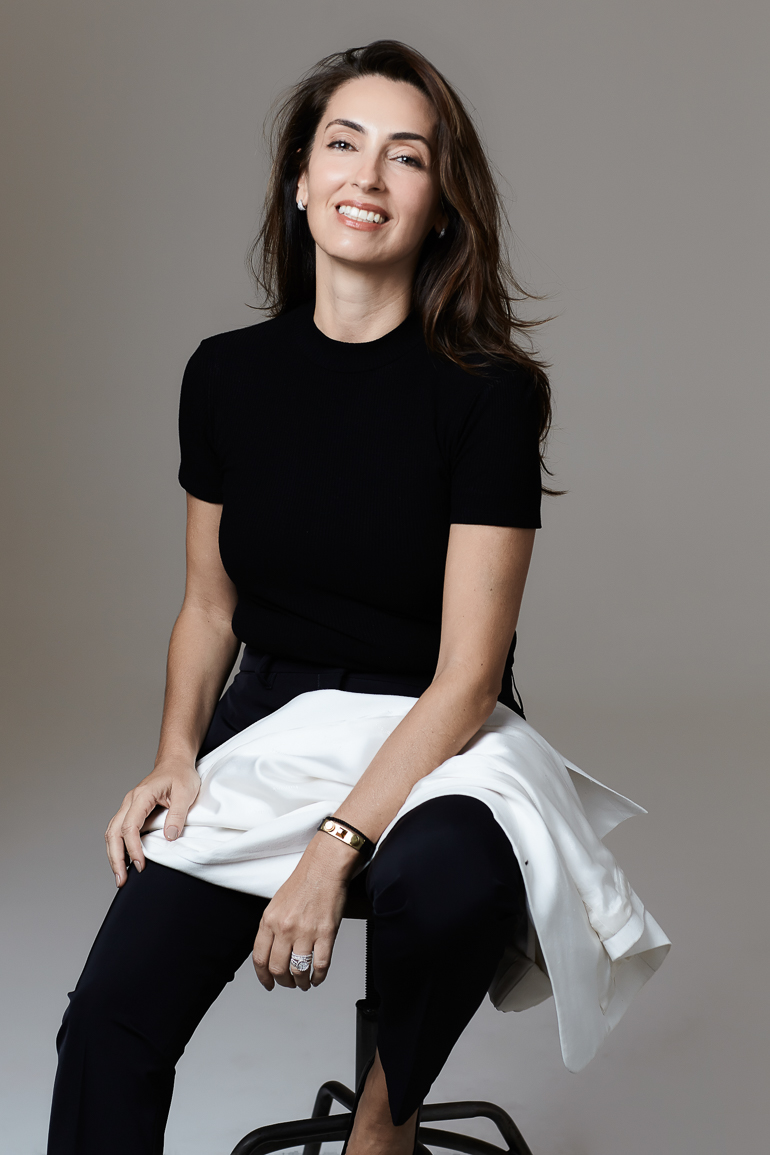 “I believe in dialog,” says the Brazilian architect and designer Patricia Anastassiadis. Since founding Anastassiadis Arquitetos in 1993, she’s argued as forcefully as anyone that Brazilian Modernism should be an ongoing conversation, not a monolog repeating past glories. Meanwhile, she’s amassed a few glories herself, building her firm to almost three-dozen strong while developing projects that prove Brazilian style is itself international, including The Ritz-Carlton Santiago, this fall’s Oetker Collection–Jumby Bay Island resort in Antigua, the new Fairmont Rio de Janeiro Copacabana, and Sao Paulo’s Tivoli Mofarrej.

This year, Anastassiadis was named art director of Brazil’s famed Artefacto; the manufacturer’s handmade furniture, crafted in a meticulous and amiable complex a few hours outside of Sao Paulo, is a perfect match for both her aesthetics and politics. She’s in the U.S. this week, attending Design Miami and Art Basel Miami. But one recent afternoon, Anastassiadis sat in the elegant, delicately Asiatic dining room (“a lagoon” as she calls it) she designed for Jean-George Vongerichten’s Michelin-starred Restaurante Tangara in Sao Paulo, and engaged in a dialog with Interior Design, edited for length and clarity, that as the wine flowed took in concrete, her work with Artefacto, and why designers should be more like doctors.

Interior Design: Let’s start at the beginning. Is your family from Brazil?

Patricia Anastassiadis: I was born and raised here. My father is Greek—his mother was born in Istanbul, but they emigrated to Greece when he was 12. My mother was born in Brazil, but her parents came from Poland. So I’m Jewish on one side, Greek Orthodox on the other, and I have family spread all around the world. Brazil is home, though. It’s a melting pot, just like I am. My father was an engineer and my mother had a law degree but was a fashion designer and writer and painter. One thing leads to another. In my family we are mixed races and religions. We don’t like monoculture. We are not mono, we are pan.

ID: And you traveled a lot to see your family around the world. When did you first become interested in design?

PA: I remember, I was 16 and I’d been to Venice before, but I hadn’t been to Mariano Fortuny’s house. I went there with my parents, and at the time you could go inside areas that now are forbidden. We could see everything, all his books with the fabrics and numbers, and for me an experience I never forgot. It was going inside a genius’s mind.

ID: It made you want to go into fashion?

PA: Well, I grew up inside a fashion factory watching everyone sew, but when I talked about it with my father he said, ‘We don’t have any fashion universities in Brazil.’ I said, ‘OK, I’ll go to Central St. Martins! I’ll go to Bunka in Tokyo!’ (Laughs). He said, ‘I need you to have something here.’ And I’d always liked architecture.

ID: Brazil, of course, is known for its Modernist architecture. What was your relationship to designers like Niemeyer?

PA: He’s a genius, of course, especially when you think about the technology at the time. What he achieved inside of spaces—if you go to Oca and go up the ramps, just think about that silence. Also Lina Bo Bardi. But these designers of the 1950s and 1960s, most of them came from Europe. This influence is Japanese, Italian, German. When I was in university, Modernism was the only movement they said represents Brazil. Which was not true, but it became true. We became stuck in that point of architecture. It’s like jabuticaba, which is a fruit you can only have in Brazil. We cannot be jabuticaba anymore. We are protecting something as if it was a culture, but Modernism is not a movement that started in Brazil, I’m sorry. Don’t pretend this is the only thing we can build.

ID: Why do you believe we think this?

PA: People think Brazilian design has got to be concrete. Which, you know, is not natural to our environment. Brazil is not a friendly climate for concrete because we have almost 365 days of sunshine. We need roofs, we need verandas, an inside/outside connection. So to have these membranes is not a natural or vernacular element for us. But we are taught that. We adopted that. I don’t know if architects want to avoid this conversation. For me it’s interesting how people forget things and try to create another reality. Maybe it’s a sense of importance, the ego. Here in Brazil we suffer a syndrome of thinking we are open—we want to be open to new things—but we are not. Look at the facades in Petra. You have Egyptian, you have Greek, you have Roman influences in the same façade. You can see it. It’s like time travel. And to me that’s beautiful. If you travel through Brazil, it’s like five or six different countries. It’s so rich. In my opinion we need to me known as a country that can mix different flavors. I don’t get why we need to be stuck in just the one story.

ID: So, you attended architecture school and started a firm to tell your own story?

PA: There were other women in my program, but it was not normal. My professor asked me, ‘Why don’t you marry instead of being an architect?’ I actually heard that! The bigger challenge was not having any experience, but like destiny, I was buying some trousers or something one day, I was 22 and had just graduated. Someone in another fitting room saw me and said, ‘Oh you’re a friend of a friend. I’m opening a restaurant. Do you want to be its architect?’ And I said, ‘Yes of course!’ (Laughs) The first month of working was crazy. I didn’t know much, and it was my responsibility, so of course everything was my fault. But I learned. And that’s powerful: When you learn, nobody can take that away from you.

ID: And that restaurant, of course, was Sao Paulo’s famed Filomena, which really helped put the city on the culinary map. What did you do next?

PA: I opened my own firm! (Laughs.) I had an interview to design a private bank. The owner said, ‘Nice to meet you and I saw your work on Filomena, can I see your portfolio?’ I said, ‘You’ve seen it already!’ He said, ‘Well, that’s a restaurant and this is a bank so unfortunately I won’t be able to work with you.’ But I responded, ‘Yes, you’re right. But when I did the restaurant, it was my first restaurant. So, I’m quite sure I can do a bank.’ And he said OK! Today, when I look back I think, how did you have the courage? I didn’t think. I wasn’t afraid.

ID: Since then, you’ve accomplished a great deal in both interior design and architecture, fields which sometimes can be pitted against each other. Do you feel that tension?

PA: I know it may not be as common in the U.S., but for me I cannot disconnect. It’s body and soul. I can’t see one without the other. I don’t like the competition. It might not be feasible, but if you look at the great moments, you have a group of artists helping each other and exchanging ideas, movements, all interacting and helping and challenging each other, saying, ‘This is not good, do it in a different way.’ I don’t see that in architecture. For me, what I’m searching for is to be able to do something bigger.

PA: I’m working on the new Four Seasons in Rio, which is challenging because two of its four facades are completely closed. And I want to create a building that can breathe. A few years ago, I was in Bologna for the fair and I saw a launch of a ceramic that could transform CO2 into O2, into oxygen. Now the technology has advanced and I want to have this on the building. I want to make something that will lower the carbon in Rio. That’s a mission. Otherwise, for me, it’s just another building for my ego, fantastic, in the portfolio it goes! That doesn’t matter now. Every Monday we have a meeting in the office and every Monday I’m talking about it and people are rolling their eyes! (Laughs.) But architects and designers should think more like doctors. We should think more like physicians than as geniuses who want to show their style to the world. It’s a medicine and you need to take it, OK?

ID: Is that how you conceptualize your collaboration with Artefacto—something that’s good for the industry, rather than just another collection?

PA: We need to support local craftsmen and artisans and connect them with the big industries. I work with a three-generation family of glass blowers who came from Venice, and we figured out how to scale their work up. I believe in capitalism, but I also believe in fairness. There’s this urge that everything needs to be brand new, but I’d like to look at a plate and see all the aspects: who made it, what is this glaze and where it did come from, what are all the recipes of this plate? A taxonomy of the object. For my work with Artefacto, I’m trying to have a line with pieces you won’t find from, for example, a good brand in Italy. Something that can bring the essence of Brazil, but not in the way people think, like the samba, blah blah blah. Like the melting pot we were talking about. So, it’s not just the blown-glass pieces I mentioned, but the Soft Fiction series that includes recycled bottle glass inside the terrazzo. And there’s coffee powder for the color I want. I’m working with coconut husk, which has this fiber that is anti-fungal, so you can have a fantastic couch with perfect alignment, but we’ll replace the petroleum and other interior elements that are not good for you. I made a table for this restaurant with discarded horn and fish skin and it’s super sophisticated. But we don’t need to brag about it. The first thing is you have to love the object. We need to create with vernacular, and we need to create healthier things, but we also want to create beauty. Beauty is important for humankind.