Even before opening his architectural agency in 2001, Silvio d’Ascia has had a particular interest in transit hubs as unique building typologies. Having completed his Ph.D. about new urbanity for the city of the next millennium in the mid-90’s, d’Ascia has continued his research and experimentation in this specialized typology by taking on projects that explore transportation hubs as urban linkages between the public and the surrounding context of the cities. D’Ascia’s practice today continues to focus on projects—transit hubs and high-speed rail stations, cultural and housing developments—that connect to their surrounding context and the public. With a number of such projects in the works for Silvio d’Ascia Architecture and an upcoming book on rail stations of the future, d’Ascia discusses the importance of well-designed public spaces and his research in the area of transportation architecture. 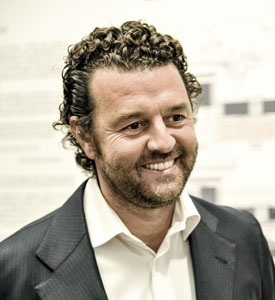 Interior Design: What is the overarching philosophy of your firm? How does this philosophy influence your approach to your projects?

Silvio d’Ascia: Each project begins with an ambition to explore, what I call, a Neo-humanist dimension of architecture. The architect—a sort of “enlightened” individual in the Renaissance sense of the term—has the task of translating modern society’s needs, desires, dreams in a profound and meaningful way for our cities, regions and countries, all the while taking into consideration socioeconomic and cultural contexts. In so doing, one seeks a contemporary urban form: spaces that generate (once again) shared common spaces that encourage social wellbeing, sharing and communication.

Architecture, in general, must create a link between space and society, even more so today, as our everyday practices become increasingly immaterial and abstract (smartphones, nanotechnologies, artificial intelligence, etc.).

ID: What is unique to your work process that distinguishes your studio from others?

SA: What sets the agency apart is its commitment to design that fosters communal living—design that attempts to devise new ways of living together in original spaces, or in spaces that use cultural imprints (heritage projects, cultural institutions—both physical and psychological) in unexpected ways. The agency is becoming more and more aggressive in its analysis and research of an architecture embodying the ideals of shared spaces, even if we find ourselves today confronted with a paradoxically individualist mindset.

Perhaps the easiest building typology we work with that exemplifies such research would be the train station or transit hub. This is such a rich area of exploration for the agency, as it allows us to tackle a wide array of issues related to living and movement, interaction and solitude.

ID: Has your studio changed or evolved since it started?

SA: Fortunately, yes! It would be silly to say that we are not evolving or learning from our previous experiences. What is important, however, is that we continue to move in a direction that takes advantage of the opportunities and the lessons learned from all experiences, both the successes and the projects that did not quite make it off the ground.

I started working in 1993. More than twenty years later, it is obvious that a lot has changed, not only in my personal sphere of influence but also in the architectural profession as a whole. One should attempt to give Architecture (with a capital “A”) an identity that reflects these changes, outside of what one could term as passing (or passé) trends.

ID: Silvia d’Ascia architecture has a long track record in working on transit hubs. What initiated your interest in this particular typology?

SA: The transit hub typology, for us, represents a singular opportunity to investigate and question what a “new” urban form could and should be. It was with the arrival of the high-speed (TGV) train in France in the early 90’s that really deepened my understanding and fascination with this project type. For me, one could say that the invention of the TGV changed our society in a profound way: all of a sudden, we were confronted with a new set of values, different needs and new possibilities to dream. Our realm of opportunities became larger—people could more easily commute to and from work and this is to say nothing of the prospects of a newfound mobility for leisure travel. Mountains, seaside, rural villages, other metropolises—they all became more accessible.

While the invention of the high-speed train was something ingenious, the train and the train station remained elements very-much known to the public. How to, then, fit this new contraption within a societal context already understood? What’s more, with the arrival of high-speed trains came a resurgence in the rail station as a true urban hub—a nexus for international, national, regional, and local rail travel, and a hub for metro and light rail systems, bus lines, taxi stands, cars, motorcycles, bikes. The station had to confront and resolve all of these moving parts.

The fact that a vast majority of these stations are of a classical architectural style all the more emphasized the need to understand and propose contemporary solutions to mobility and user comfort. It is a situation unique to Europe, for sure, with all of the classical station structures located throughout the continent. They serve, in their various forms, as sort of monuments or temples to transport. For me, working within this typology means respecting this history in transcribing it in an updated architectural language.

ID: What is your approach to this very specialised typology? What things do you consider when designing a transit hub?

SA: I consider a rail station to be a plug-in or a connecting element linking city and outlying regions. It is, at once, a transit hub and a place wherein one finds an array of services dedicated to urban life. The most successful examples of this building type go above and beyond the simple programming of these spaces. Instead, they generate exciting and unique public spaces. It is why a rail station is vastly different from an airport, which has its own set of criteria and service spaces and is an element disconnected from the cityspace. Sometimes rail stations are this way as well and that is a shame.

Our approach, then, is about generating a station as a public space: a porous, communicative, and evolving environment. The agency strives to reveal the “double nature” of a station as a place serving as a landmark for the city and as an element that facilitates travel. This ebb and flow, the coming and going, the idea of “staying” or “leaving” allows us to create stations that embody the intriguing threshold that exists within their walls.

ID: With your expertise in transportation hub projects, what do you think the rail station of the future should be like and what conditions does it need to respond to?

SA: In short, the train station of the future is revolutionary in its insistence on serving as a unifying element for the city and its suburbs. In so doing, the station begins to tackle the multitude of questions related to socioeconomic well-being, diversity, equality. The station as a public institution—but also as a living entity—is unique. As the building should also adapt and re-adapt the programs found within its core, the station of the tomorrow is a surprisingly organizational element, and could be the one project typology capable of giving a true vision of the contemporary society—its problems, yes, but also its potential.

ID: What is the difference, if any, between working with clients in Europe versus clients in Asia?

SA: The differences between Europe and Asia appear (at least on a superficial level) to not be to the advantage of European architects. Whereas in Asia, projects advance at a rapid pace, here in Europe and specifically in France, we are confronted with administrative procedures and decision-making processes often times confounding and sometimes disastrous.

A similarity, though, could be that we both remain ambitious. There are differences in scale but there is still the intention and desire to challenge, impress and build. It is not all for the best, of course, but when something exceptional occurs on the architectural scene, both arenas seem to take note. However, I will say that my personal experience has been that, here in Europe, ambition has been reduced to an individual level. It has become privatized, with this privatization sometimes using political structures to further its motives. Globalization, though, has made such conversation necessary.

ID: Your firm participates in a lot of international competitions. What is the appeal of the process of competitions to you?

SA: The sheer challenge makes open competitions quite exciting. Jokingly, maybe I am calling on a sort of subconscious thirst for arena combat, thanks to my Italian roots.

Confronting other architects, other ways of conceiving space is truly a source of inspiration. Sure, it is exhausting and one must separate expectations from reality but, at their best, architectural competitions give our agency a wonderful opportunity to evolve.

ID: What kind of projects do you seek out when you choose to enter competitions?

SA: Well, it comes as no surprise that we do our best to find transit hub competitions or projects related to rail infrastructure. We also go after projects in sectors related to innovation and heritage. With innovation, I am talking about data centers, incubators and the like. This, again, is an area the agency has had a fair amount of success in, with two built technology campuses in Shanghai. The heritage project typology relates to projects where there is a need to renovate, transform or restructure an existing building, potentially adding to it a new structure, as well. Our project for the Maeght Foundation in Southern France exhibits this typology with a renovation of the existing building and gardens designed by Sert, a disciple of Le Corbusier and an addition to the museum buildings.

Cultural projects, thereby, provide a natural environment within which the agency can explore heritage and memory. However, we also encounter these topics in many of our housing projects, as a vast majority of them involve what we call a surélévation, whereby you create a rooftop addition to an existing building. We have three of these projects currently under development in Paris, so this provides an exciting occasion to construct on the rooftops of Paris—a landscape unto itself.

ID: What projects are in the works for you now?

SA: This year will be critical for us in that we have a number of projects under construction. We have two housing projects nearing completion in Paris. There is also a technology center for the RATP (Parisian transit authority) just on the outskirts of the city. Plus, we have an office building complex under construction in Nancy, France. Finally, there is our high-speed station in Kenitra, Morocco, which is an ongoing project. Outside of these construction sites, we have a hotel project in Paris that is in its early design phase. There is also a handful of research projects that we are continuing—one of which is focusing on the rail station of the future. We hope to release it as a book later this year.