is one of the leading architects working today. His latest project is in direct dialogue with an iconic work of a leading architect of the last century. Opened in April, the 120,000-square-foot Reid Building stands across from Charles Rennie Mackintosh’s Glasgow School of Art. The new structure houses a broad range of studios and teaching facilities for the School of Design, as well as workshops, lecture facilities and auditorium, communal student areas, offices, exhibition spaces, and the GSA’s new visitor center: Window on Mackintosh.


Here, Holl talks about confronting history and inspiring a new generation of architects.

Interior Design: In your mind, what makes the Glasgow School of Art such a pivotal project in the history of architecture? 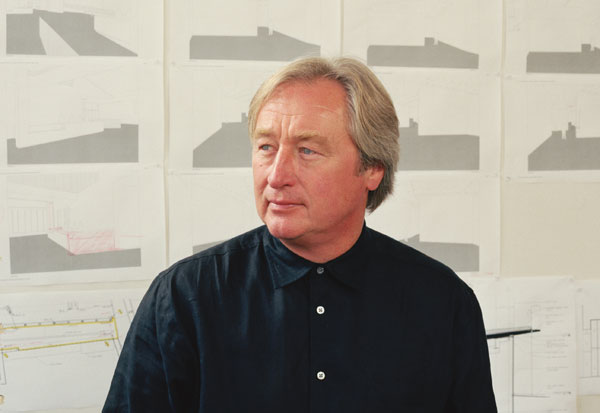 Steven Holl: Over 100 years after completion, Mackintosh’s building continues to inspire as a work of architecture and a place to make art. The invention of an original architectural language and its intensity of detail, light and material is as fresh today as it was then. The Mackintosh building shows us that well-proportioned studios with great light are at the core of teaching and making art, and adaptable through time for changing media and art practice.

ID: What was the challenge for you working in such close proximity to such an iconic building?


SH: The site opposite the Mackintosh Building called for a unique, inspiring and stimulating twenty-first century architecture with a great sensitivity to light, detail, and material. Our Reid Building is an homage to Charles Rennie Mackintosh, whose inventive manipulation of space to deploy light inspired us to invent the Driven Voids of Light, which organize the section and plan as they are the structure, light conduits and fresh air elements.


The Driven Voids provide for the integration of structure, spatial modulation, and light. The driven void light shafts penetrate the building’s core and deliver natural light and vertical air circulation through the depth of the building, providing direct connectivity with the outside world through the changing intensity and color of the sky.


The students have started adopting the building, spontaneously using the spaces of the driven voids for projects, such as their “Color Wheel,” and they recently staged a violin concert in one of the Driven Voids.


We aimed for a building in complementary contrast to Mackintosh’s building – forging a symbiotic relation in which each structure heightens the integral qualities of the other. The exterior translucent matte glass registers the constantly changing Glaswegian atmosphere, in considered contrast to the articulated masonry of the Mackintosh building – volumes of light which express the school’s activity in the urban fabric embodying a forward-looking life for the arts.

ID: Additions to such buildings are always controversial, as this one was. Would you tackle another project like this if it came along?


SH: Most important is a great client. I would need to be supported by a client who loves architecture, as we were with Dame Seona Reid. We are deeply grateful for her leadership.

ID: Was Mackintosh’s Glasgow School an inspirational building to you as you were studying architecture?


SH: In 1967, while a student at the University of Washington in Seattle, our History of Architecture Professor Hermann G. Pundt presented a one-hour lecture to the class of approximately 200 students on the Glasgow School of Art and the work of Charles Rennie Mackintosh. It was an unforgettable hour due to the passion and enthusiasm with which Professor Pundt delivered this special lecture. Professor Pundt had devised his own theory and history of Modern Architecture. Our yearlong education began with Brunelleschi’s Duomo in Florence (and its use of steel in tension), progressed through Schinkel’s Berlin works, on to Louis Sullivan’s Chicago, and ending with the work of Frank Lloyd Wright. I remember Professor Pundt’s passion being so great that we never doubted this was the true history of Modern Architecture (Le Corbusier didn’t appear). Mackintosh’s work, and especially the Glasgow School of Art building, occupied a very emotional and important place in my own passion for architecture from that day forward.

ID: What were some other inspirational buildings?


SH: I lived behind the Pantheon in Rome as a student in 1970 and visited it every morning through winter, spring and summer to experience the amazing changing light. Later that year, I made a pilgrimage to Le Corbusier’s Ronchamp. I arrived at dawn, the doors were already open as the monks had been there and left. Only the crackling sound of the burning candles broke the silence of astonishing space and light.

ID: You teach [at Columbia] while maintaining a very large and active practice. How does teaching enrich your practice?


SH: I feel invigorated by the interaction and dialogue with the students. In a spirit of giving back to the field, the teaching exchange has also kept me on keen focus with the potentials of architecture as it has changed in the last decades. I have learned many things over the years, and consider myself still a student continuing to learn. A number of practicing architects argue that architecture is a dead language that it should only come from architecture. Jacques Herzog says that; Aldo Rossi said it; Giorgio Grassi wrote a book called,


Architecture is a dead language! That means we don’t invent anything anymore, we can only take from existing languages of architecture and regurgitate them in different ways ? I don’t believe that! In fact my studio at Columbia University this Spring is titled, “Language: Structure & Light” and is an experimental exploration.

ID: How does it make you feel that current students of architecture look to your buildings as inspiration?


SH: I am honored and humbled by that?I only hope they visit the spaces and walk through them as it’s the only way the depth of architecture can be communicated.

ID: You have projects on almost every continent. What are the best and worst aspects of building all over the world?


SH: The best aspects are to see the richness and depth of cultural variety, poetry, and art. To experience the world as a globe interconnected and feel the seasons change in changing space. The worst is time spent in banal airport interiors!

ID: Where do you see the profession going in the next 20 years?


SH: Unfortunately it is drifting farther away from the core art of architecture. This moment of developer-driven pragmatism has produced a crop of young people with similar greed as developers. They use literal computer renderings to “sell” terrible designs, in an atmosphere valuing bigness instead of quality. I am dedicated to quality not quantity. So this will be even more rare in the future.

ID: If you weren’t an architect, what would you be doing?


SH: Painting. I almost dropped out of architecture school in 1967 in order to major in art. Every morning, I produce watercolors from 7-9am, which often explore abstract spaces and feelings only distantly connected to architecture.