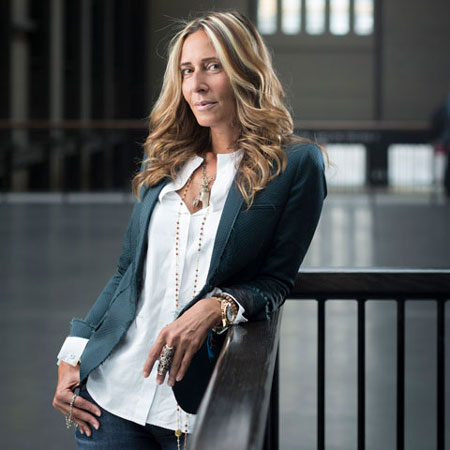 “She is able to imbue her schemes with a feeling of comfort that is both personal and modern.” This proclamation comes from Richard Rogers in his forward to the book, Tara Bernerd: Place, releasing March 7 by Rizzoli. Indeed, Bernerd, an inveterate traveler, is constantly seeking and designing what she calls “homes-away-from-home.” Witness them in hospitality projects her 25-person firm, Tara Bernerd & Partners, has done for such clients as Thompson Hotels, Four Seasons Hotels, and Starwood Capital. Or, just pick up her new book. On the eve of opening a satellite office in New York, the London-based designer tells us more about her process.

Interior Design: Congrats on the book! How was the process?

Tara Bernerd: Thank you! It has been an incredibly cathartic experience and, at times, a labor of love. It was a bit of a struggle to edit down all our work from the past 15 years, but we did it carefully and are proud of the finished product.

ID: Did you always want to be an interior designer?

TB: For a big part of my life I was interested in film; I even went to film school for a period. There are a lot of similarities between the two worlds. Whether you’re designing a building and its interior or making a movie, it takes a mass of creative people, each with individual significant roles, creating something together that must be visually stimulating and commercially sound.

ID: What makes for a successful hotel design?

TB: It’s not just a numbers game. It’s about understanding the demands of today’s guest and moving with the times. The continuing success of boutique hotels means that some of the larger brands have to, and indeed want to, evolve. Rosewood and Four Seasons have flourished because they understand that a brand name is not enough; instead, it’s about the DNA of that brand. What are your philosophies? What are your core values? Once a brand can establish this, it is a holistic process of oxygenating these principles across everything you do—from the design intent to service and operations.

TB: It’s so difficult to deconstruct one’s approach because it has become such an intuitive thing. However, initially, it’s about the interior architecture and layouts—that’s fundamentally where everything starts. It’s about feeling the space and working out how to best optimize it for the end-user. Then once the layout is established, we look at the palette and here is where the DNA of the project is born—the resulting floors, ceilings, and walls all respect that DNA or design story. It’s here that you might have a great wood come into play for the walls or cork for the ceiling. From there, we continue layering, starting first with fabrics and furniture up until details like books and vases.

ID: How would sum up your aesthetic in a few words?

TB: The feedback we often hear is “intelligent space-planning” and “masculine elegance.” So, if I was to pick up on that, I would say it’s handsome and warm with an industrial edge.

ID: What projects are you working on now?

TB: In London, we’re working with Barry Sternlicht on the Principal hotel, and also helping reconfigure the restaurant at the Hari hotel, which reopens this spring. We have two hotel projects in L.A., collaborating again with both Thompson Hotels and Sixty, a new project just started in Mexico, and are continuing our work on the Harilela Group’s Wanchai, Hong Kong hotel, set to open in 2019.

TB: I recently traveled to Ravello, Italy, and stayed at the Belmond Caruso Hotel, which was epic, possibly one of the most beautiful places in the world. But there are so many hotels that top the list. The Belmond Hotel Splendido in Portofino is impeccable, from the people who work there to the setting; it is a brand to be reckoned with. I feel most at home in one of my hotels, and Sixty SoHo in NYC is perhaps the one I’m able to visit most often. It was my third hotel with Jason Pomeranc, so he was, therefore, open to my instincts for the project. The overall vision was less is more, to embrace the building’s heritage and the historic neighborhood. The palette of petrol blue velvets, gray wood paneling, and tinted mirrors in the public spaces makes for a seductive mood, while the guest rooms have been subtly reimagined to create that home-away-from-home experience.

ID: What’s your residence like—comfy and colorful or minimalist and neutral?

TB: I’m constantly on the move, but when I’m in London, my apartment in a Norman Foster building along the River Thames is my base. It completely embodies my design philosophy, with its mix of concrete, woods, and blue leathers. A strong, moody Harland Miller artwork hangs in my living room. But the main draw for me is the view—of the water, the Chelsea embankment, and the Albert Bridge. Because of the building’s architecture, it merges the ultra-modern with a local neighborhood feel, all the shops and bars around Battersea Park. It’s rare to find such a view right on the water with greenery and trees around. I’m very drawn to nature.

ID: What historic interior or building do you admire?

TB: I’ve always admired the industrial look of the original loft, such as Pierre Chareau’s Maison de Verre in Paris. It must have been the most fantastic house. It embodies a lot of the philosophies we try to encapsulate in our own projects.

TB: I think one of the main dreams, frankly, is that we’re still here and can keep doing more. I would like to think we can carry on making a mark in the hotel sector, and I still love crafting yachts. It would be fun to do a chic airplane at some point, too.