Thaddeus Briner founded Architecture Outfit in 2008 with an eye for simplicity and the maxim that, as its website charmingly states, “We like to leave people happy.” And over the last decade, they’ve made more people happy than most design firms have, primarily through their work reimaging Chipotles worldwide. Their Aésop concept shops in New York and Massachusetts stopped the fashion and beauty industries in their tracks, with their instantly recognizable shelving and industrial palette.

Now, as AO prepares to stop millions of commuters in their tracks with their TurnStyle retail and food court within New York’s Columbus Circle subway station, owner Briner fills us in on how to transform a post office into a home, the importance of slowing down, and the joys of a classic lounge chair. 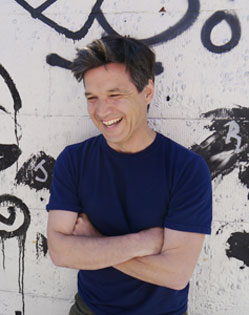 Interior Design: When was the first time you really noticed the design of an object?

Thaddeus Briner: As the son of an architect, I grew up with a lot of things that you wouldn’t see at my friends’ houses. Probably the thing that I spent the most meaningful time with was my father’s Leather Eames Lounger. I always thought about how they packed so much comfort into that small chair. When I stumble upon one now, they seem smaller than the image I have in my mind of what it should be, maybe because I was around it mostly as a child, but also because it’s so efficient in how it supports the body. He bought it for himself after he landed his first commission in the early 60s, and still has it.

ID: Did you have any mentors in school? What did you learn from them?

TB: My first instructor at Rice University, Anderson Todd, was a disciple of Mies van der Rohe and had worked for a time in his office. At the first all-school assembly he called me out and suggested the only reason I got into the program was that my middle name was Mies. Thanks, Dad! So I guess the first thing he offered was that we shouldn’t take ourselves too seriously. More specifically though, he tried to develop in us a desire to look deeper into the things surrounding us and the things we use everyday. In our first semester he had us discussing the functional and design strengths of various coffee cups, to drawing steel connections from the Farnsworth House, the Brick House, etc. We didn’t do these drawings for the sake of drawing, (although we did do them with a Rapidograph pen on Strathmore), but more to let us know that a detail can be more than just a means to just solve a problem, but can also have some meaning within it.

ID: What was the first project you completed that truly made you proud?

TB: The moments that come close to making me feel ‘pride’ are the ones where we see people enjoying themselves in the spaces we do. Opening parties are always fun, because hopefully you see people comfortable and engaged–whether it’s a commercial space, restaurant or home. I think the first one for the office (which was just me at the time) was one of the Chipotle restaurant prototypes in Chelsea, where they dimmed the lights way down and had a big party. People were looking in from the street wanting to get in because they thought it was a crazy bar. (That said, I’m usually looking around at the same time and thinking about how we could have done something better.)

ID: For your Sorting House project in New York City, what were the major challenges of transforming a functioning post office into condominiums?

TB: The main challenge was being able to stay on the project when it got sold from one developer to the current one—that was a difficult process. More precisely though, we were keen to make the project appear as a residential building that happened to have a Post Office within it, rather than a Post Office with a residential hat resting on top of it. There were options early in the process where we thought of it as a glazed box, but it seemed best to have the addition be more substantial and even dominant, rather than a shiny appendage. What we ended up with isn’t so much an ‘A:B’ relationship, but more of an ‘A:A prime’, where we’re still using similar materials and even typological languages albeit with different and more refined techniques.

ID: What legacy aspects of the post office did you retain, and why?

TB: As they will continue to be there as a neighbor in full operation, we were careful not to lean too hard on Post Office iconography or symbols for inspiration so as to allow each their own identity. However, we are hoping to curate an installation using old stamps within the public spaces that will present them in a slide viewer-like apparatus, and you’d use a looking-glass type of instrument to see the detail of the stamps. We’re also going to install some vintage bronze mail slots for surplus mail in the lobby.

ID: How do you think working from the ground up with Chipotle affected your work on the TurnStyle project?

TB: On one level, you can see them both as exercises in transformation. CMG was already a strong food idea that just needed a design more conceptually attuned to it. “Do a few things and do them well” was our motto for the prototype, and was already their mantra. Similarly, the MTA concourse just needs something that capitalizes on the good stuff that is already there and elevates it. Programmatically, they’re both typologies where most people are essentially passing through with a singular goal: how to get through, or out, as quickly as possible. Our job was to figure out how to slow them down a bit, make it a provocative experience rather than a chore.

ID: TurnStyle fits into a rather small, underground space, with no natural light. How did you address these challenges?

TB: It’s interesting that many retail complexes generally don’t want you looking outside anyway. They like to keep shoppers focused on the goods. And as our client likes to say: “The stores are the stars!” In terms of the actual techniques though, we worked with Lighting Workshop to use the existing ceiling vaults as large reflectors. Along with a warmer temperature lighting strategy than one typically sees in the subway, we were able to get a soft ambient luminosity throughout, which actually makes it a pretty comfortable space. So we ended up with 3000k LEDs and T5s and using Superwhite Ben Moore on the vaults to help bounce the light around.

Within that general overall softness, we have a little sparkle to get some definition, texture, and movement. This is in the perforated central spine that holds all the necessary infrastructure, corrugated and tetrahedral mirrors that fracture and spread out the surroundings when you walk past, and the conduit-tube lights we developed in house–what we refer to as ‘sparkle stix’–that turn the ubiquitous, snaking conduit you see all over the subway, into perforated lighting fixtures.

ID: Your work with Aésop is so distinctive. How do you incorporate such personality into a fairly minimal design approach?

TB: Aésop has a very strong brand and has very strong packaging and display curation, soo regardless of what kind of architecture it goes in, it’s visually durable enough to retain its identity. That’s why they can have so many different architects work on their stores. Two of our stores, Madison Avenue and Harvard Square, had the luxury of going into fairly rich spaces, with many layers of history that we were able to uncover. Although there is a great amount of care given to the millwork components and lighting that we inserted into these blemished spaces, the effect is to allow their product to read (even more) clear and fresh. The Greenwich Avenue space didn’t offer the same kind of existing conditions. However it was so small we thought of it as a kind of ‘vestibule’ space, so in deference to that kind of area, we used walk-off coir matting (coco matt) on all the walls. We thought this had a subtle humor to it, but perhaps more importantly it’s very warm on the eye yet bristly to the touch, affordable, and acoustically great.

ID: What would your dream project be?

TB: Extreme circumstances and restrictions can lead to interesting solutions, so perhaps some sort of polymorphous complex that operates 24 hours a day and has all types of program; perhaps a school, a cinema, and archery range to start out with. It would have some landscape element to it as well hopefully…perhaps in a ski-town. You did ask!