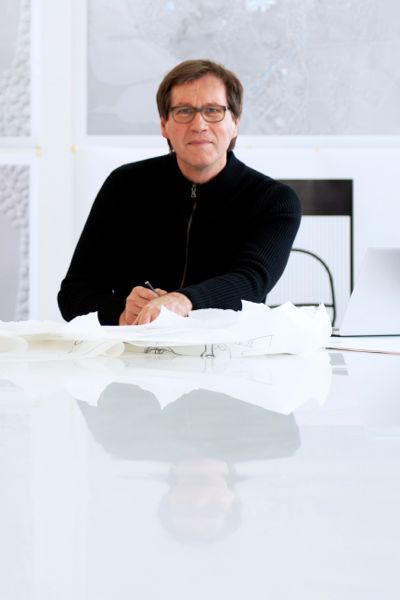 New York-based architect Tom Phifer is respected across the globe, both for his generous and thought-provoking design solutions as well as his coexisting reverence of nature and technology. His work has been highly praised and earned numerous awards, all the while garnering the firm sought-after commissions with significance and heft. A small glimpse of his contributions: the North Carolina Museum of Art, Hudson Valley’s Salt Point House, the U.S. Federal Courthouse in Salt Lake City, and the development and implementation of a forthcoming LED fixture for the City of New York. Here, he talks recognition, collaboration, and inspiration.


Interior Design: Tom, when meeting potential clients, what is crucial to you in order for you to take on a new project?


Tom Phifer: There has to be a commitment to excellence there, and a sense of curiosity about finding the project’s essence. What kind of place do they want to live or work in? What is the expectation here? I love a sense of curiosity, rather than someone who is close-minded. The more clients open their minds to what it might be, the more enthusiastic I get.


ID: And what kind of dynamic do you like to maintain with clients through the planning and building periods?


TP: We’re completely collaborative. It doesn’t feel right to work away and apart from the people who will use what we make. I like to develop an open dialogue and be challenged. We feed off that in a really positive way.


ID: You’ve been recognized for significant, thought-provoking public spaces. How important is it for you to zero in on the intentions for a public space?


TP: Much more than any recognition that a project brings, I’m most gratified when people accept a building and make it their own. If the curators are happy in the way the building turns out, I’m happy.


ID: How do you keep your office motivated and on the same page?


TP: We’ve kept the office kind of small, fluctuating between twenty and twenty-five people at any time. We don’t like more than that. We do projects all the way through, from conceptual design to the end of construction and we don’t like anyone else to do that besides those on our team. If you look at a photo of our office, we all work around one big table in one big space, and it’s very collaborative. Architecture is a very collaborative discipline, and I don’t believe it can be done in a closed way.


ID: And how has your creative team grown and developed through the years?


TP: We have a really great group of folks-two other directors besides myself, seven other associates who’ve been with me a long time-and all of our work is a testament to them. Architecture is difficult, and it takes a committed team.


ID: What would you say is the most satisfying moment of a project?


TP: I have two answers. You have to love the spirit of beginnings and all that curiosity… and at the same time, it’s wonderful when a project begins to get filled up by those who will use it. But what I really love is the making of buildings, beyond the conception. Making all the detail integrated, where all of the parts come together in a holistic way, down to the last screw, to the last moment… that is the part that is really thrilling.


ID: What are the projects you are currently invested in?


TP: We’ve been working on a museum outside of Washington, DC, for the Glenstone Foundation. That project really has to consider the landscape – which is near and dear to my heart – and we’ve been working with artists to develop work for it. At the same time, we’re working on the Corning Museum of Glass in Corning, New York, collaborating with curators and artists. That will be a very large space filled with light and it’s going to be quite spectacular. We’re also working and a Velodrome and field house in Brooklyn Bridge Park in New York, and a building for the GSA in San Juan, Puerto Rico. Additionally, we have three houses at the moment, and are working on a new street light fixture for the city of New York.


ID: What can you tell us about the development of that light fixture?


TP: We’ve been working with the mayor’s office, who have wanted to develop a new LED street light fixture. They’re finally becoming powerful enough to be put on the street, and they’re on track to appear before the time their administration ends.


ID: What are spaces that have served as strong visual inpiration to you throughout your development as an architect?


TP: Three buildings come to mind, which have defined what I love and admire. The first is the Pantheon. When I lived in Rome I went there almost every day. Then, when I went o Bangladesh, I saw Louis Khan’s capital building, and I that may be the most powerful building I’ve ever seen… I’ve always thought it was an extraordinary response to that space and culture. Finally I would say the library that Louis Khan did on the Exeter campus.


ID: Have you noticed your aesthetic choices changing significantly throughout your career?


TP: It’s a journey… a patient journey. I don’t think you can understand what your work wants to be until you get much, much older and have done a lot of buildings and possess an enormous amount of maturity. We’re still learning and growing, and certainly haven’t gotten there yet. At the end of the day, it’s quite a humbling experience to be an architect, because it’s not a journey you’re ever close to finishing.