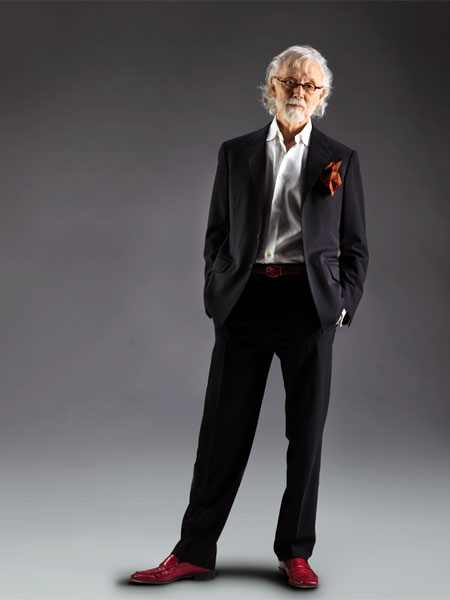 Prolific artist, lecturer, and furniture innovator Wendell Castle is having one of the busiest years of his life. At 80 years old come this November, Castle will exhibit work at a number of museums and his two New York City galleries, Barry Friedman and Friedman Benda. And his “Wandering Forms – Works from 1959-1979” just opened at The Aldrich Contemporary Art Museum in Connecticut, where it will remain on view through February 20, 2013. In recognition of this and in anticipation of “Castle mania” – an ambitious new series of work – we spoke with the artist to discover the inspired path he’s traveled throughout his career.

INTERIOR DESIGN: At this milestone year, how do you perceive the evolution of your design aesthetic since the start of your career?

WENDELL CASTLE: In one sense, it hasn’t changed a great deal, but the path has been a wandering one. There were lots of times when it got diverted into something or other that I decided I would back off of… I have a short attention span and have to move along to something else. As Snodgrass said, “If you’re doing anything you know how to do, you’re not doing anything.”

ID: So can you pinpoint any specific change?

I think that in the early part of my career, I was quite on track. What I’m doing now has a lot of technique in common, as far as laminating wood goes, but I’m much better at it now. I can try new things. Equipment, technology, and the really good people helping me put me in a wonderful position to do a lot of things.

ID: Do you think much about which people will engage with your work when it is being created?

WC: Most of what I design is for myself, not thinking of a client. I do have a gallery that represents me, and they encourage me to be adventuresome and think big. I love to do that, and actually I’m now making the biggest piece I’ve ever done. It’s a piece of furniture, 45 feet long by 15 feet tall. It exhibits at Friedman Benda in December.

ID: And are there any rules you try to live by, as an artist or simply as a person?

WC: I actually made up a poster that was called my “Twelve Adopted Rules of Thumb,” and it’s time for a new poster. Number Twelve, for example, is, “If you hit the bullseye every time, the target is too near.” Then there’s, “It’s better to make mistakes than not make anything,” and “Our questions determine our answers.” They’re guiding thoughts for me. I think of the story, “The Hedgehog and the Fox” [by Isaiah Berlin]. I very much want to be the fox. A fox will come up with new strategies, can live with ambiguity, can live with things that are not so understandable. 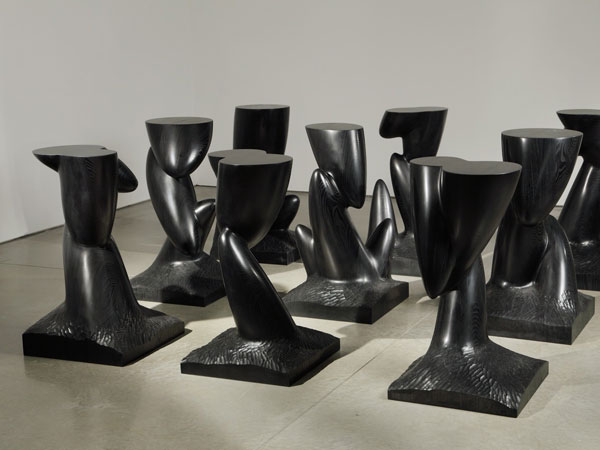 ID: What’s the creative vibe like among those who work in your studio?

WC: Different people serve different functions, and have lots of talents. Some are very talented at carving, some do beautiful finishing work, some are great at sanding, welding, concrete work, or fiberglass. Working with Freidman and Benda has been great, as they take me to all the fairs… They’ve helped me find galleries in London and Paris. A lot of different talents.

ID: Speaking of galleries, you have a number of exhibitions coming up, including a pair that showcase new work in New York City.

WC: I’m quite proud of what’s happening with the next two shows in New York. I’m making these oversized pieces of furniture, and just finished a wooden three-seater-the legs of which are legs off to the side and to the back, instead of underneath. The legs, however, have enough weight in them so it won’t tip. There are also a number of combination piece: a desk and an armchair built together, also without legs underneath. but with a dramatic, sculptural Cantilever effect.

WC: The public at large is a large group, but in general, yes. The collector base has changed dramatically in the last ten years for me. Collectors who buy fine art now have interest in furniture. It’s been great that an event like Art Basel is now connected with Design Miami, and buying a ticket to one gets you a ticket to both. 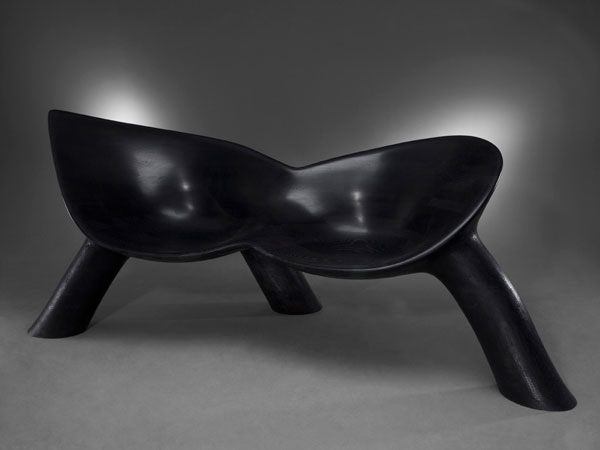 Wendell Castle’s What We Know.

ID: Are there spaces or locales that have inspired you?

WC: I’d say Gaudi’s work in Barcelona and Steiner’s work in Germany have always been inspiring. I’ve been familiar with their work for a long time, and in some sense I’ve been influenced by it.

ID: And how about when you were young to your art form, were there artists you admired from those early days?

WC: I think that a large portion of Brancusi’s work, and his philosophy, was an inspiration because he made furniture and didn’t see it as a lesser activity. That was a difficult one for me to get over since I had studied sculpture. I diverted my attention to an activity that some would consider a “lesser activity,” and I certainly got over that in my own mind.

ID: You frequently serve as a lecturer and professor [currently artist-in-residence at Rochester Institute of Technology]… Is Brancusi’s design perspective one you offer to burgeoning talent?

WC: I lecture on that very point, on finding those artistic characteristics that lift a piece out of the “furniture” category. My current lecture is actually on “thinking about thinking.” So much of design and art is about decision-making. People can draw things that look cute in their pads yet don’t mean anything. It’s about what you pick from your design pad and make.