“Gerald” the hunting dog has inspired his own arts movement. From May 16-19, 120 unique paper versions of the dog’s Bracco Italiano form will be on display for New York Design Week at

. The pack of canines is led by Liam Hopkins, founder of the Manchester, U.K.-based design studio

, tapped in 2009 to help Hopkins rebrand his now seven-year-old practice.

Beginning with a two-dimensional sketch, Hopkins and Sweeney converted the company mascot to a computer model which was then transformed into a three-dimensional sculpture. Each model is made up of several fragile pieces of paper, pasted and folded together to bring forth a steadfast and commanding pointer. (See a video of the process 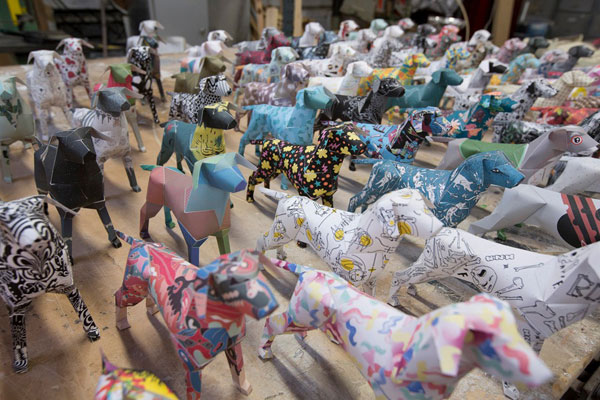 A pack of Geralds in the Lazerian studio in Manchester, U.K. Photo by Pantling Studio.

Hopkins didn’t stop there. Partnering with

, a respected British paper-making firm, he invited artists, illustrators and designers to customize the dog. Starting in 2011, he sent out hundreds of paper dogs all over the world from the U.K. to South Korea, asking the individuals to put their own spin on the design.

Two years later, 120 dogs have returned to their master from 105 designers, decorated with everything from ink and paint to hand-sewn felt. Hopkins says of the dogs, “It’s as if each one has a soul. Simple materials have been given personality and value.”

Limited edition prints will be available for purchase, at only $30—a steal for a purebred you don’t even have to walk. 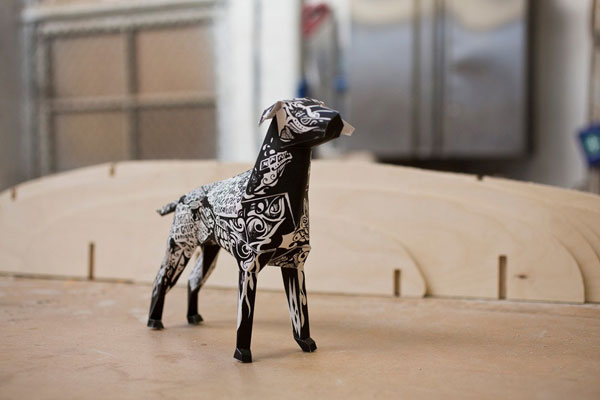