hospitality Giants, hotels—especially luxury and boutique hotels—accounted for 54 percent of all hospitality fees in 2012. This has been a steady trend for several years now, with the entire industry de­pending on this segment for a major chunk of its business (78 percent of hospitality Giants had luxury-hotel projects last year). The next largest percentage of hospitality-fee income was restaurant projects at 14 percent. 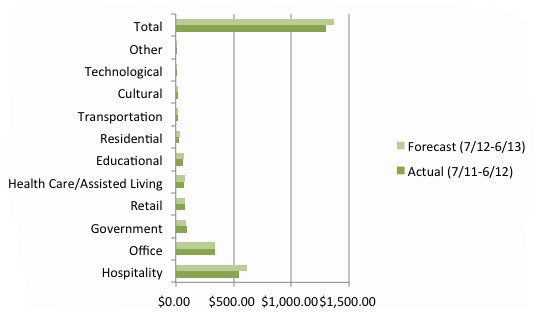 Future work will be coming from various directions – some familiar, some new. The hotel trend shows no sign of falling off, as 91 percent of hospitality Giants expect to work on hotel projects in the coming year (almost the same number as 2011). Resorts, spas, and country clubs should also remain robust, with 66 percent of firms expecting those projects (again, identical to the 2011 numbers). Here is an overall look at at overseas versus domestic and renovation versus new construction in the year’s hospitality projects:

One word describes what to expect in the coming year: growth. Are we being too optimistic? Well, check these final numbers: In 2010, only 24 hospitality Giants reported positive growth. This year, 58 were in the black. In 2013? Only eight firms forecast negative growth. Not too shabby. Or to put it in hotel parlance: suite. Keep reading for the full picture (the research methodolgy is