Roots, as in a profound knowledge of place, a passion for the landscape. Variations on that theme are oft-heard. But David Lake and Ted Flato , Texas natives both, really do walk the walk. Small or mega in scale, every one of their projects embraces the specific topographies, ecosystems, and climates of a state that was once a nation of its own. “Our philosophy is not stylistic. Forms come from a bit of science. Of course, there’s always art, too,” Flato begins.

“Growing up here,” Lake chimes in, “was about being outdoors.” He was born in Austin and earned his bachelor’s in architecture from his hometown University of Texas. “David’s the more sophisticated one,” Flato says with a laugh. Born in Corpus Christi, he headed West to earn his architecture degree from Stanford University .

Lake and Flato met while working at O’Neil Ford & Associates in San Antonio, absorbing the tenets of “Texas modernism.” In 1984, the two founded Lake/Flato Architects nearby. The firm now numbers 76. 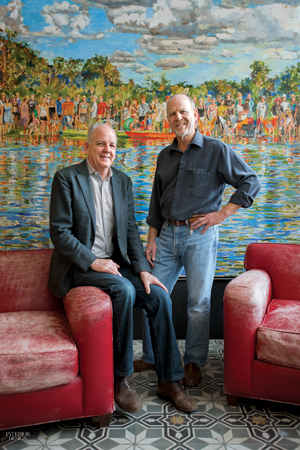 At the outset, projects were residential, in-state. The very first, on a ranch, was “more porch than house,” Flato recalls, “to work with the harsh south Texas climate.” Slightly later came one of the best-known projects, the renovation of the Thunderbird hotel —without which Marfa might not truly be Marfa, at least for hipster visitors. “You need a great place to stay in that environment. It’s rough,” he says. Much lusher is Austin’s Hotel San José : Lake refers to its courtyard lounge as “an oasis.” A sanctuary of a sacred nature, the city’s Congregation Agudas Achim takes a form derived from ancient Jewish nomadic tents; a steel mesh canopy helps control acoustics.

Projects steadily expanded in scope. Residences grew into compounds. At a lakeside property in Austin, the main house connects via a bridge—over the lap pool where the owner trains for triathlons—to guest quarters and a garage-gym. A nearby house has concrete walls massive enough to support the weight of an immense roof garden. “Structure is ornament,” Flato says. In Santa Fe, New Mexico, long shedlike structures are sited around “desert garden rooms,” he continues. For an example of the architects’ pitch-perfect use of materials to meld interior and exterior, go to Scottsdale, Arizona, where the concrete of a house’s flooring extends outside to become the pool surround.

Back in Texas, ranches are inevitable, but Lake and Flato’s are exceptional. The four buildings of one ranch are flat-roofed limestone-and-glass structures. Materials switch to corrugated and perforated Cor-Ten steel for barns at another ranch. Forget house envy—this is horse envy.

A barn vocabulary informs educational projects as well. At Arizona State University’s health-services center, certified LEED Platinum, planks of composite decking screen window walls, beneath shade-providing overhangs in corrugated steel. Learning environments at Shangri La Botanical Gardens and Nature Center in Orange, Texas, are open-air pavilions. “We prefer spaces with openings on two sides to allow for balanced day-light and cross ventilation,” Lake says with regard to the firm’s large stake in sustainability. Case in point, a pavilion for Decatur’s Dixon Water Foundation aspires to be Texas’s first “living building,” meaning it’s self-sufficient in terms of electricity and water use for at least 12 continuous months and meets rigorous standards for green materials and indoor air quality.

A large part of the firm’s green-minded portfolio is adaptive reuse. Adding a sawtooth roof and clerestories to a pair of 1920’s warehouses in San Antonio gave them a second life as a residence and a studio for the owner’s graphics firm. Even more creatively, when a warehouse at the Alamo Cement Co. plant was about to be razed, Lake/Flato rescued the steel frames and trucked them to the Hill Country to be reassembled as a house’s master suite, porch, and garage-shed.

Most ambitious among the reuse schemes is a master plan for San Antonio’s Pearl Brewery . The 26-acre mixed-use development welcomed its first tenant, Aveda Institute , in 2006, and the firm converted the main building into the retail-friendly Full Goods Warehouse in 2009. Here comes the neighborhood.

>>See more from the December 2014 issue of Interior Design