The latest addition to Milan Design Week’s already bulging Fuorisalone program is Ventura Centrale, a group exhibition housed in a row of former warehouses beneath the city’s monumental Central Station. Produced by Dutch curatorial consultancy Organisation in Design, the event is a companion to the popular Ventura Lambrate design district. The disused vaults were formerly used as laboratories, studios and depots, but have been abandoned for 30 years. Ventura Centrale sees this raw industrial setting become the backdrop for a carefully curated showcase of innovative contemporary design in the heart of the city. 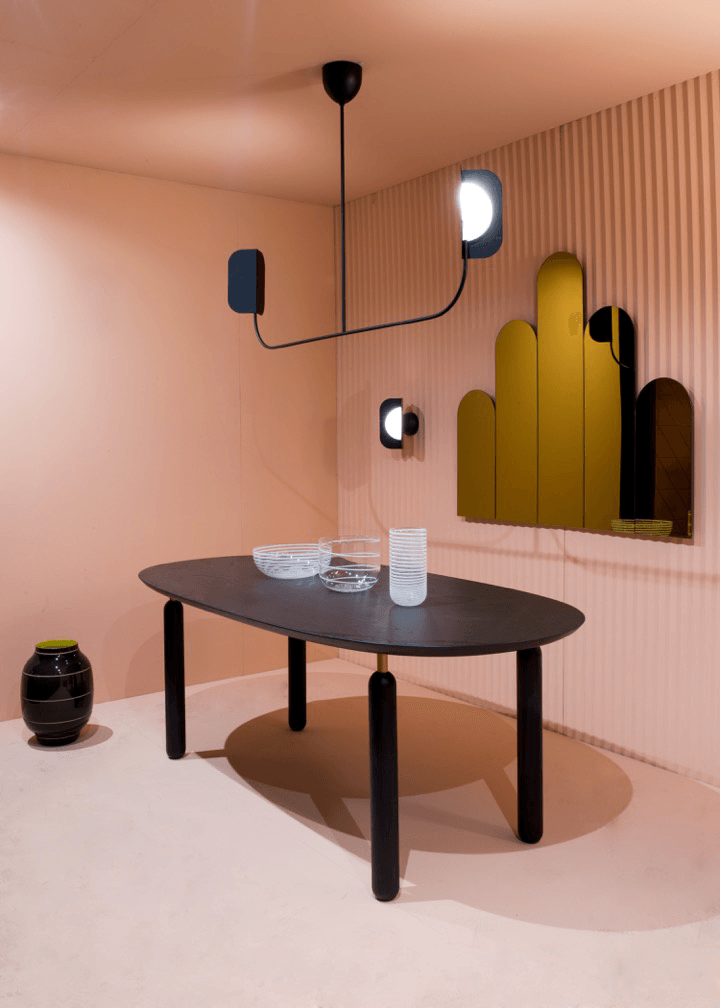 The first of the concrete arches contained a collection of colorful sets that introduced visitors to the work of Italian designer Matteo Zorzenoni. Furniture, lighting designs, accessories and blown-glass elements were grouped in simple displays, with hues that complemented one another and the vivid backdrops. The products produced by manufacturers MM Lampadari, Nason Moretti, and Scapin are representative of Zorzenoni’s experimental approach to using materials, and the design of the SET installation offered a striking counterpoint to the raw setting of the industrial space. 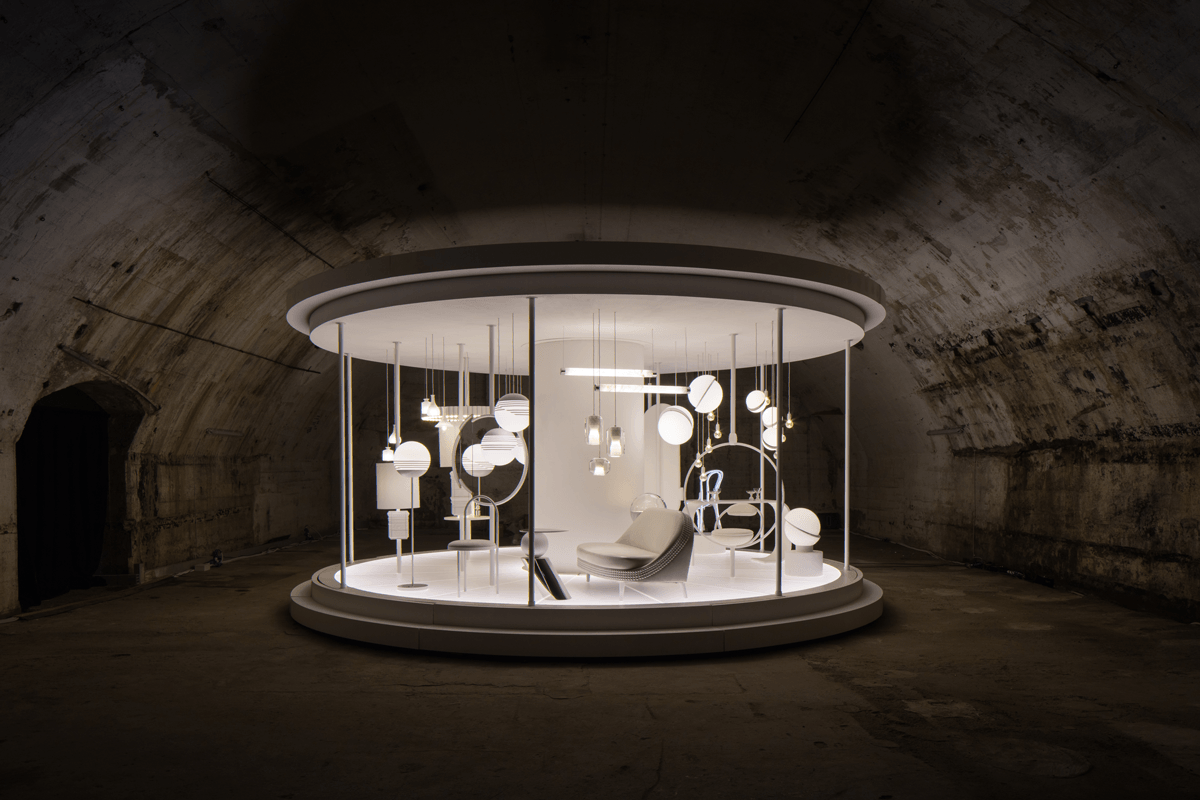 British designer Lee Broom presented a retrospective of key limited-edition works developed since his studio launched in London ten years ago. Products including his Decanterlights, Hanging Hoop Chair, and Carpentry Console Table were presented in all-white versions on an illuminated carousel that rotated slowly at the center of the space. A Carrara-marble grandfather clock displayed at the rear of the space will be produced in an edition of ten pieces to mark the studio’s anniversary. Broom told Interior Design that the rawness of Ventura Centrale’s spaces was what enticed him to exhibit at the show, and added that the idea for the carousel display was informed by shape of the arch. 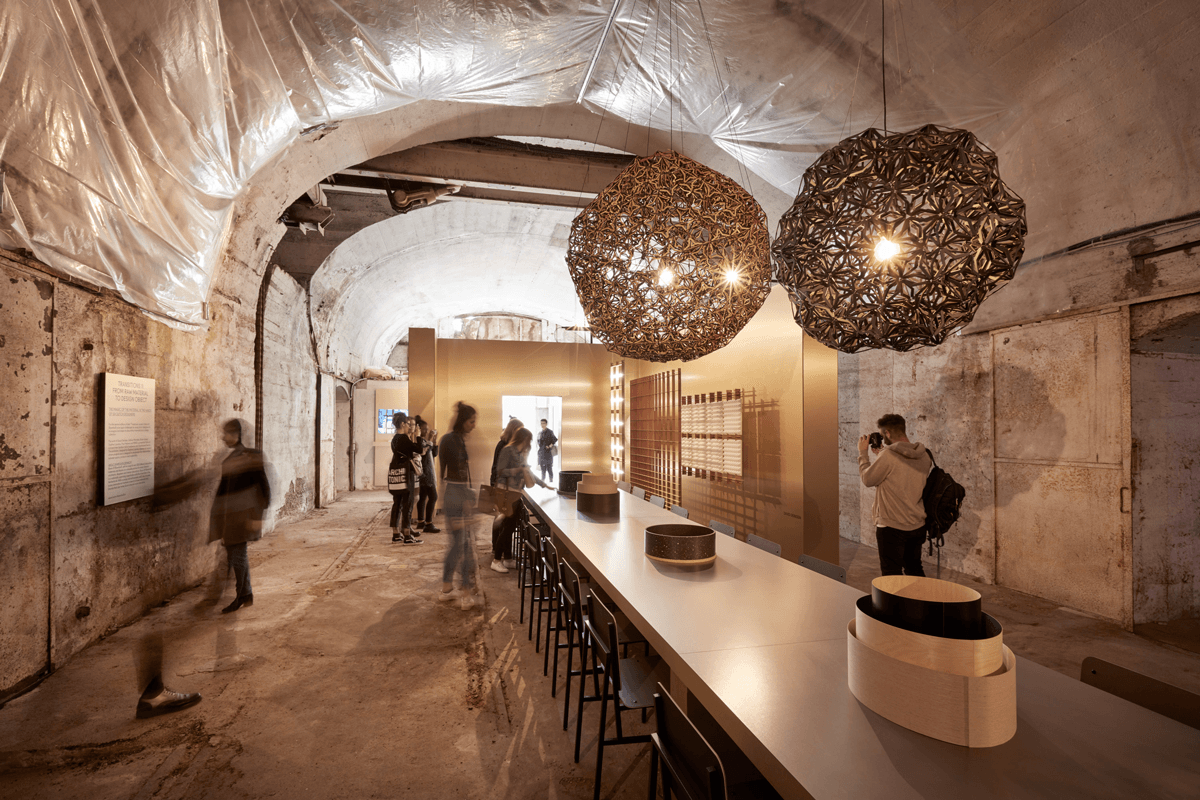 Dutch materials supplier Baars & Bloemhoff presented six projects by designers who were invited to experiment with products from the firm’s extensive catalogue. Transitions II was first exhibited at Dutch Design Week in 2016 and reinterpreted for this show in Milan. Eindhoven studio Daphna Laurens developed a scenography using an aluminum material that is robust enough to be used as a dinner table for an event during the week. Klaas Kuiken revealed the usually hidden latticed structure of a lightweight wooden surface material called Finsa Greenpanel in his dresser and wardrobe, while Paul Heijnen used Finsa Color MDF to produce enormous pendant lights from hundreds of hand-assembled modular units. 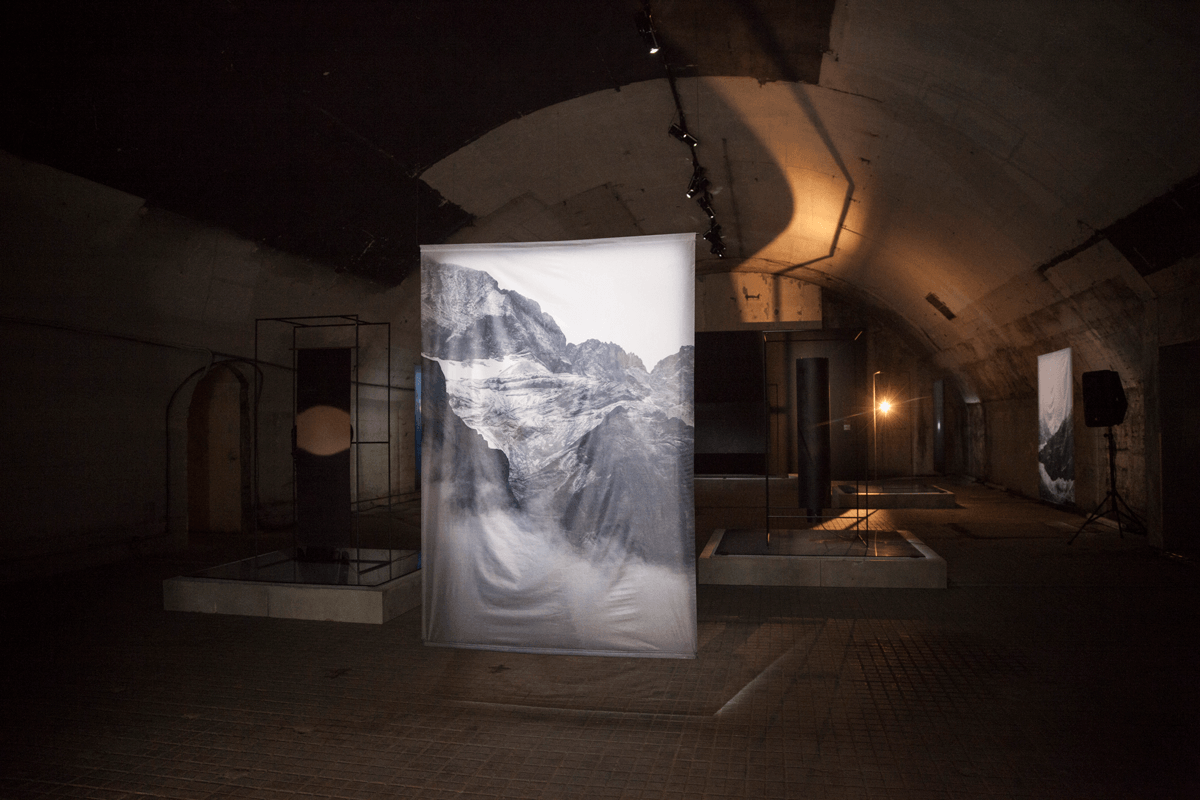 Swiss studio Panter & Tourron showcased its Passages project, which comprises a series of sculptural copper objects that are treated with a black thermochromatic ink. When an extremely hot bulb shines on the surface, the ink becomes transparent and the raw copper beneath becomes visible. The project was developed for smokeless cigarette brand IQOS and sought to create a tangible representation of heat as a design element. “We wanted to create a project around the idea of nature meeting technology, so we used this innovative material to physically represent the waves of heat,” said designer Alexis Tourron.

Maarten Baas and Lensvelt Present “May I Have Your Attention Please?” 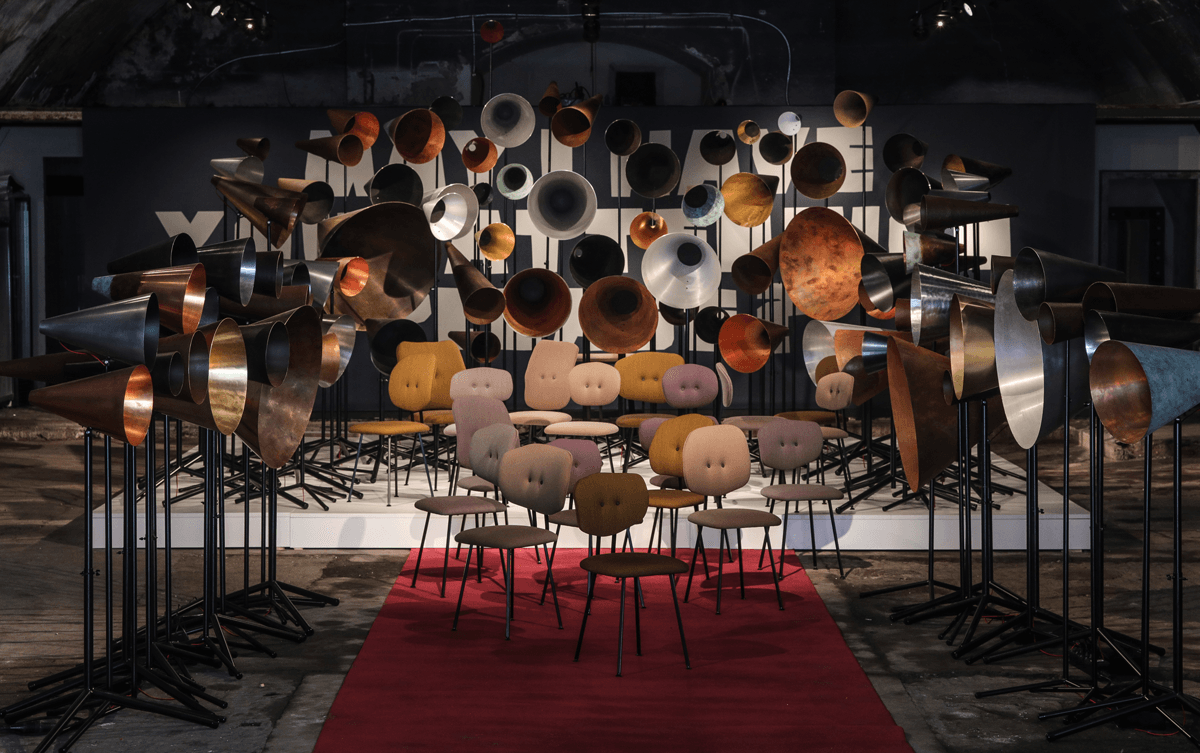 A new chair by Dutch designer Maarten Baas for furniture brand Lensvelt also debuted at Ventura Centrale. The 101 Chair challenges the notion of mass production by combining a frame and seat that are always consistent with a back that is molded in a unique shape. The chairs were displayed alongside a sound installation featuring dozens of variously sized metal bullhorns, some of which contained speakers that project whispered voices. “The voices are indistinguishable, they are clips taken from all sorts of sources, and for me they represent the energy of people,” explained Baas. “I feel like we live in a world where attention is almost as much a currency as money is or power. It’s an interesting phenomenon.” 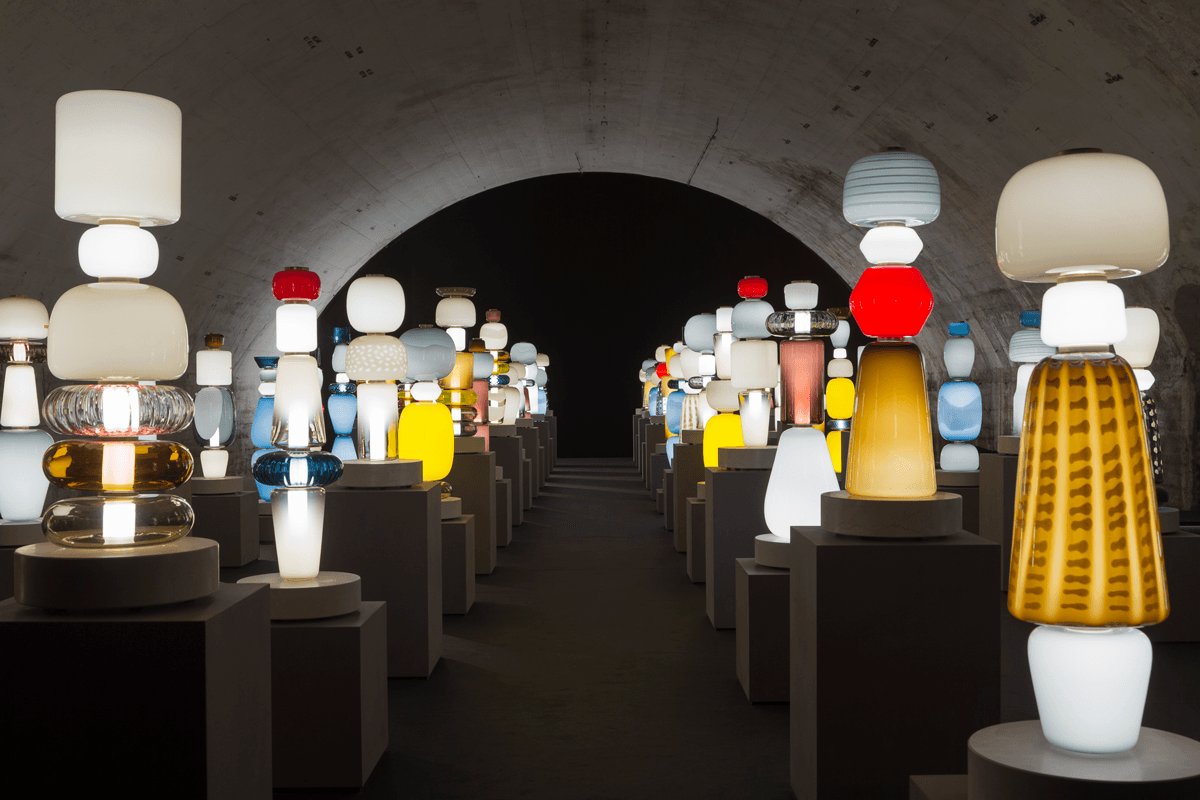 Glass specialist Salviati commissioned designers Luca Nichetto and Ben Gorham to fill two adjoining arches with custom-made installations that showcase its traditional glass craftsmanship. The Strata space featured a group of light sculptures made using 6,072 folded glass sheets with different colors and textures. The glass elements were clustered around light sources to create what the firm described as “a vision of transparency, colors, and light.” The second arch was filled with 53 totems comprising stacked multicolored glass modules. The illuminated totems demonstrated a variety of glass-blowing techniques and can be combined in different ways to enable the creation of more than 10,000 configurations. The brightly colored installations were a big hit on Instagram throughout the week.

View the slideshow for more images >