“My definition of public,” Andrea Woodner says, “is anything you don’t need a key to get into.” By her estimation, therefore, the elevated freight railway now transformed into

park was already nearly public space back when she used to trespass, technically speaking, on the abandoned tracks in all their weed-choked glory. She was a professional sculptor then, and her studio was four blocks away. She could not have envisioned the masses of tourists walking along High Line today. Nobody could have. But their presence is largely due to the

, which she founded to serve all New Yorkers.

Sitting in her high-ceilinged apartment in a charming brick building in the heart of Greenwich Village, Woodner says she has loved the city her whole life. Walls in the living room are painted a chic shade of gray, and the furniture is muted mid-century. This is not the home of a struggling artist, precisely. The decor is grown-up bohemian, as envisioned by Pierce Allen’s DD Allen and later refreshed by noted modernist Suzanne Shaker. 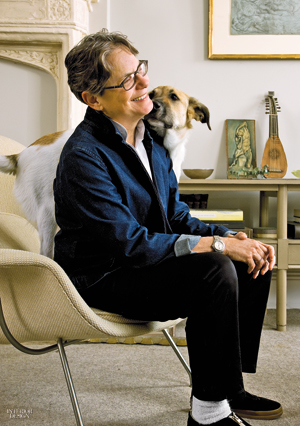 As a teenager, Woodner haunted the galleries of the Frick Collection. The aspiring sculptor never thought twice about design—something that  changed the day she packed her bags for a flight to Paris. Her journey began at the Trans World Airlines terminal at what’s now known as

reinforced-concrete tour de force was an artwork as sculptural as anything she had ever admired on a pedestal in a museum.

Woodner’s art background gives her an appreciation of process—she loves the way a nail enters a chunk of wood. “Sculpture is a physical creation, and I’m very much a primitive,” she offers. Her pieces were abstract and audacious, with jutting planes of wood and steel.

When she set aside her torches and sanders and went back to school, taking classes at the

before earning her master’s in architecture from the

, she was surprised to discover that she was not solely captivated by the aesthetics of buildings. “What made my heart beat was their meaning,” she recalls. Great buildings, of course, start with structure. To illustrate the point, she sets her Jonathan Adler coffee cup down on top of a plastic pen, then gestures at the resulting tilt. “The pen is the reason the cup sits at an angle,” she says. “You can hide the pen if you want, but something has to do the job.”

Linking the expertise of trained designers with the interest of the general public was a main reason for founding the nonprofit Design Trust in 1995. A remarkable sort of think tank, it simultaneously supports creative people and the common good. It was the trust, for example, that was willing to take on the conversion of the High Line, doing the heavy lifting to clear legal and political obstacles at a time when a demolition order was already pending.

Today, as the president of the board, she continues to spread her message while working mainly behind the scenes. Designing for Children, which encouraged kids to get their hands dirty making mud pies and sand castles at city playgrounds, has become a calling card. Another initiative, the Taxi of Tomorrow, is the first city taxi in decades to feature an adjustable driver’s seat. “For when a 6 foot 9 driver gets out and the 5 foot 6 guy gets in,” she explains. Of course, some observers have debated the yellow cab’s boxy look. “It doesn’t really blow your skirt up visually, but I love it. I’m not going to quibble,” Woodner says. She’s keeping her hands off, allowing designers to play.