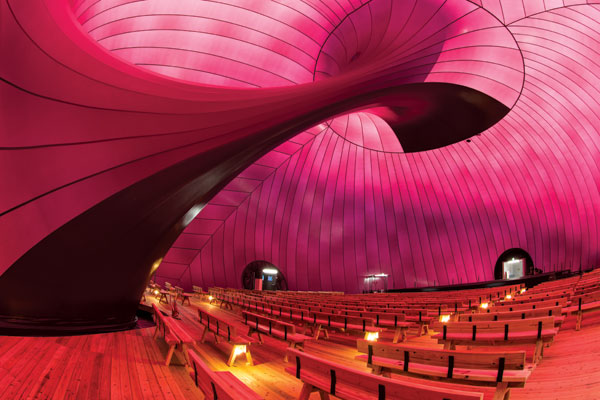 
On the Japanese seacoast ravaged by the 2011 earthquake and tsunami, music wafts out of a massive plum-colored bean or doughnut, actually the world’s first inflatable concert hall. The PVC form of

rose in the span of just two hours in the middle of a park in Matsushima, thanks to the assistance of two cranes and a large pump—and the inspiration of sculptor

. Fully inflated, the temporary structure reaches 60 feet high by 120 feet long, big enough to seat 500 on four-person benches. Those benches, the flooring, and the acoustical panels are cedar from the ancient trees that had framed the entrance of a nearby Buddhist temple before they were felled by the high waters.


Kapoor and Arata Isozaki were commissioned by the Swiss nonprofit

, which also organized such programming as a workshop by Los Angeles Philharmonic music director Gustavo Dudamel. Festival directors hope that Ark Nova, by moving to other hard-hit locales, will draw international attention to a region still suffering. Deflated, the membrane folds up into a 2-ton package measuring 7 by 10 by 33 feet, an easy traveling size for a modern-day Noah’s Ark. 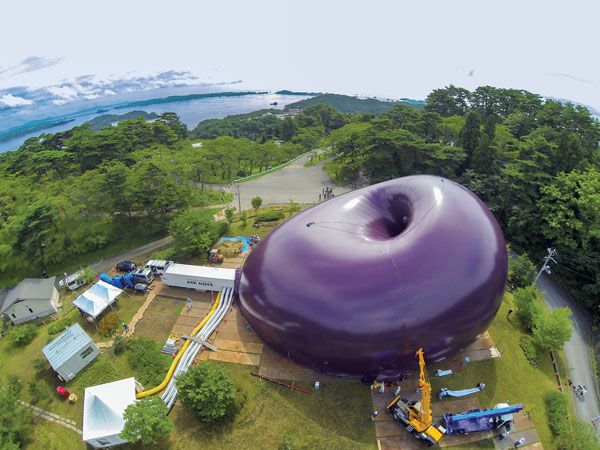