In the 1950s, hundreds of towns across the U.S. began to lose their industrial base. What followed was a massive population decline and abandonment of land that continues to plague many of these same towns today. Recognizing the need for urban redevelopment,

is an independent private organization founded by New York-based David Lagé, principal at

, in 2011 to conceive and implement new uses for vacant urban landscapes. Zooming in on Buffalo, New York, Terrains Vagues has selected one solution, the grassroots initiative

, as its pilot project due for installation in 2013.

Lagé found potential in the vacant space on Buffalo’s East Side, where over 20 percent of the land is empty. Explains Artfarms co-curator and architect

, “Artfarms are becoming possible through our collaboration with local artists and urban farmers who have already transformed these once-residential, abandoned lots into small farms serving local groups.” Since vacant land is typically cheap and plentiful, it’s perfect for urban farming. However, soil contamination necessitates above-ground structures that hardly gel with surrounding residential neighborhoods and discourage developers. Agriculture alone will not repopulate the area. “Artfarms takes it a step further to repurpose the farmers’ land for outdoor art installations,” says Salvini.

Installations by regional artists who are inivited to participate are partly a means to an end. “We’re hoping to establish a cultural destination within the neighborhood in order to attract creative entrepreneurs and promote its revitalization,” says Lagé. “It’s not intended to resolve a neighborhood’s problems, but it gives a positive and engaging stimulus to the whole community and helps them to envision a future for the place where they live.”

When we spoke with the organization, they were developing proposals for Wilson Street farm site by the collaborative team of

. Called “Rise and Fall,” these houselike water tanks both nod to the area’s residential past and provide the farm with access to rainwater. Another artist, Michael Bietz, is proposing a large-format table sculpture. 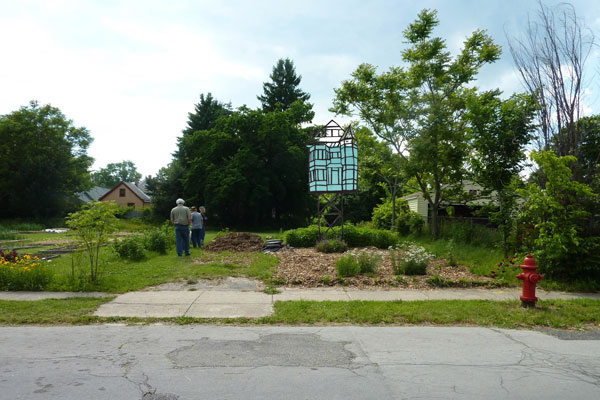 What’s next for Terrains Vagues and Artfarms? Though the latter was launched just earlier this year, the initiative is gaining traction. The end goal is for Artfarms to attract creative entrepreneurs to vacant parcels of urban land in Buffalo and beyond.