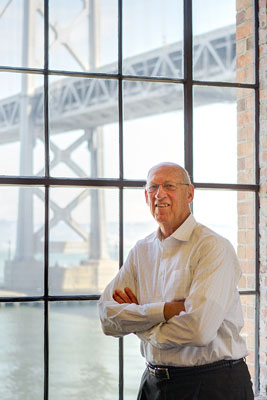 in 1965, and now serves as its Chairman. He has an international reputation as an expert in office buildings and work settings, serving as an advisor to the U.S. General Services Administration and as a consultant to an array of leading companies, institutions, and public agencies in the United States and abroad.

Through Mr. Gensler’s leadership, his firm has grown from a three-person office in San Francisco to a global design practice with 1,800 professionals in 25 cities from East Asia to Western Europe. His firm’s reputation as a model for the design professions in the 21st century led to its being named the American Institute of Architects’ Firm of the Year in 2000. This is the highest honor the Institute bestows on a collaborative practice. The Gensler firm received a similar honor from the AIA’s California Council in 1995.

An architect by profession, Mr. Gensler is a graduate of Cornell University, which named him “Cornell Entrepreneur of the Year” in 1995.

He serves on the Buildings and Properties Committee of Cornell’s Board of Trustees, on the Cornell Real Estate Council, and on the Advisory Council of Cornell’s College of Architecture, Art and Planning. Mr. Gensler has also been a Visiting Professor at Arizona State University, Cornell, and the University of California at Berkeley, where he is on the Advisory Board of the Haas School of Business. He is a Trustee of the National Building Museum, Washington, DC, and the Buck Institute for Aging, Novato, California.

Mr. Gensler is a Fellow of both the American Institute of Architects (FAIA) and the International Interior Design Association (FIIDA), which honored him with its Star Award. A charter member of Interior Design Magazine’s Hall of Fame, he is widely credited with establishing interior design as a recognized profession. He is a professional member of the Royal Institute of British Architects, and a co-founder of the AIA’s National Interior Architecture Committee.