A computer rendering of two residential units on a proposed Blueseed ship.

is working on bringing “international entrepreneurs into international waters.” At its foundation (or lack thereof), Blueseed seeks to station a very, very large ship 14 miles off of the coast of San Francisco, just outside the United States territorial waters. The company envisions the ship as a way around U.S. Immigration laws, which limit the number of visas granted to foreign professionals. If realized, the ship will serve both a residential and commercial purpose, housing up to 1,000 international entrepreneurs, 200 crew members and office space.

If the project launches in early 2014 as planned, it will be the very first development of its kind. Blueseed has even coined a new term for this type of permanent sea dwelling: seastead. 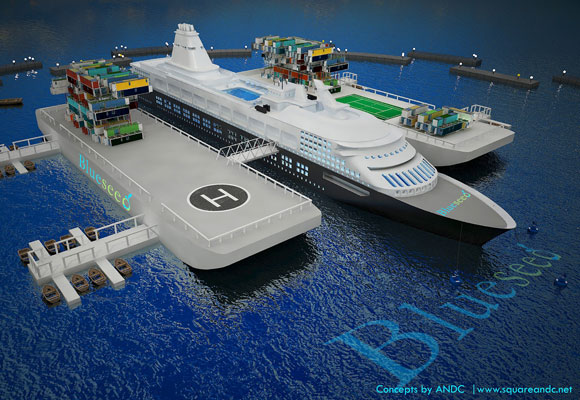 A rendering of a repurposed cruise ship stabilized by barges and moorings.

Two designs are favored. The first would be a retired cruise ship stabilized by the use of moorings. The second is a Small Waterplane Area Twin Hull (SWATH) ship which allows for greater stability due to the double-frame model. Necessities such as medical personnel, high-speed internet, and land-bound transit are provided to entrepreneurs as part of the package. The ship will also be equipped with all of the amenities of a luxury land apartment such as dining venues, recreational facilities, and entertainment venues. Some renderings even show large outdoor parks. 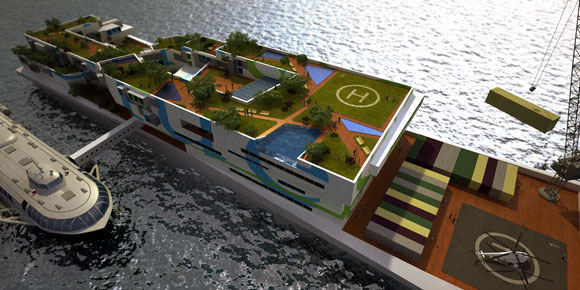 A rendering of planting containers.

Despite the recent advances of the

, Blueseed believes that the bill will be stymied in the divided Congress or it will simply take too long to pass. Situated near the bustling Silicon Valley, Blueseed targets the tech companies in the area which have historically relied on talented immigrants.

Blueseed CIO Dan Dascalescu asks, “Why is the United States turning away talented entrepreneurs? The current immigration laws limit the number of visas given to foreign professionals, and it seems unlikely that the Startup Visa Act will pass.” He continues, “[Blueseed] will give Silicon Valley [companies] the opportunity to retain some of that talent.”

It’s difficult to ignore a few evident obstacles to the plan spearheaded by Dascalescu, president Dario Mutabdzija, CEO Max Marty, and CFO Sam Bhagwat. At the 14-mile mark, the ship will be outside the U.S. territorial waters, but it will not be outside the contiguous waters where the government retains an enforcement zone on immigration laws. And what if the Startup Visa Act passes, would the company lose its market?

We’re interested to see how the interiors develop, and whether Blueseed’s ships will ever get their chance to blow us out of the water. 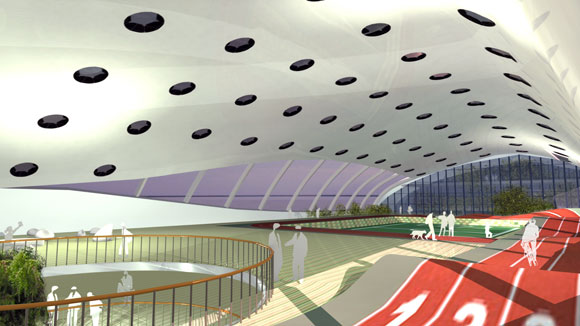