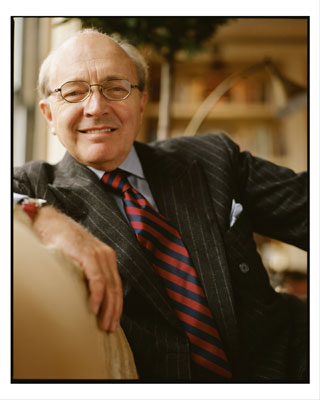 is one of the world’s most sought-after interior designers. While he has made his name as a neo-classicist, his erudition of architecture and decoration is wide-ranging and continuing.

David received his architecture degree from Pratt Institute in 1963, where he studied with Sibyl Moholy-Nagy, the widow of one of the founders of the Bauhaus. Upon graduation, he received the Fountainbleau scholarship, which enabled him to travel and study in Europe. When he returned, he took a position with the New York designer Edward Wormley, whose Dunbar furniture line is now part of the permanent collection of the Museum of Modern Art. In 1967, he joined the venerable firm of Parish-Hadley, where he worked in both the architecture and decoration departments. There, he admits to being “seduced by decoration.” David founded his own firm in 1972, and quickly gained recognition for his classically inspired, traditional interiors. In the 1980s, his English-style interiors became emblems of the age.

In recent years, he has shifted to a more streamlined, contemporary aesthetic as a response to his own shifting tastes and those of his clients. “It’s necessary to move forward,” says David. “I see a desire to simplify life, and for less complicated interiors. I think the future will be about a more intelligent use of resources and a more intelligent support of lifestyles.”

In addition to his residential work, David has designed collections for

Hall of Fame in 1992, David is a frequent lecturer. His keynote at NeoCon 2004 was titled “Return of the Jetsons: The American House, Past, Present, and Future.” In the same year, he was also invited to design the entire Marshall Field’s Trend House, further testament to his leadership in the field of residential architecture and design. David has twice been presented with Classical America’s Arthur Ross Award, and most recently, his peers honored him with the “Lifetime Achievement” award at London’s Design & Decoration Awards.