This week, Interior Design hosted a whopping six segments on DesignTV by SANDOW. In case you missed the live shows, here’s a recap ranging from two Town Halls hosted by Editor in Chief Cindy Allen—one spotlighting the Jacob Javits Center, which now serves as an alternate-care hospital in New York City, and the other the David H. Koch Center for Cancer Care—to several 1on1 chats, to a (previously filmed) walk on the beach with Hall of Famer Anda Andrei. 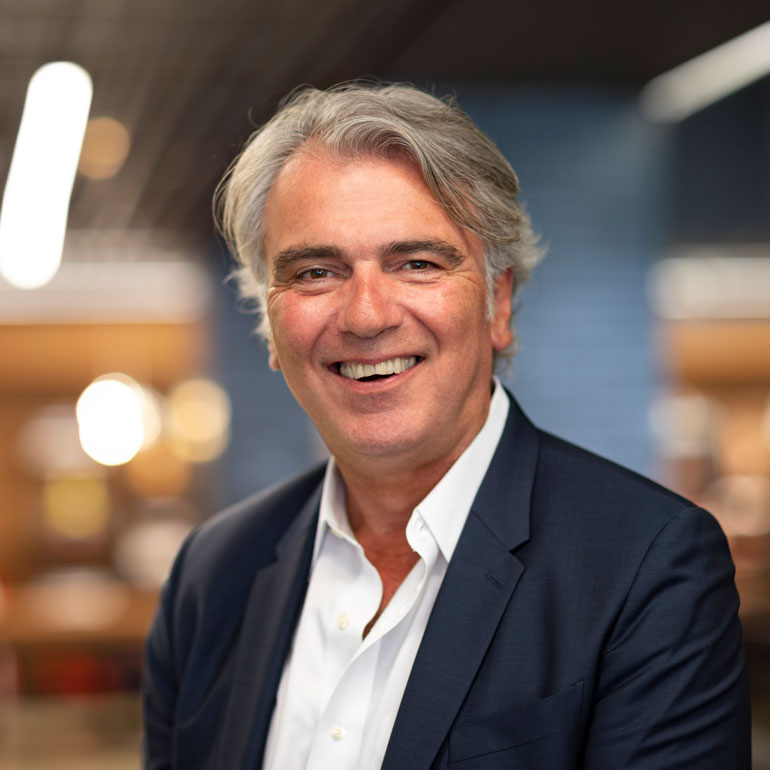 On Monday, Allen hosted James Crispino of Gensler, Guy Geier of FXCollaborative, and Hall of Fame member Calvin Tsao of Tsao & McKown Architects for a Town Hall discussion on the Jacob Javits Center in New York City. On April 1, 165 members of the New York District of the Army Corps of Engineers transformed the 1.8 million square foot convention center’s main showroom floor into a temporary hospital to accommodate more than 2,000 non-COVID-19 patients.

Originally designed by I.M. Pei’s Pei Cobb Freed & Partners, the building has become a city icon, and Tsao kicked off the discussion by recalling his experience working under Pei on the original structure in 1982. “I started with counting bathroom tiles in the men’s and ladies’ room,” he said with a laugh. “But it really opened my eyes to the politics of how things are done when you’re working with city and state organizations to create a building that has such a civic nature. It’s not just an economic stimulus strategy— it’s also a place where so many people come together, from car and art shows to amazing parties.” (We’ll take the compliment—the center’s River Pavilion was the site of Interior Design’s Hall of Fame gala and Best of Year Awards in 2018 and 2019.) 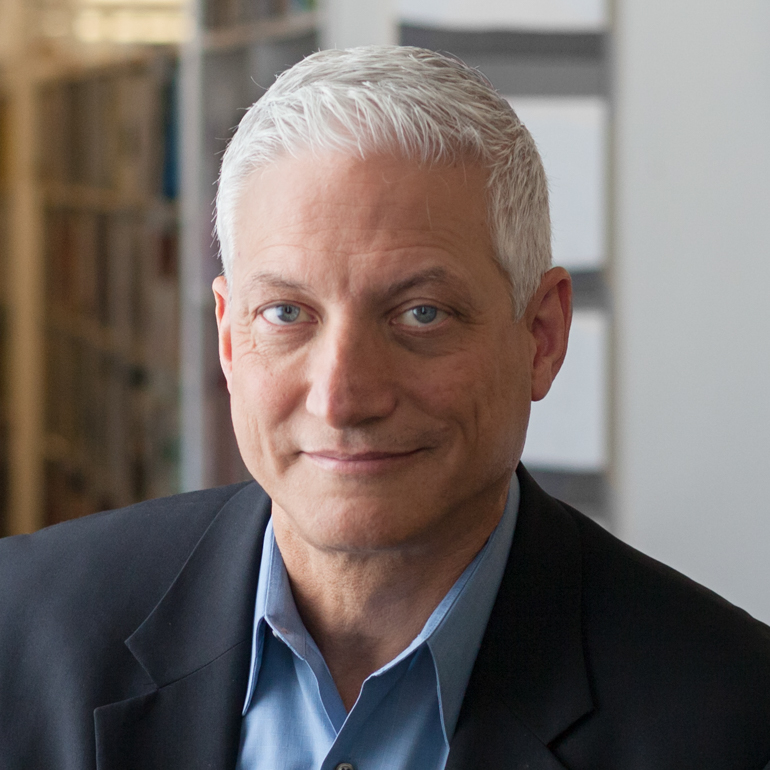 A little over a decade ago, FXCollaborative updated the entire building to be more ecologically sound. Before the renovations, the building’s fate hung in the balance, with the possibility of its being moved to Queens. Geier helmed extensive renovations, which included replacing the main hall’s iconic glazing with new, more energy-efficient glass, and overseeing the addition of a 6.75-acre green roof. “[The Javits Center] has really helped to transform the city’s west side and what we’re now seeing in Hudson Yards. It’s become a real anchor for all of that,” he said. 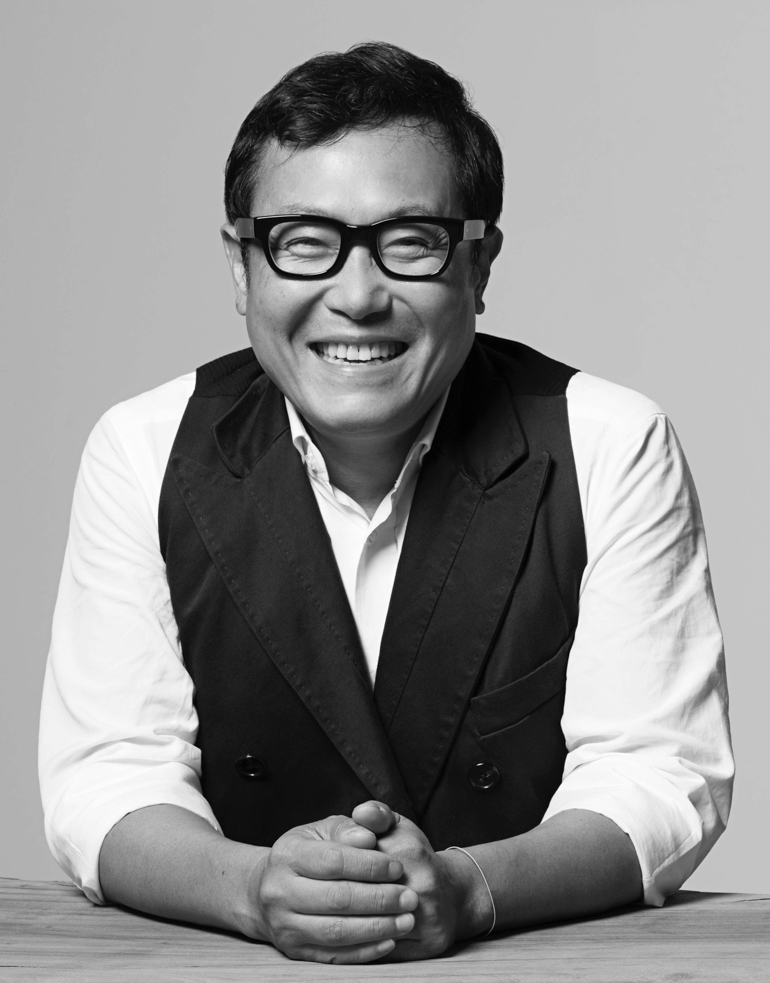 With ambulatory care facilities on the mind, Crispino took the opportunity to discuss Gensler’s 95,000-square-foot Queens Health Center, a collaboration with the Hotel Association of New York City and New York Hotel Trades Council to provide NYHTC members with quality outpatient care. The building broke ground a little over two months ago, shares Crispino, who is Gensler’s Healthcare Leader and Principal.

“As everyone knows, hotel occupancy has dropped to a tiny fraction of what it was before,” said Crispino. As a result, hotel workers have mobilized to transform empty buildings into temporary housing for visiting medical workers. As with the Javits Center transformation, said Crispino, “It’s about really smart people coming together in a way to transform the municipal infrastructure to transform the community in a way we hadn’t expected before and which is remarkable to watch.”

Up next, Denise McGaha joined Allen for a 1on1 segment in partnership with Mr. Steam. Denise called in from sunny Dallas, where she continues to juggle around a dozen active projects in her work as a residential designer while sheltering in place. Her backdrop was her own newly renovated bathroom, where a vibrant wallpaper and painting perfectly encapsulated her “texture on texture” style of design.

Her own bathroom is fitted with one of the Mr. Steam shower systems McGaha uses in her projects. “When you wrap your head around the fact that you could have a sanctuary and spa in your own master bathroom, it’s a new level of luxury,” McGaha said, noting that she and her family used their own steam shower almost daily for relaxation and for its health benefits, including improvements to respiratory health and skin quality. “You just feel better when you’re done with a steam,” she said. That’s something we could all use in our homes now more than ever.

Watch the 1on1 segment with Denise McGaha here:

The new building, located on New York’s Upper East Side overlooking the East River, is the result of a decade-long collaboration between the three firms and Memorial Sloan Kettering’s own in-house design team. “We had to be forward-thinking about what the project could be, and what cancer care could be” said Heeley. That sentiment reflects the fact that innovation was a central part of their design philosophy, while all the time thinking about giving patients the best possible care. “I think this is a beautiful idea,” Allen said, “Could the building itself help make you better?”

Patients might visit the building, which mostly provides outpatient care, up to 100 times per year. For that reason it was important to provide a welcoming and familiar space. “People have a real emotional response to the place they receive treatment,” Ohayon said. “What if you actually wanted to come here?” The team found many places where they were able to use technology to that end, for example by allowing patients to roam the facility freely and having doctors find them at their location rather than requiring the to wait in a designate area. “Technology unlocks choice,” Ohayon continued. “When you’re receiving this kind of care, making your own choices is a powerful thing.” This is one case where good design can truly save lives. 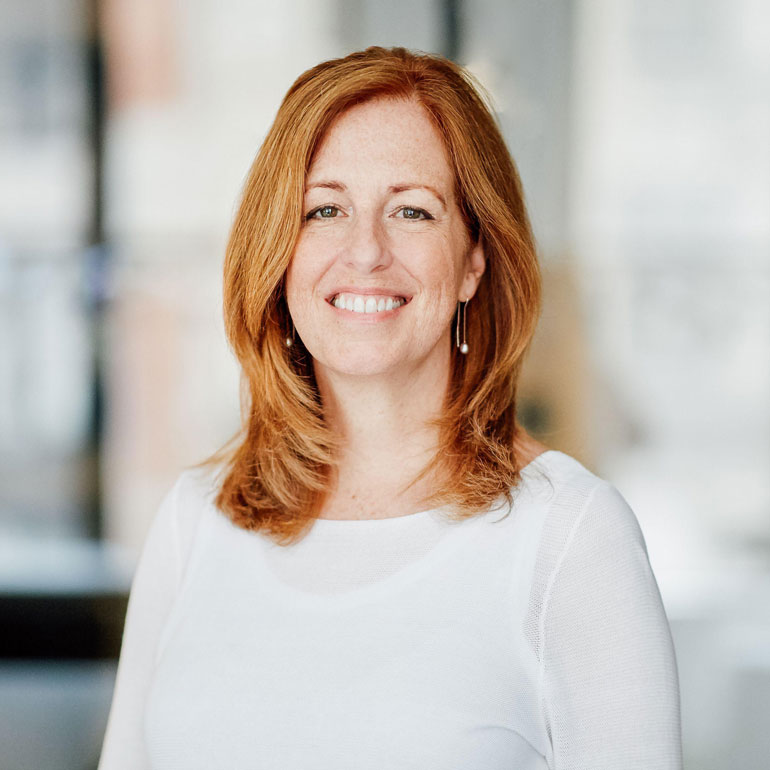 On Tuesday, Allen sat down for a 1on1 with Carolyn BaRoss, IIDA of Perkins and Will. Alongside senior project designer Aiko Tanabe, BaRoss recently spearheaded the design and completion of the MUSC Shawn Jenkins Children’s Hospital and Pearl Tourville Women’s Pavilion in Charleston, South Carolina, a facility integrating pediatric and obstetrical care.

With healthcare design increasingly in the spotlight, BaRoss talked about the challenges that come with creating a warm, welcoming space for children, and how these spaces might be designed so as to consider the needs of children who have Autistic Spectrum Disorder and might be triggered by environmental stimuli.

BaRoss also discussed how the team accounted for caregiver burnout in spite of space and budget limitations. “The client team expressed to us that it’s challenging to take care of kids who are really ill as well as their families. They really put their heart and soul into it. When we were looking at options for how to lay out the roof garden and roof deck, for families to find respite, we wanted to also carve away a space for caregivers to get away—a space to find support or even to get alone and cry.” BaRoss explains the caregiver space as a “wonderful little lookout over the water. You can watch the sunset from there. There’s just a little bit of cover, a few swings. It’s meant to be a place where you can see the sky and get some air.”

Perkins and Will is also in the midst of relocating its New York office, and BaRoss divulged some information on how the pandemic has encouraged the firm to rethink the design of its new workspace, especially in terms of materials—whether surfaces can be adequately disinfected, for example. Other unforeseen concerns might include hand-sanitizing stations when workers eventually return to the office. At a time when health and wellness is increasingly in the A+D spotlight, says BaRoss, “We need to engage with science to know that what we’re doing is responsible.”

Watch the 1on1 segment with Carolyn BaRoss here: 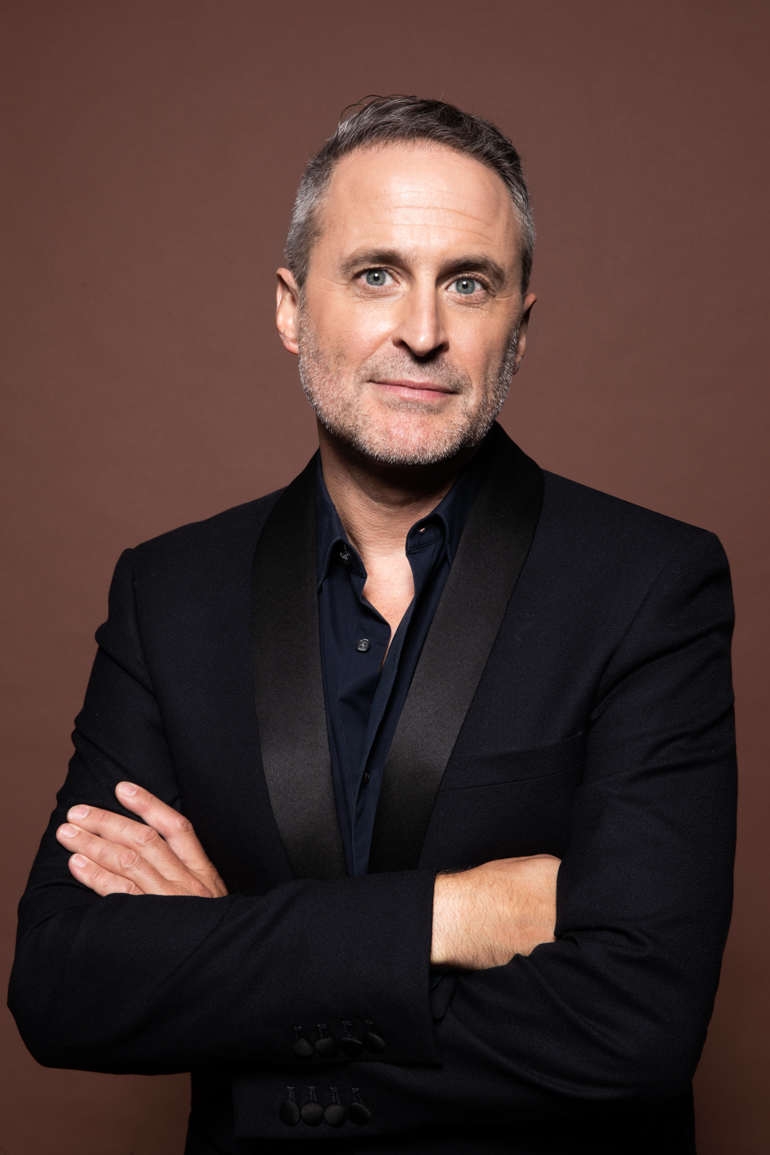 Wednesday’s DesignTV by SANDOW programming began with a 1on1 interview with Allen and Adam Farmerie, one of the four partners of the AvroKo design and concept firm based in New York. The conversation focused on one of their specialties: Hospitality. From The Hoxton in Chicago to Maslow’s Mortimer House, a members-only club in London, the folks at AvroKo are known worldwide for their innovative and awe-inspiring projects, which viewers caught a glimpse of on screen. AvroKo aims to offer clients a sense of security, significance, and surprise with each design.

“Hospitality is the place where people get to play the most,” Farmerie said, citing how commercial success often is dependent on how much a space stands out in the market. Now, “hospitality design has to rethink itself” he said, thinking ahead to the next 12-18 months. Years into their careers, the partners at AvroKo stepped into co-ownership positions for certain hospitality spots they designed, such as restaurants, and learned the importance of “hospitable thinking.” Speaking to the collaborative nature of designers, Farmerie said: “We have to sit around the fire and tell stories.” A perk of his job is working with other creatives, who also thrive on collaborating and connecting with friends and colleagues—Iron Chef Stephanie Izard being just one of many.

Watch the 1on1 segment with Adam Farmerie of AvroKo here: 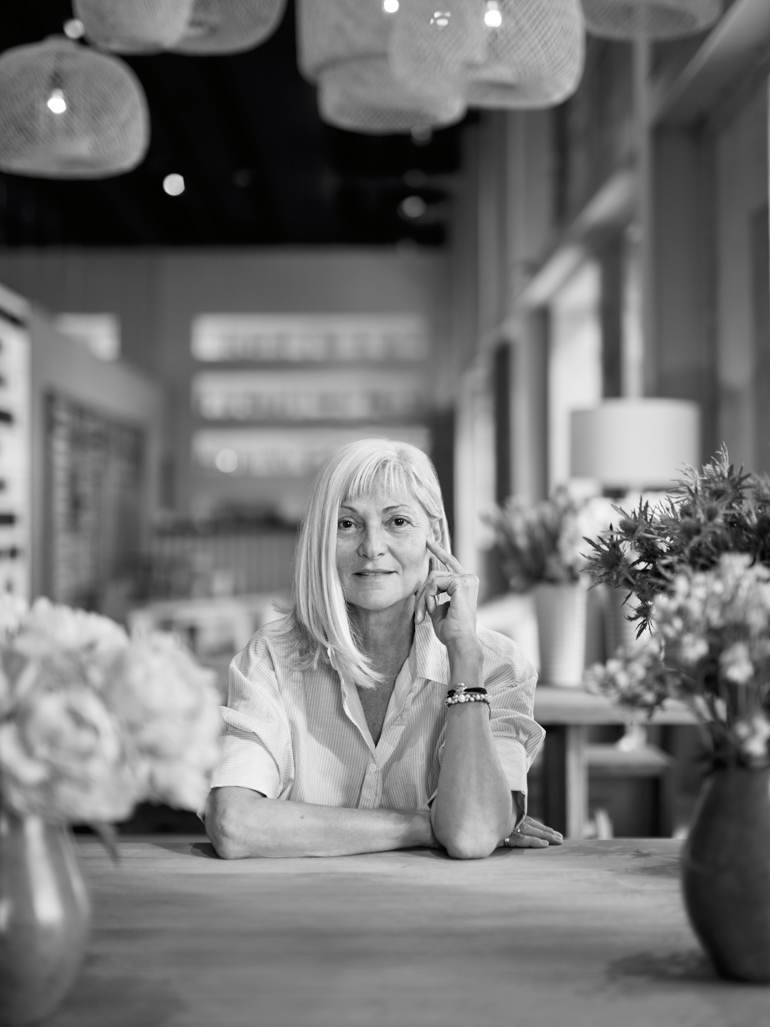 Following her chat with Farmerie, Allen connected with Anda Andrei for this week’s edition of Design Giants. The segment began with a short video, filmed pre-pandemic, featuring the two women talking and walking through the seaside city of Asbury Park, New Jersey, where Andrei reimagined so many buildings that she jokingly held the title of “Queen of Asbury Park.” After the film clip, Andrei joined Allen virtually from her house in Miami—a city she hoped to get acclimated to through gradual visits, though stay-at-home orders have shifted those plans. “In Miami, sidewalks have become gyms,” Andrei said with a smile, noting that fitness is ingrained in the community.

Throughout the conversation, Allen delved into Andrei’s impressive career, many decades of which she spent working for someone else before realizing her desire to go off on her own and start her own practice. “You have a good instinct about what’s next… what do you think is going to happen in hospitality?” Allen asked her guest. Andrei’s response? A return to more traditional values, such as spending more time with family and cooking at home, which means spaces will need to reflect these shifts. “To rebuild the consumer trust will be a cycle,” Andrei said. “There’s something elegant about it, something gracious…yes, we can adjust to that.”