Over 1,150 members of the design community were treated to a veritable feast—of the artistic kind—last week at

‘s 16th Annual Dining by Design. They raised a glass and significant money—600,000 plus, to be exact—to fund direct care for people living with HIV/AIDS and preventive education for those at risk. As the premiere fundraising platform for DIFFA, Dining by Design attracts talents from all fields of design and the visual arts, this year hosted by fashion designer Tracy Reese and Iron Chef Geoffrey Zakarian. The super-celebrity gala honorees were longtime DIFFA supporters Isabel and Ruben Toledo and former board member Rick Wolf, president of

, who mingled among 42 table installations designed specifically for the event. Among them,

The next stop for the Dining by Design 2013 tour will be Kansas City on Saturday, April 13, followed by launches in Dallas, Detroit, Chicago and San Francisco. But first, DIFFA chairman Cindy Allen—

‘s own editor in chief—discusses why the organization is so close to her heart.

: In your eyes, what is DIFFA’S role in the design community?

the design community’s preeminent charity, and Dining By Design the answer—our fight—against the HIV/AIDS epidemic.

ID: What does the annual gala mean to you?

CA: We are an industry of makers, we build things, so I would sum it up as: designing, what we do best (those 42 installations prove it), dining, a close second, and most important, making a difference. What more can you ask for?! 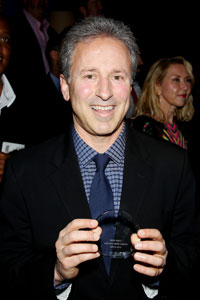 ID: What was special about this year?

CA: Because we wanted to remember

we are celebrating, this year we turned up the volume on DIFFA’s branding using hauntingly beautiful faces with the message “I want to make a DIFFArence.” It was a simple yet effective tool and the resounding commentary was that it made the event much more meaningful. We carried the message into our own installation (a collaboration with

magazine and Wolf-Gordon, and designed by Ali Tayar with Alejandro Cabrera of

). An abstracted interpretation of the last supper was meant to instead symbolize hope with people caring for one another…and this time titled just “Supper.”


ID: What significance does working with students add to the event?

CA: We challenged the student installations to think about the message.

students mentored by David Rockwell and Barry Richards of

deconstructed the closet—no longer a place of shame—but one of beauty and transformation. The

, purposefully omitted tableware to remind us what still needs to be done. 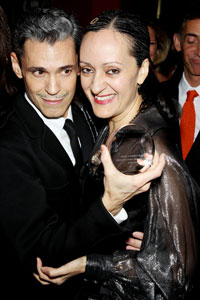 ID: How did DIFFA choose Isabel and Ruben Toledo and Rick Wolf as

CA: The dynamic design duo Isabel and Ruben Toledo were honored with the David Rockwell Service Award for their outstanding support of DIFFA for over 25 years. They have helped DIFFA since its forming in 1984 and used their creative manpower to help raise hundreds of thousands of dollars. Rick Wolf of Wolf-Gordon was awarded the Unsung Hero award for his longstanding support of DIFFA, having spearheaded $1.5 Million in contributions since 1992. Wolf-Gordon’s Gift of Hope program provides a percentage of every order placed at Wolf-Gordon and Rick sends a check to DIFFA every month—his company is the single largest contributor in the history of DIFFA. They are making an enormous DIFFArence!