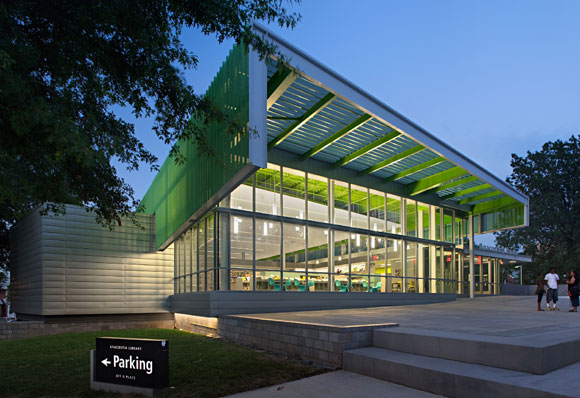 The SIGAL Gallery at the District Architecture Center

in Washington, DC, is highlighting a major overhaul to the century-old

system. In 2006, the DCPL began updating 17 of its 24 neighborhood libraries with the goal of bringing world class architecture to DC, and reinventing the very idea of a branch library. Called the Library Building Program, effort has attracted heavyweight architects such as


As seen in the exhibition, titled “Reinventing the Library: Washington’s New Centers for Learning”, 12 libraries are already complete and five others are in progress. Ginnie Cooper, DCPL’s head librarian, says the strategy was—and continues to be—simple: create spaces that are welcoming, filled with light, flexible, and comfortable. It seems to be working: there’s three times as much borrowing today as there was before the renovations began. And business-oriented classes are often standing room only.


“It’s our contribution to growing the economy,” says Cooper, always mindful of the large role libraries can play. Some in DC also have 3-D printers and other advanced technology that the public may not have access to at home.


Beyond LEED certification, the buildings have been winning awards inside and out, many in the area of sustainability, an extension of the system’s community focus.


“Reinventing the Library: Washington’s New Centers for Learning” is on view at The SIGAL Gallery at the District Architecture Center in Washington, DC through September 28.