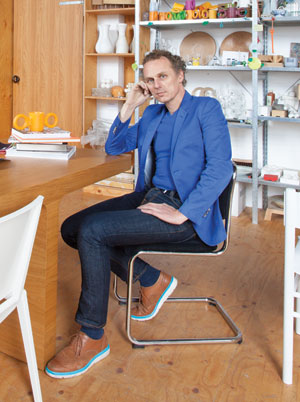 Prototypes, models, and other objects, representing a quarter century of work, jostle for space on every available surface at

, which occupies a 1950’s brick warehouse in Rotterdam, the Netherlands. “It’s a bit of a mess,” Richard Hutten says. . .before paraphrasing Albert Einstein: “If a cluttered desk is a sign of a cluttered mind, of what, then, is an empty desk a sign?” Nobody could accuse Hutten, one of the most cerebral members of the iconoclastic

collective, of having an empty mind. “For me, design is always about thinking,” he says. While he describes his house as being “like a gallery with nothing in it,” the studio is where he indulges his hoarder instinct. As he puts it, “I hate throwing away anything I’ve made.”


The studio’s human occupants—himself, two assistants, and an intern—are greatly outnumbered by the chairs. (He collects them.) Examples range from a beech plywood side chair by Wim Rietveld, Gerrit’s son, to a wax reproduction by Jerzy Seymour, plus Hutten’s own beautifully streamlined This Chair. All inhabit a 1,100-square-foot space that is spare, long, and light. When he moved in, he added windows, exploiting the industrial character of the building.


He made some of the furniture by hand. A hatstand combines 21 of his hugely successful double-handled cups for Gispen. (Half a million of them have sold, he reckons.) A shelving unit, constructed from stacked sheets of resin-dripped polystyrene reinforced with carbon fiber, is what he calls “a rock-and-roll object made with aerospace technology.” Subsequently, he translated the stacking idea into powder-coated steel for a dining table, again for Gispen. He’s the art director there.


That relationship hasn’t stopped him, however, from working with

. Also on the boards are interiors for the

in the Hague and the Amstel Botel, a floating hotel in Amsterdam. German furniture manufacturer

is a client now, too, much to his delight. “The inventor of mass production!” he says. “A lot of designers are scared of industrial collaboration. I see it not as making concessions but as struggling together to achieve the best product.” Something to keep in mind.