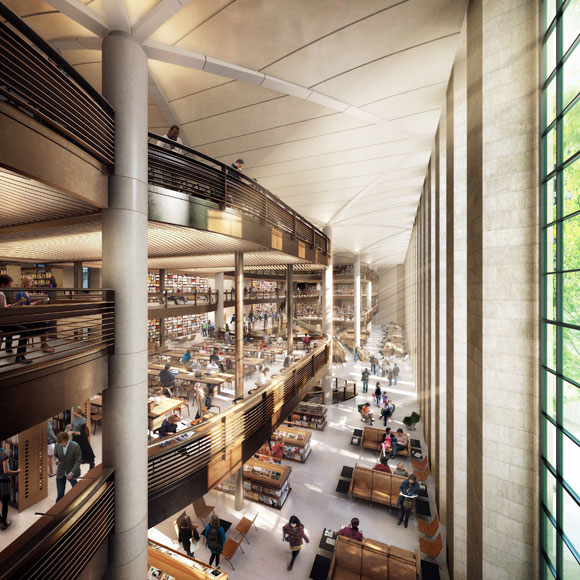 The structural points of the existing stacks will be replaced with a new vaulted stone-and-steel cradle.

approved a controversial redesign of the historic Stephan A. Schwarzman flagship of the

was originally selected by the library to oversee the reconstruction of the Carrère and Hastings beaux arts building in 2008. Now, over four years later, the schematic designs for the Central Library Plan have been released and approved, reigniting a hot debate over the structure’s fate.

The late Ada Louise Huxtable, celebrated architecture critic, devoted her final review to the renovation, and a letter of protest against the project has been signed by over 1,000 writers and scholars. The outcry came to a head midway through last year as the library solicited a public dialogue about the project in February. Would the city landmark become a hotspot for the digital generation, demoted to a mere “Internet café,” as

argued? Will the plans preserve the soul of the building, as

printed in Huxtable’s review, will the structure become a “hollowed-out hybrid?”

The balconies will overlook Bryant Park through the west façade windows.

Primary among the multiphase renovation will be the complete overhaul of the seven stories of book stacks below the Rose Reading Room. The books in this area will be removed to a large humidity-controlled chamber underneath Bryant Park, which was created in 1989 as part of the park’s excavation and will be expanded in the coming years. Sending the books to this subterranean storage will free the floors of the west façade. A series of balconies overlooking the grand windows and the park are planned, complete with study spaces and lounges. 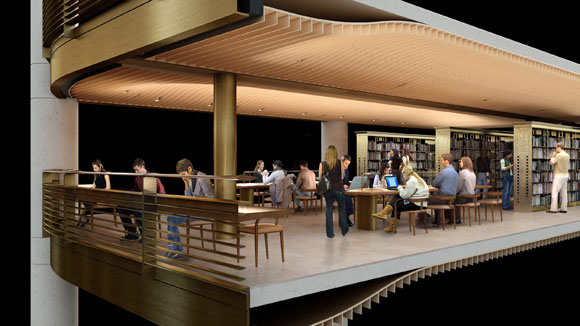 New study spaces and lounges will replace the stacks.

When finished, the NYPL redesign will consolidate the Mid-Manhattan book collections and Science, Industry and Business Library into the Schwarzman Building. The architects also claim that the restructuring will more than double the amount of public space in the building. However, iconic spaces such as the Rose Reading Reading and Astor Hall will remain untouched. And of course, the marble “Library Lions” will continue to greet visitors to the library.

The estimated budget is now north of $300 million. The NYPL anticipates construction to begin as early as summer of 2013 with completion projected for 2018.

The library plans to display archives in the Gottesman Exhibition Hall.