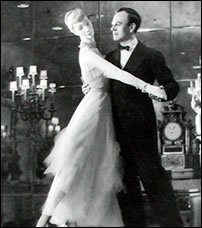 It presents a bit of a challenge to condense the career of Gene Moore into a short skinny paragraph. Take time spread alone. Born and raised in Birmingham, Moore went to Chicago Academy of Fine Arts and came to New York at age 25. This was in the mid-30s, hardly a moment of affluence. Still, he made do as delivery lad, busboy and cruise waiter, improbably progressing to the post of display assistant at I. Miller, then the town’s toniest shoe shop. The display route led to Bergdorf Goodman, Delman, Bonwit Teller and, in 1955, on to Tiffany. There, during his almost 40-year reign as the wizard of window design, he attracted record numbers of Fifth Avenue and 57th Street storefront gazers; a pilgrimmage to his Christmas scenes became a tradition for locals and out-of-towners alike. Even while directing displays at the store, he managed to create theatrical costumes and sets, curate museum exhibits, design interiors and products, prove himself an expert photographer and win a bundle of variegated prizes.  – MG