wants to make sure the late mid-century designer Russell Spanner gets his due. Though not a household name like many of his contemporaries, Spanner is one of Canada’s design icons and his pieces are rare and highly collectible. Gus* recently announced that it has resumed production of Spanner’s Lounge Chair with Arms. Designed in 1950, the iconic chair features a woven-web seat with a formed plywood backrest and those sharp, clean angles that embody typical post-war design. (It’s rumored that Spanner, an amateur wrestler, tested his pieces by hurling them across his shop to see how they held up on impact.)


“Spanner has never received the widespread recognition that he deserves for his work,” said Matt Parass, president of Gus*. “He was ahead of his time: Experimenting with innovative materials and designing furniture for smaller, open-plan homes which were being built in postwar cities.” Gus* worked closely with Spanner’s family to bring the iconic chair back to life and to ensure it would meet the designer’s original intention and specifications.


Lounge Chair With Arms will be available in six different finish options. The first 100 chairs produced will be part of a numbered series which will include a certificate of authenticity. Available exclusively through Gus* retailers starting in May 2014. 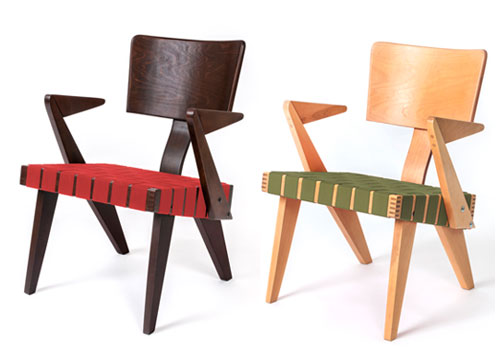