The Houdini of design. That’s how Sanjit Manku refers to Patrick Jouin, his Jouin Manku Studio cofounder. Just as the legendary escape artist would extricate himself from seemingly impossible situations, Jouin likes to work within a set of almost improbable parameters. “He has this love of constraints,” says Manku. “It’s almost a game. If you give him 50, it’s not enough. He wants 75.” 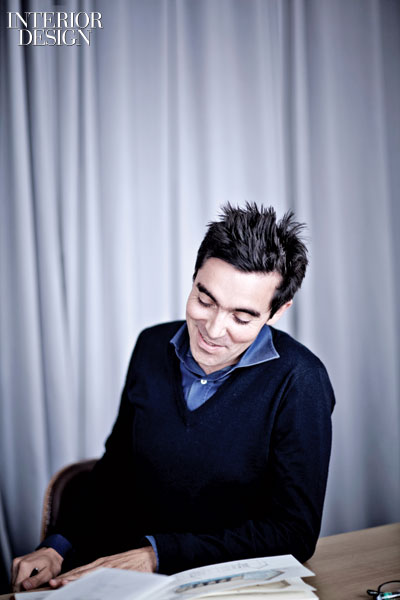 That approach has proved hugely successful. Today, the Paris-based Jouin is not only considered to be one of France’s most acclaimed designers, he is also one of the most versatile. Among his products are the Pasta Pot sauce pan for Alessi , the Thalya chair and Optic storage cubes for Kartell , and the Tarti Nutella spatula for lovers of the famous hazelnut spread. His stellar projects include a house in Kuala Lumpur, Malaysia; the Paris and Hong Kong flagships of Van Cleef & Arpels ; and restaurants for star chef Alain Ducasse . Jouin’s designs are also omnipresent on the streets of the French capital, from a bus stop near the Bastille and Vélib’ rental-bike terminals to public toilets known as Sanisettes. Jouin claims the latter is the project of which he is most proud. “Once you embark upon industrial design, you dream of becoming part of the cityscape,” he says.

Jouin was born in 1967, in the western French village of Mauves-sur-Loire. His mother was a nurse, his father a craftsman who made mechanical parts for various machines. Jouin considered becoming a cartoonist, a surgeon, or an architect, but eventually enrolled at the École Nationale Supérieurede Création Industrielle in Paris. Upon graduation, he was hired by Philippe Starck to work for Thomson Multimedia and then spent five years at Starck’s own firm. “People often assume that I’m his protégé,” says Jouin, “when, in fact, I stopped working for him 14 years ago.” Still, he does recognize a certain debt. It was Starck who introduced him to furniture design and taught him just how essential curiosity is for a designer.

Curiosity is a trait he shares with Ducasse, with whom he started collaborating shortly after opening his own eponymous practice in 1998. The chef’s three-star Michelin restaurant, Alain Ducasseau Plaza Athénée , was Jouin’s very first interiors commission. “Patrick possesses a quality that is rare among creators: Helistens attentively,” says Ducasse. “This talent plus his obsessive passion for details are key to the success of our projects,” which also include Jules Verne in Paris and Mix in New York and Las Vegas.

The other important figure in Jouin’s professional life is Canadian-trained architect Manku, who has been his associate since 2006. Together, they oversee Jouin Manku Studio, which counts a “James Bond–style” house in London, a winery in the Bordeaux region, and the renovation of the 12th-century Abbaye de Fontevraud in Anjou among its current projects. Jouin also runs a separate company, Patrick Jouin ID, specializing in industrial design. In the planning stage is custom furniture for his country’s Ministère de la Défense , being designed by Agence Nicolas Michelin & Associés and due to open in Paris in 2014.

Whatever the task, most of Jouin’s creations share stylistic similarities. Lines are often sensuous and sheltering. He strives for purity, imbued with the unexpected. “One of my principal themes,” he says, “is to create a sense of wonder.” He endows objects with tactility, places great emphasis on functionality, and avows a fascination for avant-garde technology and traditional craftsmanship—his collaborators range from rapid-prototyping technicians and stereo lithographers to Murano glassblowers. More than anything, his overriding concern is novelty. “Repeating myself is a constant worry,” he says. Fortunately for clients and fans, that constant concern most often translates into our constant delight.