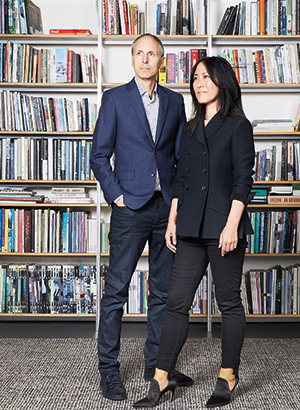 They began in academia. Lisa Iwamoto and Craig Scott each taught architecture at the University of Michigan, before returning to their California roots: she as a professor of materials and fabrication at the University of California, Berkeley, he of architecture and design at California College of the Arts in San Francisco. “A lot of people do that, though,” Iwamoto begins. They also happen to have impeccable academic credentials themselves, both earning a master’s in architecture with distinction from Harvard University Graduate School of Design. “But we wanted to build things, too.” So, in 2002, they established IwamotoScott Architecture, shortly after marrying at San Francisco City Hall, to experiment, explore, and “do fun things on the side,” she continues. The clients would come.

With CNC technology just entering the scene, the architects simultaneously immersed themselves in materials studies, hand-making chairs out of aluminum or swimming-pool noodles. Iwamoto and Scott were harbingers of the maker movement before the term even existed.

For more practice, they built full-scale installations with students at Berkeley. “We were thinking about the landscape of the Bay Area and conceptualizing ideas,” Scott recalls. Fully designed but unbuilt, their theoretical Fog House melded modern architecture with a response to San Francisco’s renowned
climate condition.

Growth, Iwamoto says, was “completely organic.” She and Scott entered compe­titions. With the MoMA PS1 Young Architect Program, they achieved finalist status. Invitations for installations soon followed, “Open House: Architecture and Technology for Intelligent Living,” in Essen, Germany, co-curated by Vitra and the Art Center College of Design in Pasadena, California, among them, in which their Jellyfish House conceptualized a solution for reclaimed water in San Francisco Bay. Voussoir Cloud, at SCI-Arc Gallery, was a staggering composition of vaults and arches in laminated wood that “brought together our interest in structures, materials, and form,” Scott states. “We were getting things out there,” Iwamoto says of the time period.

Their first built commission, in 2010, was a gift from an architect friend. “He was too busy, and the job was too small,” Iwamoto says. Although just a 1,000- square-foot guest house, the project feels grand because of its celebratory courtyard and wood-paneled entry.

That same year, the firm’s lobby for a San Francisco commercial building won an Interior Design Best of Year Award, its coffered ceiling resembling a waterfall of lanterns. Soon after, Obscura Digital, an interactive media company, came calling in need of help designing its office in a 1940’s warehouse in the city’s scrappy Dogpatch neighborhood. Scrappy themselves, Iwamoto and Scott took the low-budget job in exchange for free rent for their first studio, a wall of sheet-metal bookcases the only separation between the architects and Obscura. “But it gave us a quite a showplace,” Iwamoto says.

That’s when Michael Bloomberg appeared on the scene. Transitioning from New York mayor back to CEO, he was looking for a local firm to make his San Francisco tech hub, Bloomberg R&D, “sophisticated and grown-up,” Scott notes. Obviously, larger firms were in play. “But we were chosen for our material sensibility and detail level,” Scott explains. Among the project’s standouts is a starburstlike ceiling canopy of white oak slats.

Pinterest came along in 2015. With office commissions in New York and two in San Francisco, it’s arguably the firm’s largest client. Common to all sites are articulated ceilings and organizing central stairways designed not just as circulation devices but also as true place-making venues.

IwamotoScott designs houses, too, and they’ve become more elaborate. A lakeside house in Napa, for example, is organized around a rhombus-shape courtyard. Back in San Francisco, the firm is currently stretching its scale with Portola Housing, a city block dense with single-family dwellings plus three apartment buildings.

Both principals work on all projects from their 3,000-square-foot office, now located in Potrero Hill on the edge of the design district, intentionally keeping numbers small: 12 employees and six to eight projects at a time. Conveniently, the couple resides just five blocks away in an Edwardian town house dating to 1926. Although linked together since 1986, their personality types couldn’t be more different. Iwamoto is forthcoming and effervescent. Scott is shy and reserved with “an encyclopedia knowledge of architecture,” according to his wife. In other words, they’re a perfect match.