Harry Hinson, A Stalwart of American Design, Dies at 76 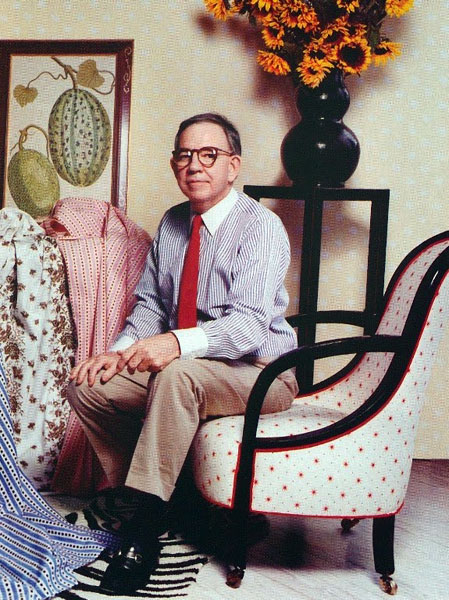 Photo courtesy of The Peak of Chic.

The passing of Harry Hinson, a pillar of the design industry, symbolizes the fading of a supremely influential generation. Known for his fine, hand-screened wallpapers and coordinating woven fabrics inspired by historical patterns, Hinson refashioned these motifs into a classic, modern American aesthetic for livable designs. A favorite among decorators,

blends traditional and modern aesthetics using splashes of colorful dots in the style of abstract expressionism. His signature pattern, the heavy grass wallcovering

, has been widely reproduced.


“He [Hinson] was a visionary whose contributions were invaluable,” says

Andrea Rubelli, president and CEO of Donghia and Rubelli

in 2011 and recently added the Hinson brand and design library, forming a destination for 20th and 21st century icons.


A trustee of the Kips Boys and Girls Club, Hinson chaired the organization’s

for 33 years. “Harry was beloved for his dedication and commitment in taking a nascent endeavor and turning it into a major fundraiser,” says fellow trustee Gary Crain. Other memberships included Decorators Fabrics Association and the


A North Carolina native, Hinson was a true southern gentleman, retaining his lilt and innate charm as he rose through the corporate ranks. After graduating from the College of William and Mary in Virginia in 1962, he entered Bloomingdale’s training program and became an apprentice to the store’s acclaimed interior designer, Barbara Darcy. Hinson later caught the eye of Bonwit Teller’s famed president Mildred Custin, who hired the rising star as director of architectural design and store planning for its burgeoning suburban branches. Custin appointed the 27-year-old Hinson as the elite retailer’s youngest vice president.


In 1968, while continuing at Bonwit’s, Hinson co-founded Quadrille Wallpapers and in 1972 formed Hinson & Company. He later expanded into interior decorating by incorporating Hansen Lighting and Mrs. MacDougall’s antique and fine reproduction furniture and decorative accessories. Clients ranged from the likes of fashion designer Bill Blass to Hermes and the venerable antique jewelry connoisseur James Robinson, Inc.


In the 1980s, Hinson designed wallpaper and fabrics for the New American Wing Collection of the Metropolitan Museum of Art, followed by a commission to design Wildflowers of America for Lady Bird Johnson’s National Wildflower’s Collection, for which he introduced a second line in 2003.