How Muuto Helped Usher in a New Chapter for Scandinavian Design

This year, Danish furniture and homeware brand Muuto celebrates 10 years of pioneering a new generation of Scandinavian design. With consistent growth since its inception in 2006, and with a rapidly growing team of just over 100 based in the center of Copenhagen, Muuto is showing no signs of slowing down. We met with co-founder Kristian Byrge to find out the secrets behind the company’s success. 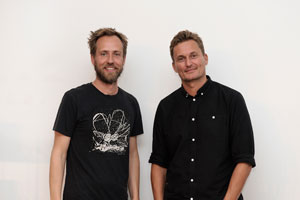 Interior Design: How did Muuto come into existence?

Kristian Byrge: I have a Masters in business administration and strategic management, and I met Peter Bonnén, the other Muuto co-founder, when I was working as a management consultant. When we looked at the Scandinavian market, we saw that there were some very good companies, but their turnover was mostly based on classics with just a few new objects launched each year.

So although we thought Scandinavian design was great in the ’50s and ’60s, we decided it was now time to start a new chapter. We knew we had great base of designers, production facilities, and good people to hire, so we felt like we had the foundation to build a new golden age. That was the vision from the beginning: to be the front-runners of a new Scandinavian design.

KB: Design is part of our culture here. We feel like Scandinavian design has some great values that work not just in Scandinavia but across the world.

What we try to do at Muuto is to marry the core values of Scandinavian design with our new perspective. It’s about long-lasting design and good craftsmanship—when you design something, it’s there for a reason. That’s a key part of our brand. We try to build on top of that with new materials, new techniques, conceptual thinking, and allowing lots of creative freedom.

ID: How has this approach to Scandinavian design affected the market?

KB: When we started the company, most people were buying classics, but right now it’s really different. A lot of young people mostly buy from the new brands. There’s been a big change in the last 10 years, and of course I hope that we’ve had something to do with that along with others.

ID: Where do most of your sales come from?

KB: Right from the very beginning, we knew we had to do a premium distribution as 90% of our sales are outside of Denmark. Wholesale still makes up the main part of our turnover, but our contract market is rapidly increasing. I imagine that in three to five years it will more like a 50/50 split between the two.

ID: How many products do you introduce each year?

KB: We like to launch on average 10-12 new design families each year. For instance a lamp in a range of different colors is counted as one design family. On top of that, we have a lot of line extensions. So this is quite a lot compared to Louis Poulsen but compared to Ikea it’s not a lot. It’s about finding the balance, because our output also needs to be set at a pace in order for our retailers to absorb it.

ID: Where are Muuto’s products made?

KB: Furniture is made in Europe. Accessories and lighting pieces are made in either Europe or Asia depending on the material. For example, they are very good with porcelain in Asia, but for furniture we only use European factories.

ID: What would you say is the biggest challenge for Muuto?

KB: The biggest challenge is to present affordable luxury; you will find our stuff in the best shops alongside the best design, but it’s more affordable compared to brands like Vitra or Fritz Hansen. It’s a new and growing market. Before you just had low, medium, and high design, but now you have affordable luxury. It competes on a quality and design level with the designer brands. We want to make things that last for many years, both functionally and visually, so we don’t pay much attention to trends, which is really an integral part of the Scandinavian design tradition.

ID: How do you select which designers to work with?

KB: Since we’ve been working with Scandinavian designers for quite some years, now we have a long list of possible designers we can work with, both young and established. It’s very much a case of matching the brief to the abilities and profile of the designer.

We spend a long time preparing a good brief that is well thought through, and then the designers come back to us with a range of options and directions. We talk about which one is the best, and then we make the prototype and find the place to produce it as we don’t have our own production facilities. So we’re very much part of the creative process.

ID: What is Muuto’s approach to sustainability?

KB: If you make something that’s sustainable but not as good looking or more expensive, the majority of people will buy the more attractive, cheaper version. So for instance, our Fiber chair [a shell chair designed by Iskos-Berlin that’s made using recyclable plastic and wood fibers] is almost the same price as an equivalent polypropylene chair, so it’s affordable and it’s a nicer finish.

We need to make it an obvious choice rather than a compromise. You can’t just point the finger at the end consumer; it starts with the manufacturers.

ID: What are your hopes for the next five years?

KB: I would like us to move from being a European-focused company to a truly global company. To bring the products, the vision, and the brand to Asia and North America and to be stronger in Europe. We want to continue creating better and better products based on our core values—things that people will enjoy using for a long time.