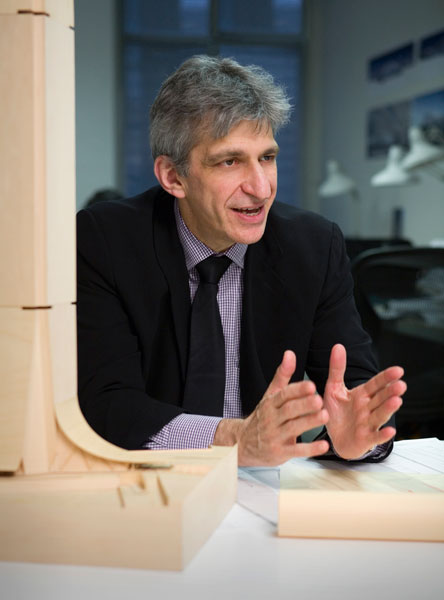 It is with profound respect that we pay homage to the enormous global contributions of Paul Katz, managing partner at

since 1984. Katz died November 20, 2014 at Memorial Sloan-Kettering Hospital in New York after a brief battle with cancer. He was 57 years old.


A tall, imposing figure with a deep, mellifluous voice, Paul Katz propelled himself through life, by charismatically including and inspiring all those around him with his extraordinary intelligence, optimism, pragmatism and intellectual curiosity.


He daily found in people talents they did not know they possessed and insisted that they develop them. A generous mentor with his time and resources, he ran KPF Associates, a global firm of nearly 700 people, while also serving as a devoted husband and father.


He is survived by his wife, Ziva Freiman, an architect and journalist whom he met as an undergraduate at the Israel Institute of Technology. They married at age 20 and then moved to Princeton University, where Paul completed his graduate studies. His son Jonathan is currently a graduate student at Oxford University and his daughter Hannah studies at the Maryland Institute College of Art.


A lover of culture, the arts and design, Paul Katz was an avid traveler, relentlessly circling the globe in service of meaningful connections, remarkable people and a vision to dynamically anticipate, model and evolve the worldwide landscape of interconnected cities. As a native South African, Paul made New York his adopted home, while maintaining his stature as a registered architect in Hong Kong, Singapore and Japan.


Since joining Kohn Pedersen Fox in 1984, Paul Katz focused on the significant role of high rise structures as the building type of the century, playing a vital role as a dynamic leader and advocate for global architecture. As a designer of dense urban projects, he was considered among the foremost experts in well-designed infrastructure, master planning and the lessons provided by his extensive built works in Asia, the Middle East and United Kingdom. He is succeeded at KPF by Princeton classmate and colleague of 32 years, Jamie von Klemperer.


Services will be held today at Temple Israel Center in White Plains, New York. Donations in lieu of flowers may be sent to the KPF Foundation for an academic scholarship in his name.

This article has been adapted from Kohn Pedersen Fox Associates.