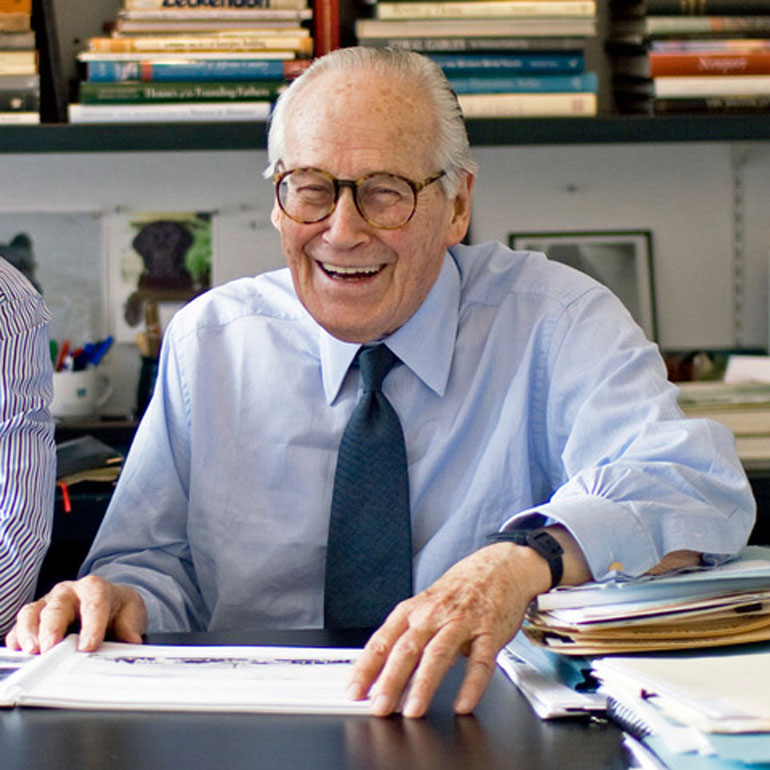 American architect and urban planner Jaquelin Taylor Robertson, or Jaque—a founding partner of Cooper Robertson known for private residential builds and large-scale projects alike—passed away Saturday, May 9. He was 87 years old. “It is with heavy hearts that we mark the passing of our partner, colleague, mentor and friend,” notes a statement released by Cooper Robertson, a firm with a portfolio ranging from an expansion of the Edible Academy at the New York Botanical Garden in the Bronx to a renovation of the Museum of Westward Expansion under the Gateway Arch in St. Lous.

Cooper Robertson got its start in the late 1980s when Robertson joined forces with his longtime friend and former Yale classmate, Alexander Cooper, along with David McGregor and Brian Shea. The four formed what was then known as Cooper, Robertson & Partners, laying the foundation for the firm’s present-day culture of openness and collaboration. Shortly after establishing the firm, Robertson worked on the design of Celebration, Florida, a planned community developed by Disney, which has since become a project synonymous with his name. “Over the course of his long, fruitful and rich life, Jaque’s accomplishments were innumerable, extraordinary and widely varied. He had a staggering breadth of life experiences and a seemingly bottomless well of talents; always setting the bar high, holding to the highest of standards and accepting nothing short of excellence, first in himself, and in his partners and colleagues as well,” his colleagues remarked in the statement.

Robertson went on to win a national design award in 1991 from the American Institute of Architects for a private home in East Hampton and, the same year, Cooper Robertson also earned one of the institute’s urban design awards for its vision of Battery Park City in Lower Manhattan—an unprecedented double win at that time. Robertson later took home the Thomas Jefferson Medal in Architecture in 1998 and the Driehaus Prize, a global award presented by the University of Notre Dame School of Architecture to honor a major contributor in the field of contemporary vernacular and classical architecture, in 2007.

Colleagues recall Robertson’s passion for custom tailored suits, opera, classical music, books, sports, animals and—above all—urbanism, architecture, and design. “Jaque mentored and instilled certain values in dozens of young architects over his career—many of whom are still with Cooper Robertson, and many others who are practicing elsewhere across the globe. That is, perhaps, his greatest gift to the profession and the culture; perhaps his greatest legacy. We will miss him. He will be roundly missed, and never forgotten,” they added.

Robertson is survived by his wife of 58 years, Anya Sohn Robertson, as well as his sister, Catherine “Kitty” Robertson Claiborne of Virginia.