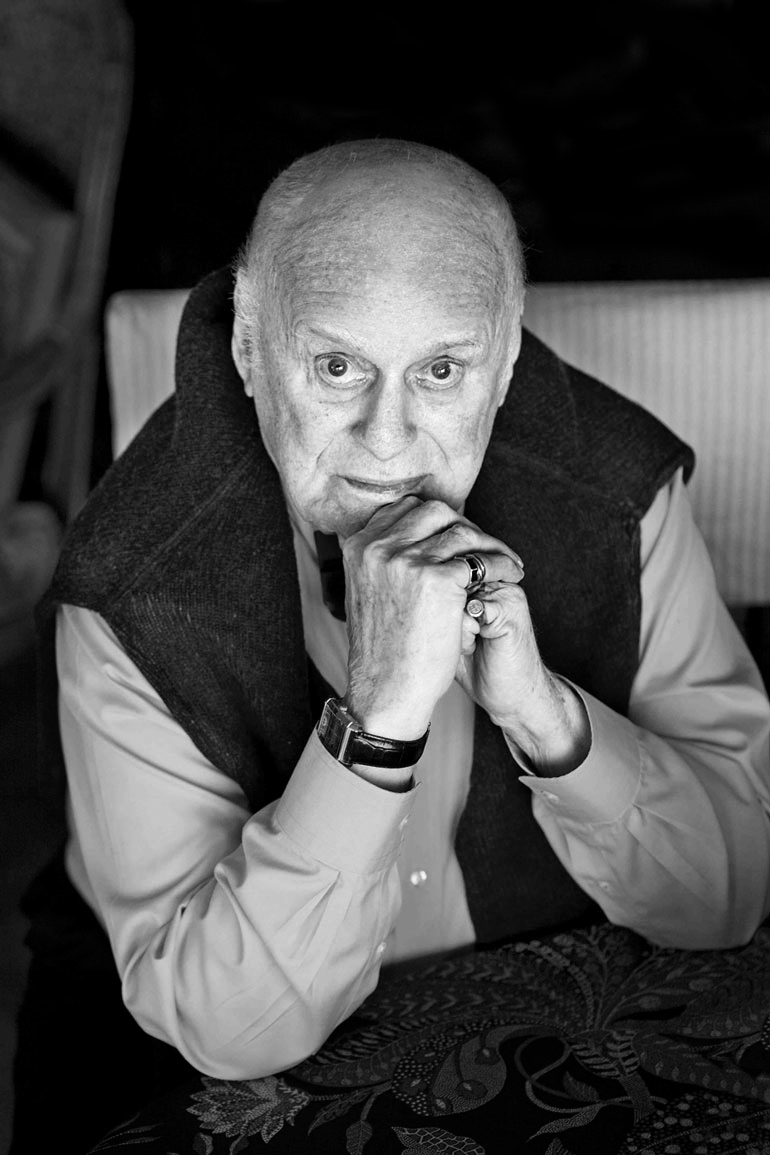 Renowned artist Jeremiah Goodman passed away on September 7. He was 94.

Goodman illustrated our magazine’s monthly covers for 15 years until 1967, resulting in his Hall of Fame induction two decades later.

Born in Niagara Falls in 1922, Goodman was creative from a young age. After enduring a right-hand injury, he occupied himself with a box of crayons—an experience that eventually turned him left-handed. Goodman aimed to move to Los Angeles to pursue set design. He then met British actor Sir John Gielgud in 1948, who introduced him to painting room portraits and still lifes—a pursuit he would perfect throughout his life.

Goodman stayed in New York and quickly established himself in the cultural cognoscenti by landing commissions for star-studded clients, including TV producer Daniel Melnick and costume designers Edith Head, Gilbert Adrian, and Tony Duquette. He started working for Lord & Taylor in 1952, where he illustrated rooms, furniture, and fashion accessories for the brand’s newspaper ads. This gig earned him placements in a bevy of high-profile publications, including Interior Design, the New York Times, and Harper’s Bazaar. He then started painting interior portraits for world-famous clientele: Pablo Picasso, Ronald Reagan, Carolina Herrera, and Diana Vreeland all let Goodman inside their private residences.

Illness may have slowed Goodman down later in life, but the 2007 monograph Jeremiah: A Romantic Vision (PowerHouse Books) kicked off a career resurgence. Cartier, Dedon, and Acne all commissioned him, and fellow Interior Design Hall of Fame member Lee Mindel frequently asked Goodman to illustrate presentation drawings for clients. “Goodman has a unique ability to communicate ideas and atmosphere through abstraction—his broad dabs of paint produce an almost reverse-pixelization effect similar to that of the convex mirrors hovering above Vermeer’s compositions,” Mindel says.

In 2016, the American Museum in Britain showcased the first international retrospective of Goodman’s work, and most recently, he enjoyed a 70-year career retrospective in Los Angeles at the Dessin Fournier Gallery. His paintings can be found in the collections of the Metropolitan Museum of Art, the Cooper-Hewitt National Design Museum, the New Britain Museum of American Art, and London’s Victoria & Albert Museum.

The architecture and design community, including Interior Design editor in chief Cindy Allen, took to social media to remember Goodman and his impact on the profession.

Honoring the extraordinary life and talent of Jeremiah Goodman: October 22, 1922–September 7, 2017…His illustrations graced the covers of @InteriorDesignMag in the 50s and 60s… #JeremiahGoodman #goforthandDESIGN

In Honor of Jeremiah Goodman 1922-2017 Several years ago, @leemindel visited the studio of renowned artist, Jeremiah Goodman, and documented it from behind the keyboard and lens for @archdigest , #ArchitectsEye. ???????????????????????????????? Originally with dreams of becoming a Hollywood Set Designer, Jeremiah Goodman concentrated his talents on creating renderings of interiors – unlike the industry had seen before. With formidable clients and friends such as @lordandtaylor , @dvdianavreeland , @carolinaherrera , Cecil Beaton, Bruce Webber, Greta Garbo, Elsa Peretti, Betsy Bloomingdale, Philip Johnson, @skidmoreowingsmerrill , Edward Durrell Stone, Frank Lloyd Wright, @dorothydraperco , Edward Albee, Duke and Duchess of Windsor, Ronald Reagan, and more – the popularity of his portrait work, was also noticed by @nytimes , @harpersbazaarus , @houseandgardenuk , and @interiordesignmag , whose covers he regularly illustrated and from whom he received the prestigious Hall of Fame Award in 1987 for recognition for his contribution in the field of interior design ???? Lee spent hours with the legend who is known for saying: “one’s memory of a room is more accurate than a photograph.” ?????????????? Surrounded by past projects, dreamscape-like pastel temperas, renderings of high-society homes, and Goodman’s distinctive oeuvre, @leemindel elaborates on his friend’s talent: “Goodman has a unique ability to communicate ideas and atmosphere through abstraction—his broad dabs of paint produce an almost reverse-pixelization effect similar to that of the convex mirrors hovering above Vermeer’s compositions.” Here’s to their friendship and to Goodman’s legacy??????????????For more on Lee’s up-close report of his studio visit with Jeremiah Goodman, please visit: https://www.architecturaldigest.com/story/tae-jeremiah-goodman-articles

Saddened by the news the great @jeremiah_goodman passed on this morning. One of the most amazing talents and a true gentleman – farewell! . .. … #jeremiahgoodman #jeremiah #rip #goodbye